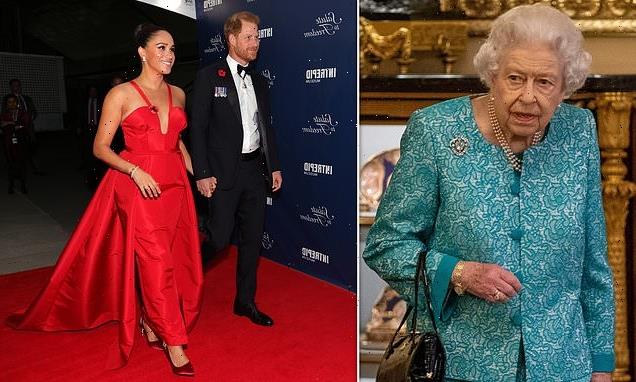 Harry and Meghan ‘won’t join Queen at Christmas’: Couple ‘turn down invitation to go to Sandringham with rest of royal family for festive season’

Prince Harry and Meghan Markle will not be returning to the UK for Christmas despite being invited to join the rest of the royal family at Sandringham, sources have claimed.

The Duke and Duchess of Sussex, who are currently living in a $14million mansion in California, are also expected to miss the Queen’s annual Christmas lunch for her extended family, which is usually held at Buckingham Palace.

The lunch is expected to be held at Windsor Castle this year, as the Queen continues to recuperate from a bad back which forced her to miss the Remembrance Sunday service at the Cenotaph.

It’s thought that Harry and Meghan turned down the invite because they want to avoid the media coverage that would follow a visit to the UK.

A royal source told Page Six: ‘There’s a lot that goes into the logistics and the planning of the family Christmas, so of course, staff know that Harry and Meghan are not coming. If they were, they would have communicated it to their family by now.

‘But this is Her Majesty’s first Christmas without her husband, so one would have hoped they would want to be with her.’ 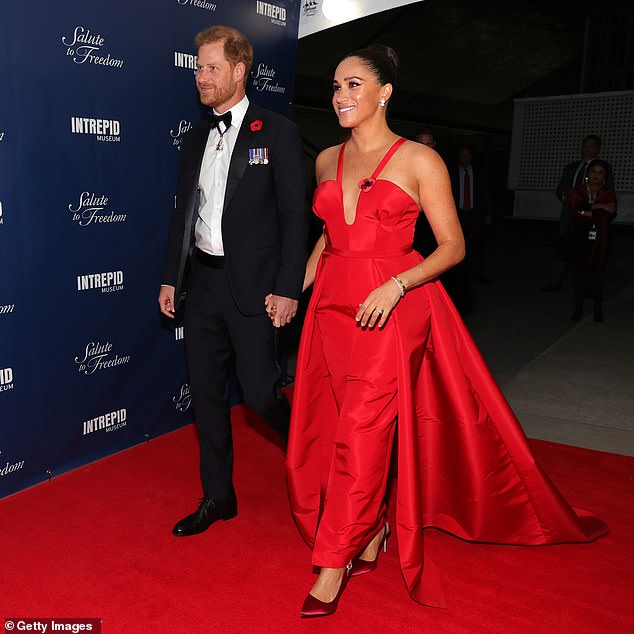 Duke of Sussex and Meghan, Duchess of Sussex attend the 2021 Salute To Freedom Gala at Intrepid Sea-Air-Space Museum in New York. They are said to have turned down an invite to celebrate Christmas with the royals 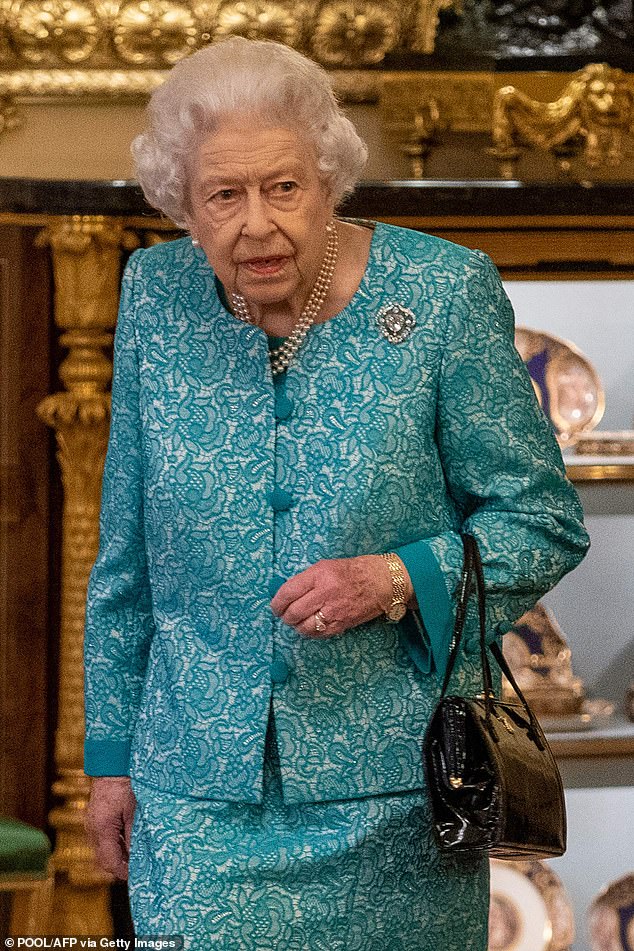 Over Christmas, the Queen is usually joined at Sandringham by Prince Charles, Camilla, Prince William and Kate Middleton, who accompany her to a church service

This year is the Queen’s first Christmas without Prince Philip after his death in April.

The monarch, 95, has also suffered with several health problems which forced her to miss events recently and even triggered a short hospital stay.

The last time Harry and Markle were at Sandringham for Christmas was in 2018, a year before Megxit.

Over Christmas, the Queen is usually joined at Sandringham by Prince Charles, Camilla, Prince William and Kate Middleton, who accompany her to a church service.

Buckingham Palace refused to comment on the report. MailOnline has contacted representatives for the Duke and Duchess of Sussex.

It comes as Meghan made a surprise appearance on the Ellen show in her first major TV interview since her notorious Oprah tell-all alongside Prince Harry amid fears she may be about to drop more bombshells about the Royal Family.

In a clip released ahead of the broadcast in the US tomorrow, the Duchess of Sussex reminisced about being a struggling actress who would arrive for auditions in a bashed up second hand car.

Meghan, wearing a white £1,991 Oscar De La Renta blouse and black trousers, said the Ford Explorer had ‘a life of its own’ and broken front doors that she couldn’t afford to fix so she had to climb ‘out of the trunk’.

Her new TV appearance came as a shock today. It was long rumoured that the Duchess would give her first interview to Ellen after she and Harry emigrated in January 2020. But in the end the Sussexes chose their neighbour in Montecito, Oprah Winfrey.

The clip will raise fears in Buckingham Palace that she may be about launch a fresh attack on the royals, who the Sussexes have previously accused of racism towards Archie and allegations they ignored Meghan when she claimed to be suicidal while pregnant and living in London.

Meanwhile, the Queen was seen standing unaided today as she held a face to face audience at Windsor Castle, in her first official engagement since missing Remembrance Sunday at the Cenotaph after spraining her back. 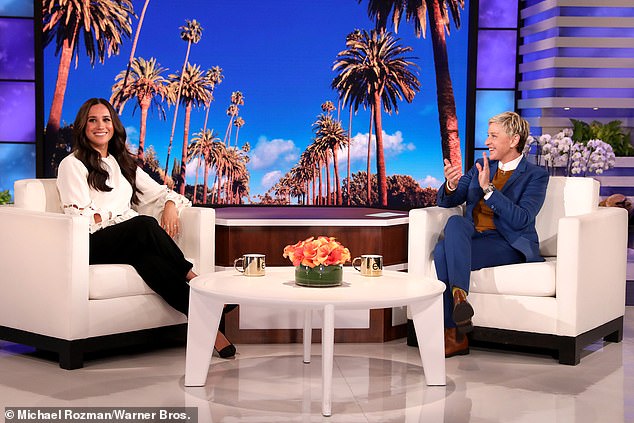 Meghan Markle, 40, reminisces about being an actress during an appearance on the Ellen show which is set to air tomorrow

The monarch, 95 – dressed in a green, orange and white floral dress and wearing a string of pearls – was pictured sharing a brief conversation with General Sir Nick Carter, Chief of the Defence Staff.

The military audience in Windsor’s Oak Room – a sitting room that doubles as a private office – was Her Majesty’s first in-person audience since she hosted a global investor summit at Windsor on October 19.

Sir Nick walked through the door to be greeted by one of the Queen’s dorgis, before approaching the monarch for a chat.

Her Majesty described his upcoming retirement as ‘rather sad’, to which he replied, ‘eight years, it’s a long time’, before mentioning that his only predecessor to have served long was Lord Mountbatten, the Queen’s cousin.

The general added that he thought ‘the time had come to move on and do other things.’

Her Majesty was also left unable to attend the Church of England’s national assembly yesterday, for the first time in her 69-year reign.

Prince Edward, her youngest son, read out a speech on his mother’s behalf at the Church of England synod yesterday.

Her statement read: ‘It is hard to believe that it is over 50 years since Prince Philip and I attended the very first meeting of the General Synod. 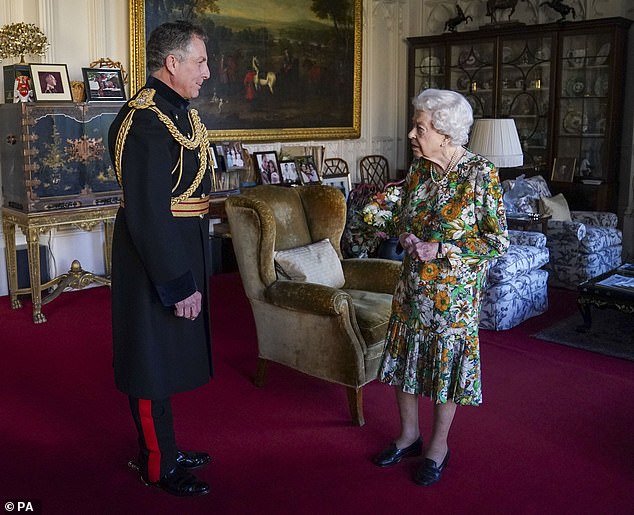 The Queen was seen standing unaided today as she held a face to face audience at Windsor Castle, in her first official engagement since missing Remembrance Sunday at the Cenotaph after spraining her back. The monarch 95 – dressed in a green, orange and white floral dress and wearing a string of pearls – was pictured standing as she greeted to Gen Sir Nick in Windsor’s Oak Room

‘None of us can slow the passage of time; and while we often focus on all that has changed in the intervening years, much remains unchanged, including the Gospel of Christ and his teachings.’

Her Majesty also spoke remotely to delegates at COP26 in Glasgow, urging world leaders to reach decisive climate change deals as she warned ‘none of us will live forever’.

Prince Charles was asked about the Queen today on his trip to Jordan. He said: ‘She’s alright, thank you very much. Once you get to 95, it’s not quite as easy as it used to be. It’s bad enough at 73!’

The last comment was a reference to his own birthday on Sunday.