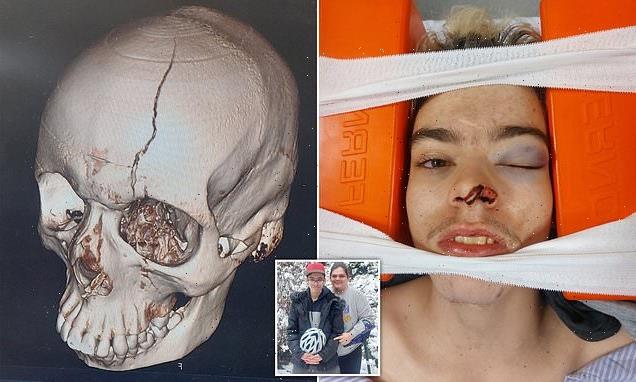 Pictured: Harrowing injuries chef, 17, suffered after hitting a tree root and being thrown from his bicycle while cycling to work – leaving him with a fractured skull and cracked ribs

A chef suffered a fractured skull and cracked ribs after being thrown from his bike on his way to work in a freak accident.

Bradley Thompson, 17, had been cycling to work as a chef at the local pub in Longfield, Kent, in September when he was thrown from his bike when he hit a tree root.

The teenager had promised his mother, Simone, 40, that he would wear his helmet but left it in his bedroom when he set off with younger brother Harrison, 15.

Bradley’s bike wheel hit a tree root during a short cut through the woods. He was catapulted into a tree leaving him with a bleed on the brain, a fractured skull, a fractured spine and cracked ribs. 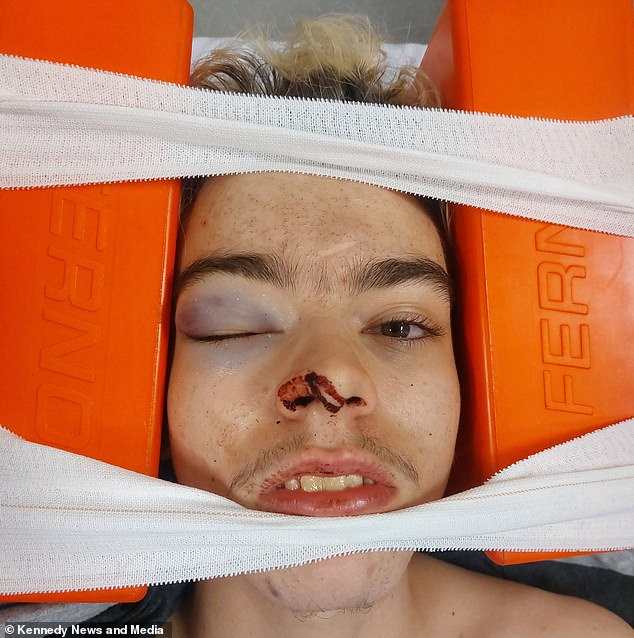 Bradley’s wheel hit a tree root when he took a short cut through the woods to get to his work as a chef. He was launched from his bike into a tree 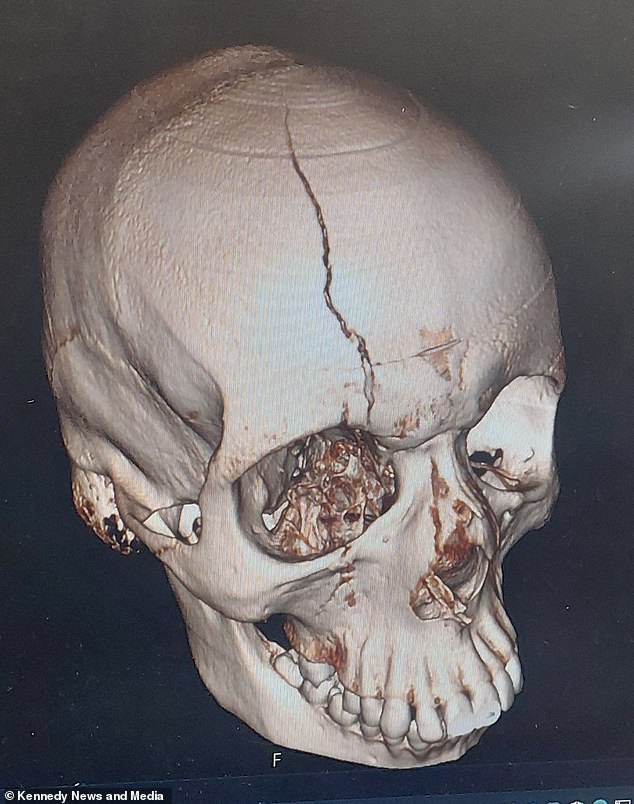 A scan showing Bradley’s skull fracture. The 17-year-old suffered a fractured skull and cracked ribs and was lucky not to need emergency surgery

Harrison called an ambulance and Bradley was stabilised by medics before firefighters arrived to carefully carry him out of the woods.

To avoid causing more damage to Bradley’s spine, the firefighters had to lift him out of the woods by hand, a manoeuvre which took more than two hours.

He was rushed to the major trauma unit at Farnborough Hospital where he spent four days recovering.

Doctors told him he was lucky that he didn’t need emergency surgery.

Simone has shared a scan photo showing a huge crack in her son’s skull to show the extent of the damage and warn other cyclists of the importance of wearing a helmet. 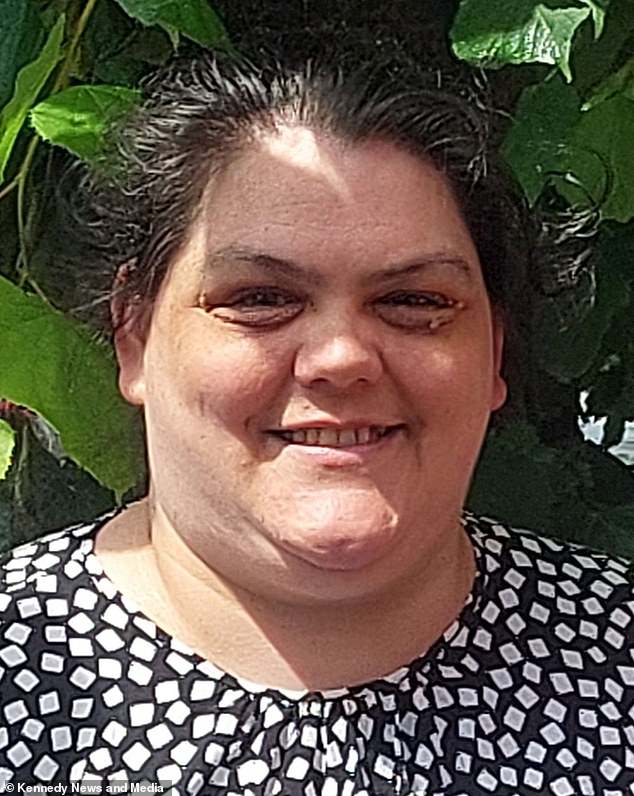 Simone, 40, said her sons had told her they would wear their helmets but left the house without them. She wants to encourage people to be more disciplined about wearing helmets while cycling 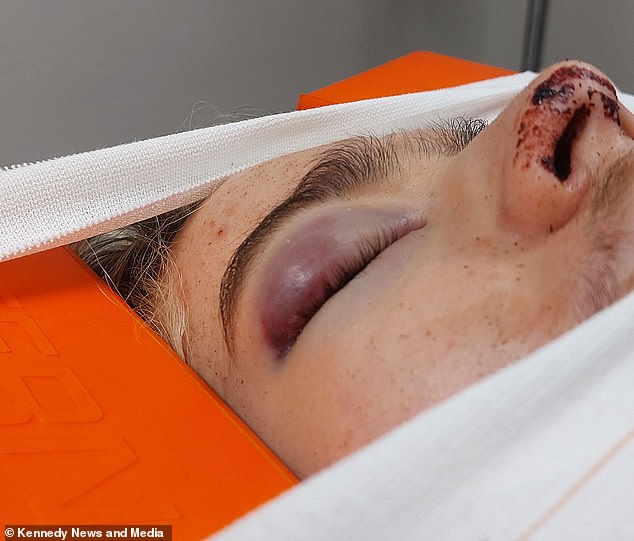 Due to his spine injury, firefighters had to carefully lift Bradley out of the woods, a manoeuvre that took more than two hours 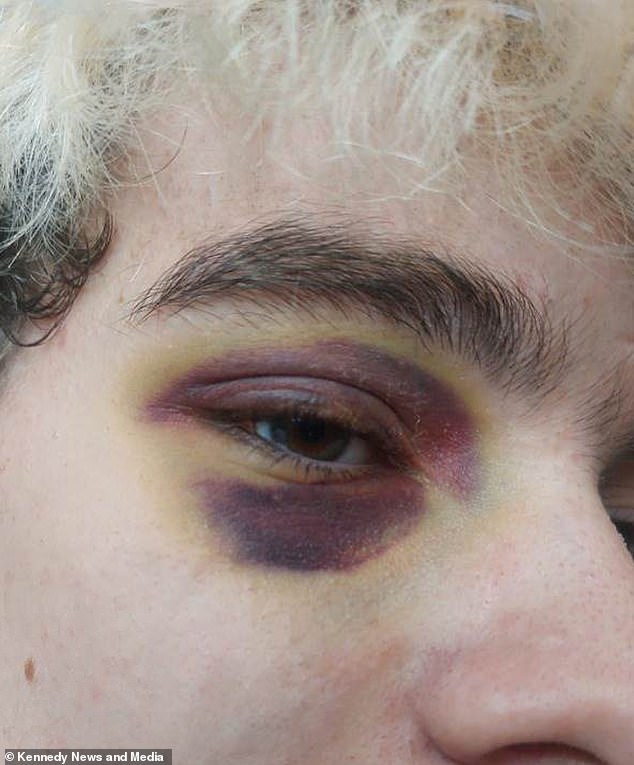 The chef was rushed to the major trauma unit at Farnborough Hospital. He sported an impressive black eye after the accident

Doctors told Bradley he was lucky that he didn’t need emergency surgery. The 17-year-old was stabilised by medics after younger brother Harrison called an ambulance

Bradley’s mother said: ‘He was on his way to work with his brother and a friend. I don’t let them go anywhere on their own so his brother and friend take him to work through the woods then come back together.

‘They wear their helmets until they are out of my sight and then it ends up on their handlebars apparently. They told me they were wearing them that day but they’d left them in their bedrooms.

‘He came out of a field, hit a tree root. He said his brakes failed but he was flying through the air which is why they weren’t working and he crashed into the tree.

‘He landed on top of his bike, the peddle was in his back, which is what fractured his spine. His nose was bleeding, he was being sick and he was laying on his side.

‘Bradley is one of those kids who would get up and carry on so when he didn’t get up Harrison knew something wasn’t right and called an ambulance.

Bradley spent four days recovering in hospital after the accident. He is on the way to making a full recovery but his mother has banned him from cycling until a follow-up scan in April 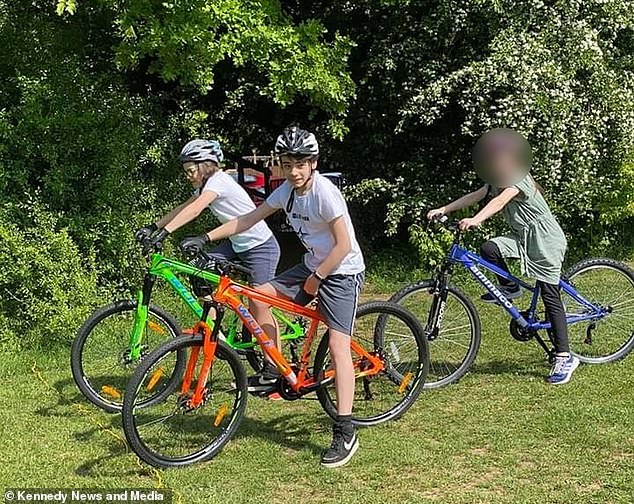 The bike that Bradley had been riding was written off in the accident. He had purchased it just weeks before

‘Harrison was a wreck. It proper scared him. He called an ambulance and two fire crews turned up.

‘It took them two and a half hours to get him to the ambulance because they couldn’t use a trolley with it being too bumpy and they didn’t want to damage his spine so they had to use a bucket board. It was a nightmare,’ Simone explained.

‘Harrison called me and said Bradley had hit a tree root, been thrown through the air and hit a tree then he put the phone down on me to call an ambulance.

‘No one will understand what was going through my head. I felt sick, I was shaking.

‘I didn’t see him for hours because they were stabilising him, scanning him and doing emergency assessments. It was horrible.

‘I saw him and thought he had a black eye and a bit of concussion but I heard the doctor talking about a fractured skull and I thought they must have mixed up the results. My heart sank.

‘I’m surprised at how lucky he’s been.’

Bradley’s bike, which he’d bought just a few weeks before for £70, was written off as scrap and he’s itching to get a new one. 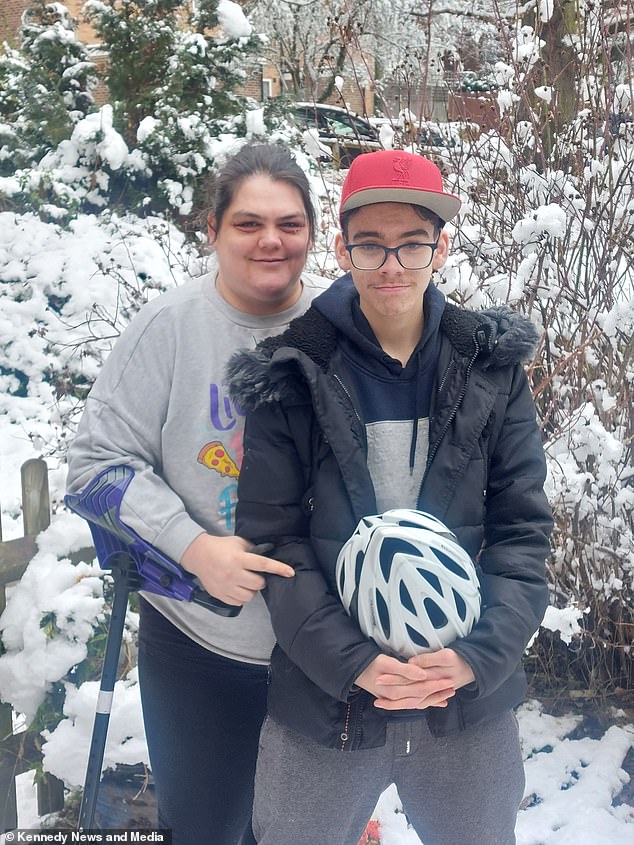 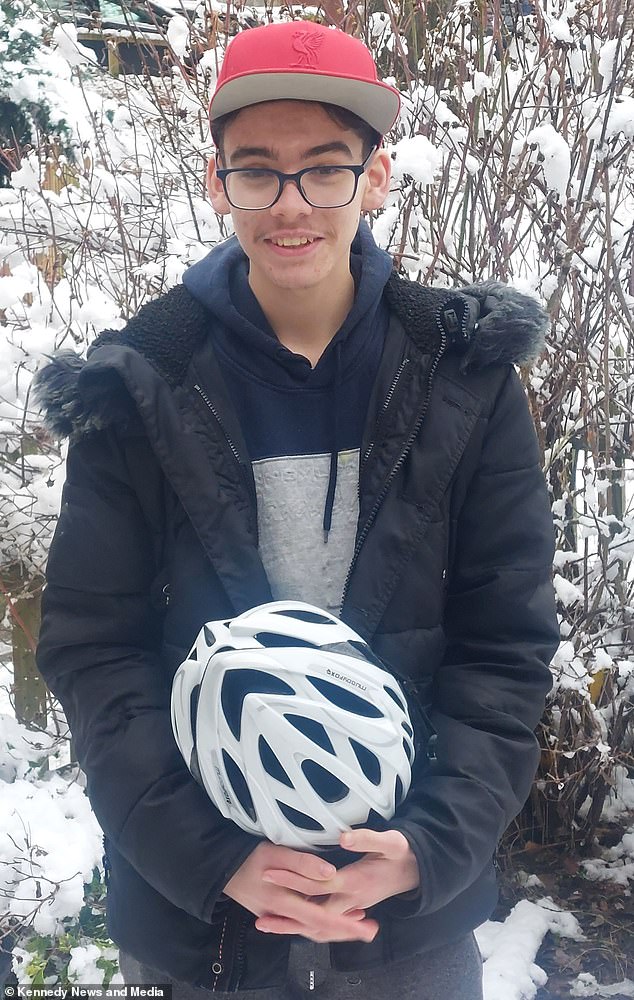 Mother-of-four Simone said she hoped the accident would scare her sons into wearing their helmets. She said she ‘couldn’t repeat’ what she’d said when she learned they had left the headgear at home on the day of the crash

But Simone has put a ban on any cycling until after April’s follow up scan to make sure his skull has healed.

The mother said she hopes the accident has scared Bradley and Harrison into wearing their helmets – as she has always told them to.

Simone said: ‘They told me they were going upstairs to get their helmets so I thought they had them but they left without them.

‘He tried telling me he was wearing his helmet but he’d fractured his skull so he obviously hadn’t. They then admitted they hadn’t been wearing them.

‘I can’t repeat what I said when they told me, I went crazy at them, I’ve told them so many times they need to wear a helmet.

‘When they were younger I made them wear them on their scooters and skates. I’m a safety freak. I’m surprised he’s not the same.

‘He’s promised me he’ll wear one and if I catch him without one I’ll take his bike to the scrap man.

‘I hope this has scared him enough to wear one. The doctors told him how silly he was and that he was very lucky to have those injuries without a helmet.

‘They’ve all been told off. No helmet, no wheels from now on. Even not moving on a bike, you can fall sideways, hit your head and not get back up. I want to get through to people that they need to wear a helmet.’