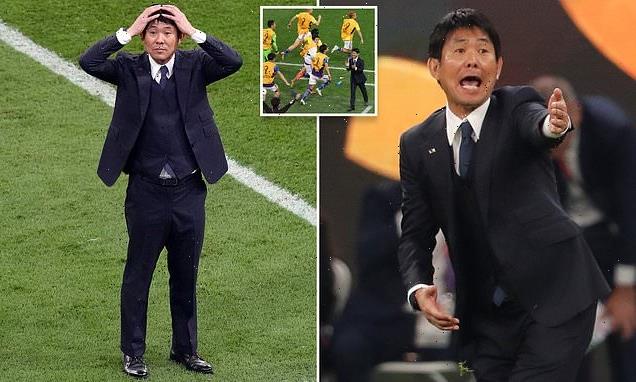 From agony to ecstasy! Mastermind of Japan’s win over Germany – known for his love of suits – played in his country’s infamous ‘Agony of Doha’ match…but now tastes victory in the same city

The mastermind behind Japan’s win over Germany has been on a storied journey, which climaxed on Wednesday with his team’s stunning World Cup victory.

Hajime Moriyasu, 54 – renowned for being one of the smartest men in world football and who always wears a suit on the touchline – had a point to prove in Doha.

The father of two sons, who themselves are international footballers, played in his country’s infamous ‘Agony of Doha’ match. It saw Japan lose to Iraq and fail to qualify for the 1994 World Cup, losing out to bitter rivals South Korea.

But he put that disappointment to bed today, leading his side to a unexpected 2-1 victory over four-time champions Germany – in the tournament’s second surprise result in as many days after Saudi Arabia beat Argentina on Tuesday. 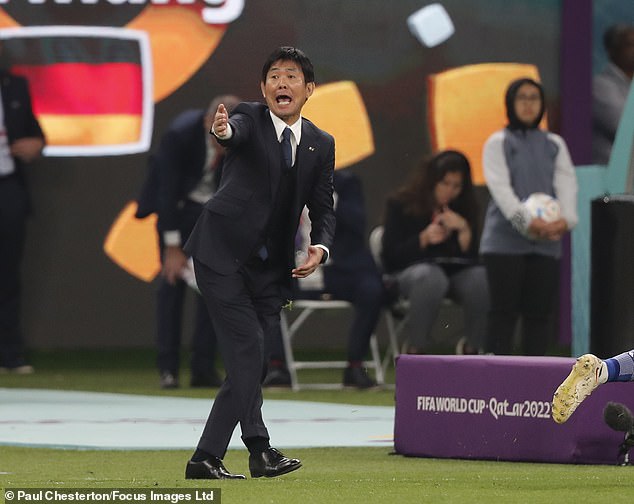 Pictured: Japan’s smartly-dressed coach Hajime Moriyasu, the mastermind behind his team’s surprise victory over Germany in Doha today – the same city in which he played in Japan’s infamous ‘Agony of Doha’ match in 1994, which saw them fail to qualify for the World Cup

Often seen prowling the touchline and barking orders to his players in his trademark dark suit, Moriyasu once had a trial at Manchester United at the start of his football career in 1990 when he was 22 years old.

But he failed to impress the then-manager Sir Alex Ferguson and his coaching staff, and Moriyasu was not offered a contract by the club.

Moriyasu returned to Japan where he spent 14 years with one club – Sanfrecce Hiroshima – and a short stint at another, before going into coaching.

The 2-1 victory in Doha will be all the sweeter for the 54-year-old as the city was the venue for one of the worst moments in his international playing career.

In 1994 he was part of the Japanese team when they took on Iraq in the final round of qualification for the World Cup.

Needing a victory to guarantee qualification for their first ever World Cup they, were held to a shock 2-2 draw with the Iraqi team scoring the equaliser in the last minutes of the match.

The result allowed bitter rivals South Korea to take their place at the tournament in America and the match, which featured Moriyasu in midfield, became known in Japan as the ‘Agony of Doha’.

But thoughts of that match were banished as the father of two celebrated with his players for the second shock result of the Qatar tournament, following Saudi Arabia’s 2-1 defeat of Argentina on Tuesday.

It was the first time Japan has ever beaten Germany. 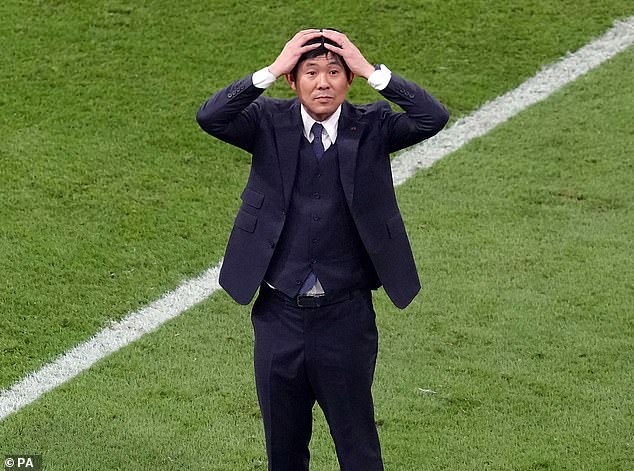 Sharply-dressed manager Hajime Moriyasu, 54, who was born in Nagasaki, is married with two sons who are both professional footballers. Pictured: Moriyasu puts his hands on his head in disbelief after his team triumphed 2-1 over Germany on Wednesday in Qatar 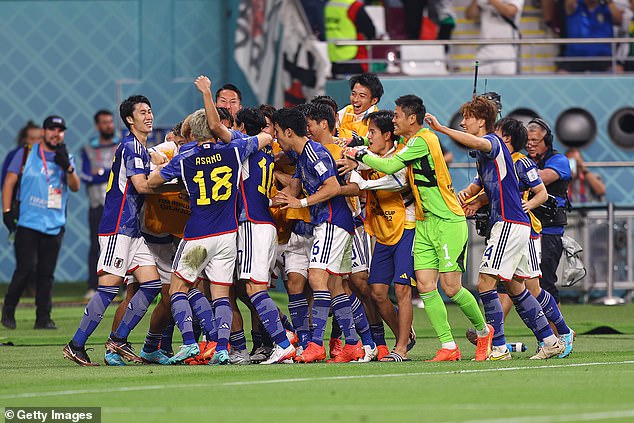 Pictured: Japan’s players celebrate wildly after their 2-1 victory over the four-time champions 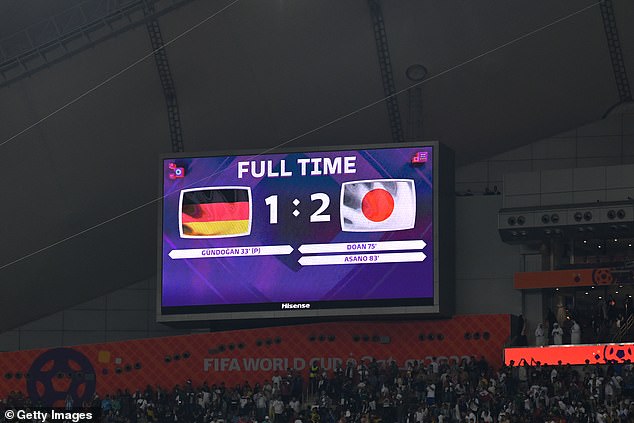 Pictured: The scoreboard inside the Khalifa International Stadium shows the final score

The two matches followed a similar pattern. Both Argentina and Germany took the lead through first-half penalties, before conceding two second-half goals to their underdog opponents. When the final whistles blew, chaotic celebrations followed.

With his team’s victory sealed, Moriyasu – with hands on his head – looked up into the stands of the Khalifa International Stadium in disbelief at their achievement.

Moriyasu had first showed his promise while playing as a midfielder for Nagasaki Nihon University High School.

He spent most of his playing career with Sanfrecce Hiroshima where he made 271 appearances, and later became a youth coach with the club.

He managed Japan’s youth sides to the 2006 AFC Youth Championship and 2007 Under-20 World Cup and later took charge of Japan’s Under-23 side for the lead-up to their home Olympics in Tokyo in 2020.

He was an assistant to the national team boss Akira Nishino at the 2018 World Cup in Russia, where Japan were knocked out by Belgium in the last 16 in devastating fashion. Japan had been 2-0 up, but Belgium scored two to bring it level.

A lighting-quick counter attack saw Belgium score their third in the 94th minute, winning the game 3-2 and breaking Japanese hearts. 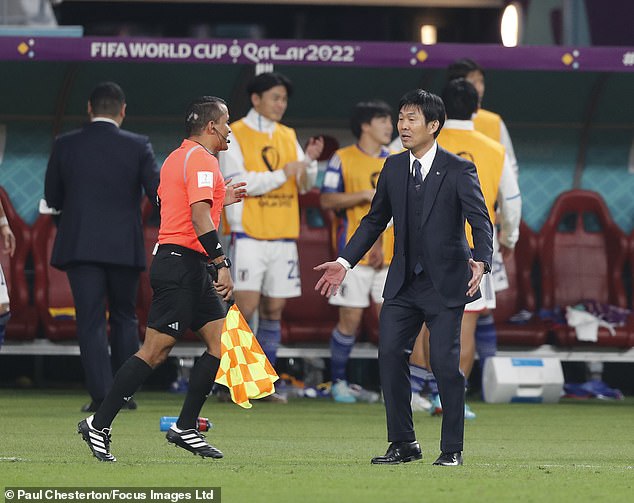 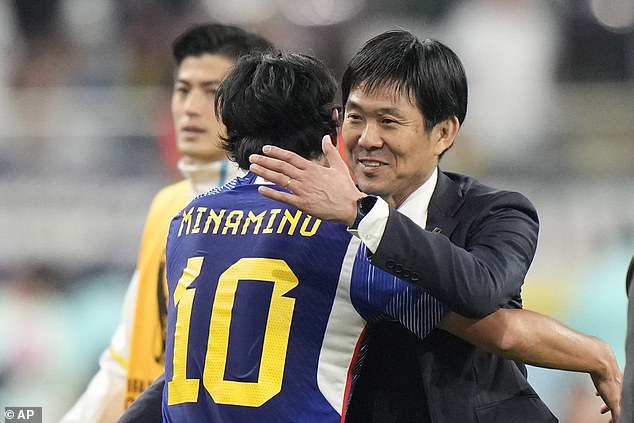 After the tournament, Moriyasu was promoted to national team manager for the 2019 Asian Cup and 2020 Olympics.

He steered the team through the qualification rounds where they finished second to Saudi Arabia in their group.

Both his sons played professional football.

‘I believe it’s a historic moment, a historic victory,’ Moriyasu said after the match on Wednesday. ‘If I think about the development of Japanese soccer, thinking of players, for them this was a big surprise.’

Moriyasu had five Germany-based players in his starting lineup and three, including the scorers, on the bench.

‘They’re fighting in a very strong, tough, prestigious league. They’ve been building up their strength. In that context we believe that those divisions (Bundesliga and second division) have been contributing to the development of Japanese players.’

With his team off to a flying start at the 2022 World Cup, it remains to be seen how deep Moriyasu will take Japan into the tournament.

Japan has reached the last-16 on three occasions – in 2002 (when Japan joint-hosted the tournament with South Korea), in 2010 and at the last World Cup, in 2018. If he can go a step further, Moriyasu will go down in Japanese football’s history books. 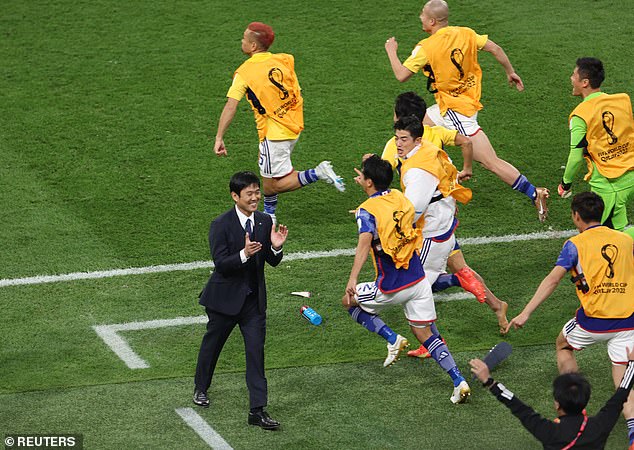