CSI past: Grisly photos of vintage New York murder scenes show bodies crammed in suitcases and sprawled across barbershop floors as cops in trilbies and crowds look on – without any hi-tech forensics in sight

Victims stuffed in suitcases, mobsters taken out mid card-game and bloodied bodies surrounded by crowds of detectives in trench coats and trilbies without any thought for crime scene contamination: This is the history of murder investigation in New York City.

A series of vintage crime scene photos from the Bettmann Archive offer a fascinating glimpse into the changing world of policing in the Big Apple and a grisly insight to some of the most notorious killings in the city in the first half of the twentieth century.

One image shows detectives gathered around a body folded into a suitcase in 1957. One officer in a suit handles the case without gloves while another in short sleeves casually lifts out torn newspaper that has been stuffed around the corpse. 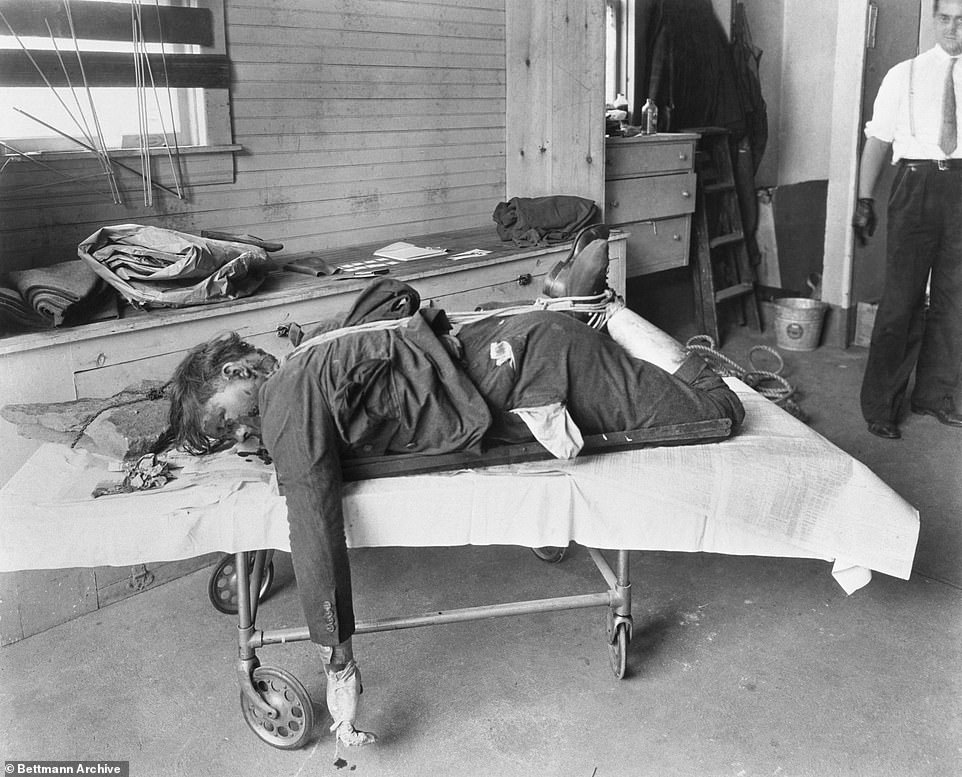 Mob victim: The body of Walter Sage, a hitman working for the mob gang Murder Inc, is pictured after his bound body was pulled from Swan Lake in the Catskills. He was allegedly killed for skimming cash from the mob’s slot machine profits 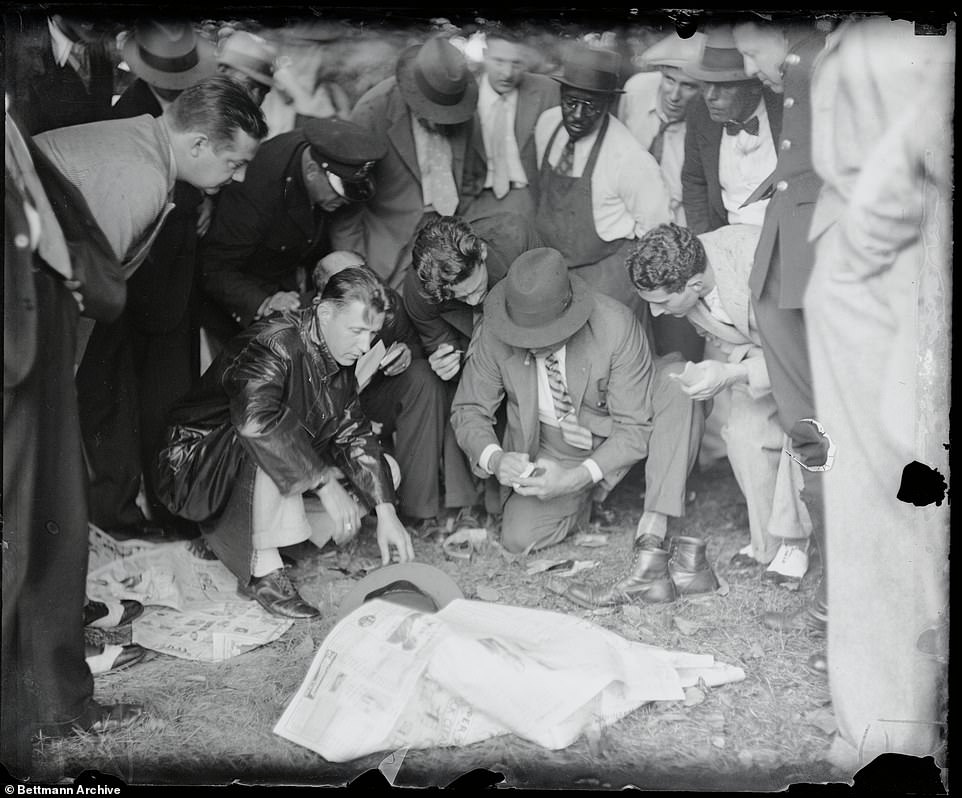 No CSI:  Crowds are permitted to gather round detectives in this shot from Washington D.C. where Long Island man Thomas N.Innes was found bound and gagged at the bottom of the tidal basin. Investigating officers sift through his belongings without gloves as curious spectators peer over them 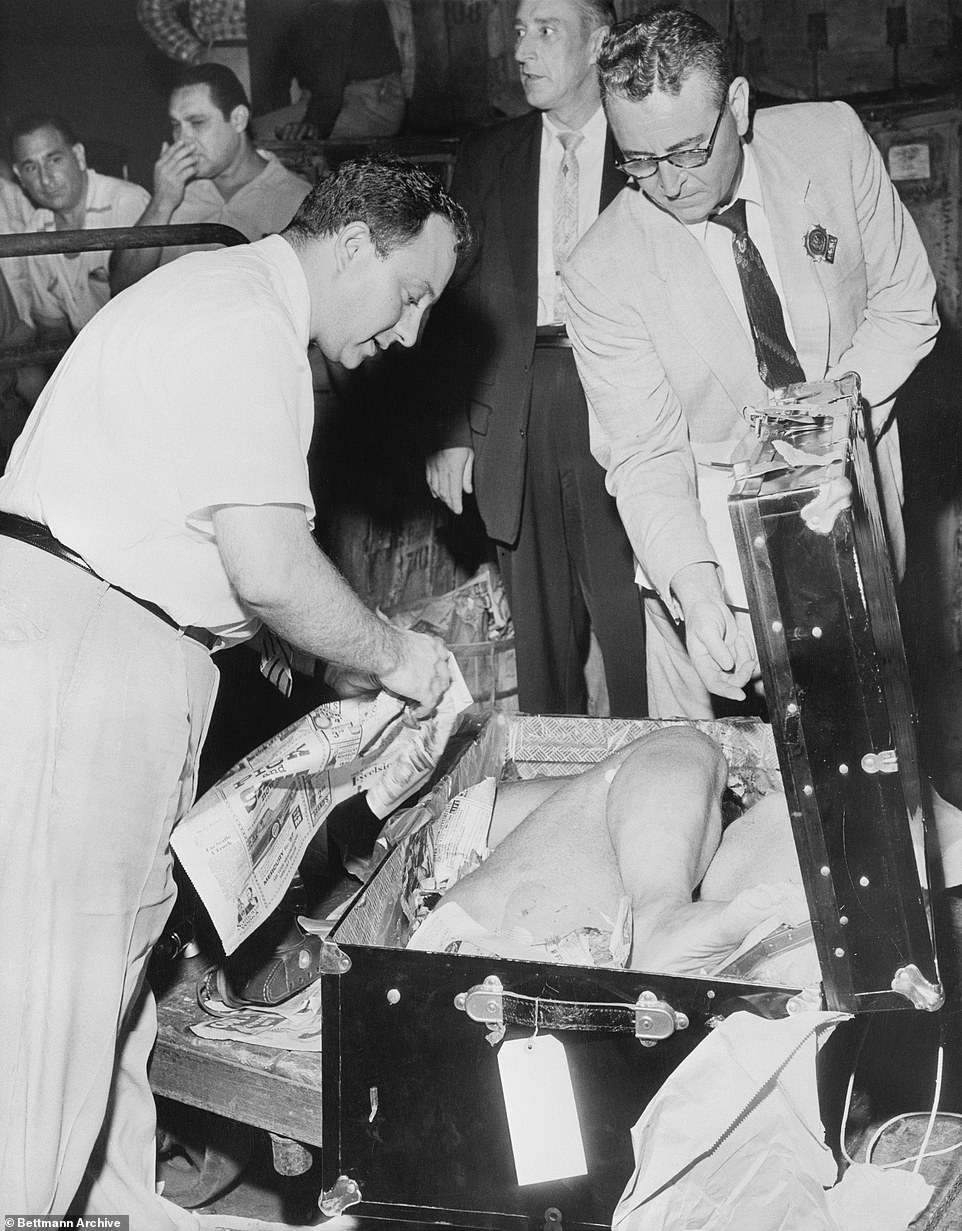 Suitcase killing: This eerie shot shows detectives examining a body in a suitcase. Officers are not even wearing gloves as they handle the evidence

A gathering of men nearby look on, seemingly unperturbed by the scene.

It’s hard to believe such little thought was given to crime scene investigation so recently but delving back further through the archives it reveals how little was known or care was given to forensics.

A 1932 photo shows a huge gathering around the bound and gagged body of Long Island man Thomas N. Innes in Washington D.C. Onlookers are free to move close and peer with ghoulish delight as police examine the corpse and belongings discovered at the bottom of the tidal basin.

No probe of New York’s criminal history would be complete without touching on the many murders of mobsters that have taken place across the city.

One startling shot shows the covered body of one of the most ruthless figures in organised crime in America, Albert Anastasia. 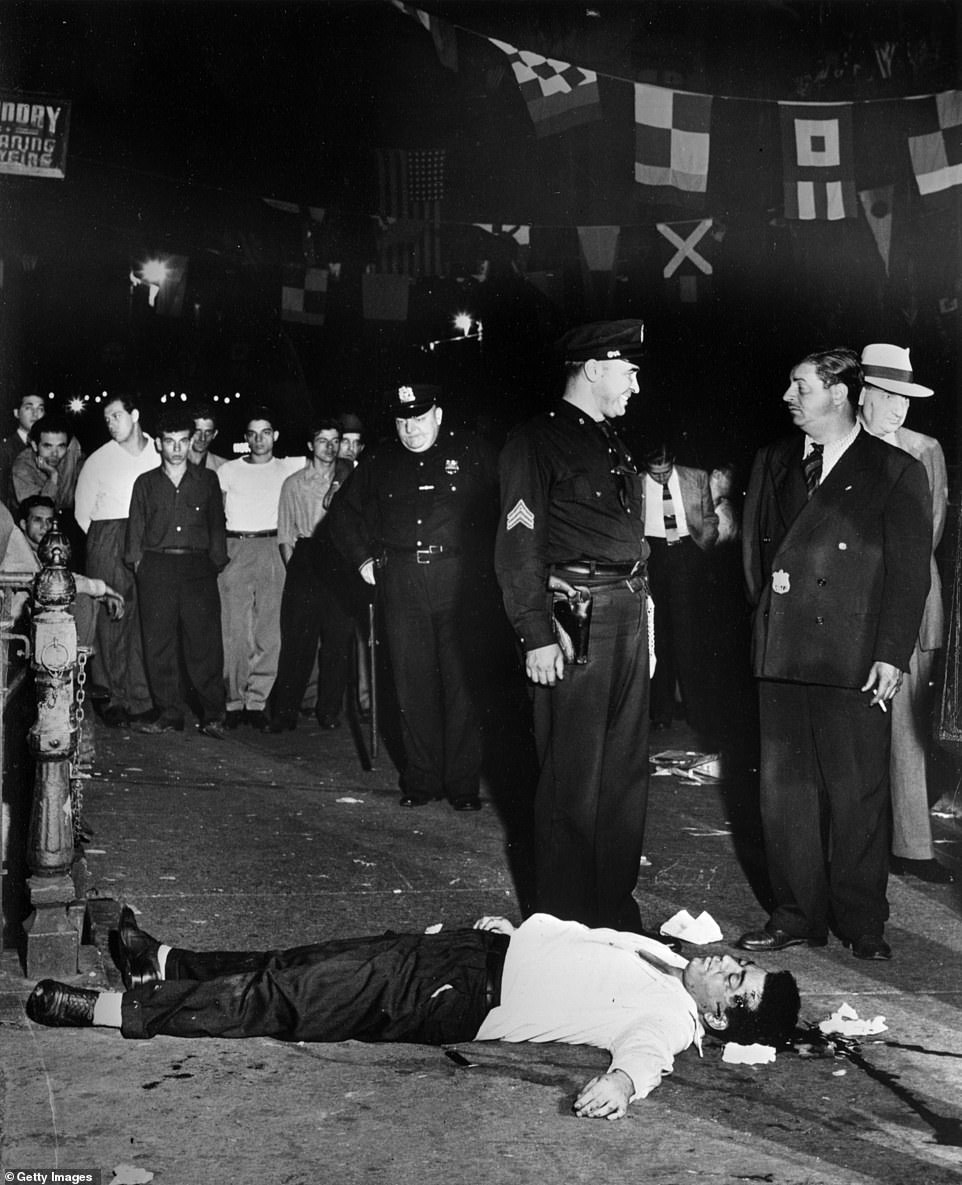 San Gennaro slaughter: This photo shows the scene of the murder of two men at the feast of San Gennaro in 1939. Joseph ‘Little Joe’ La Cava and Rocco ‘Chickee’ Fagio were both found dead on Mulberry Street 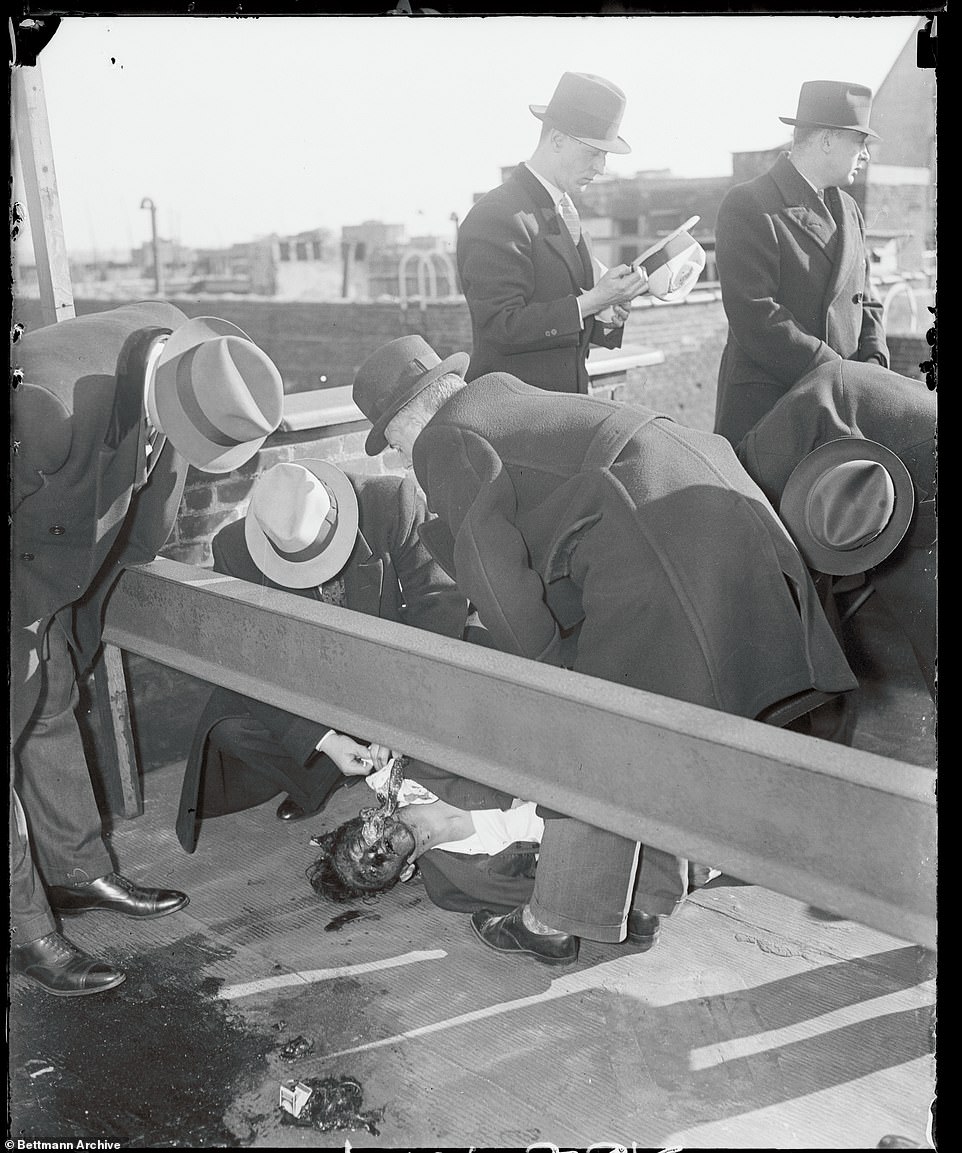 Homicide squad: A group of detectives is photographed examining an unidentified body in New York City in 1935 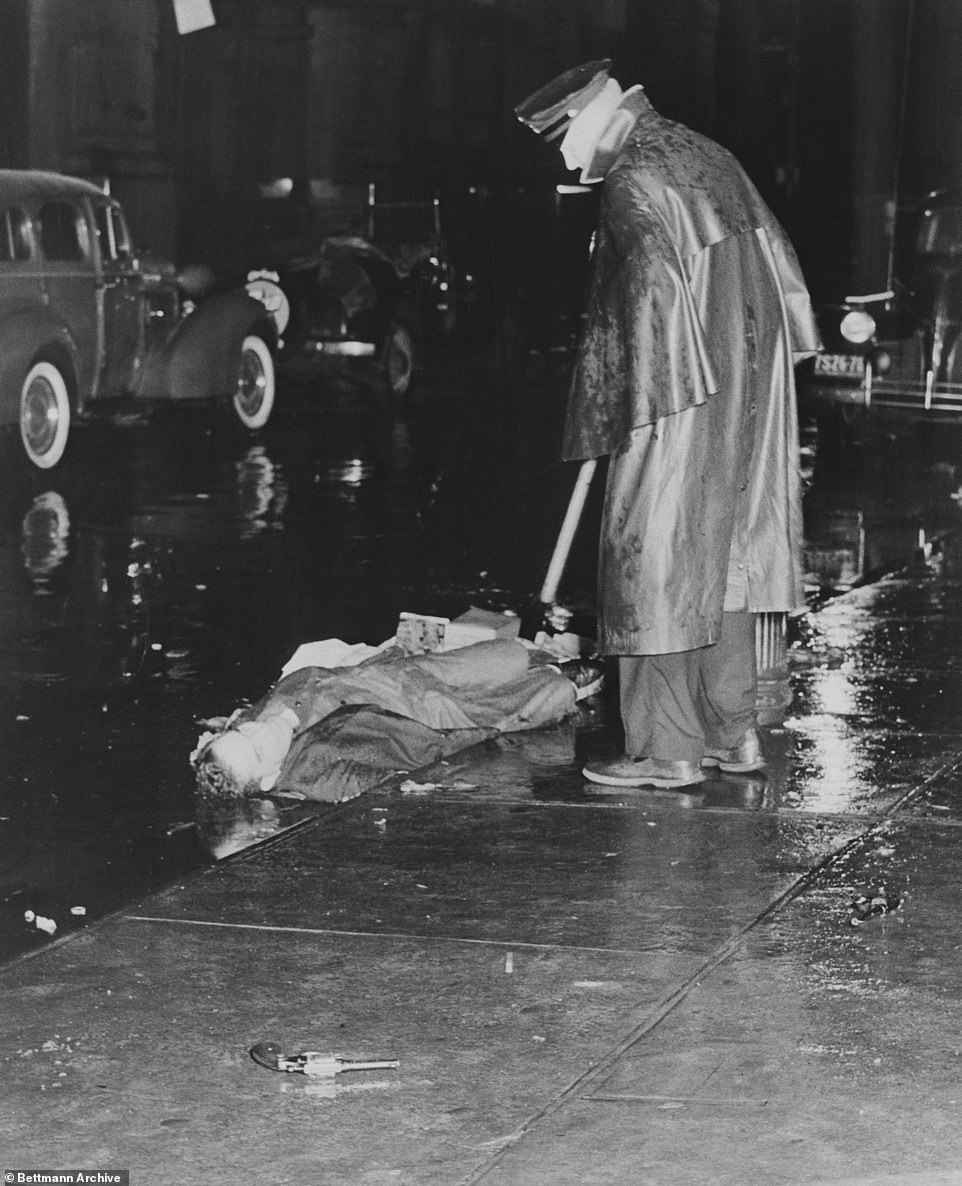 Patrol find: A policeman looks at the body of Louis Riggiona, found dead in the gutter of Mulberry Street with two bullets in his heart and the two murder weapons abandoned nearby 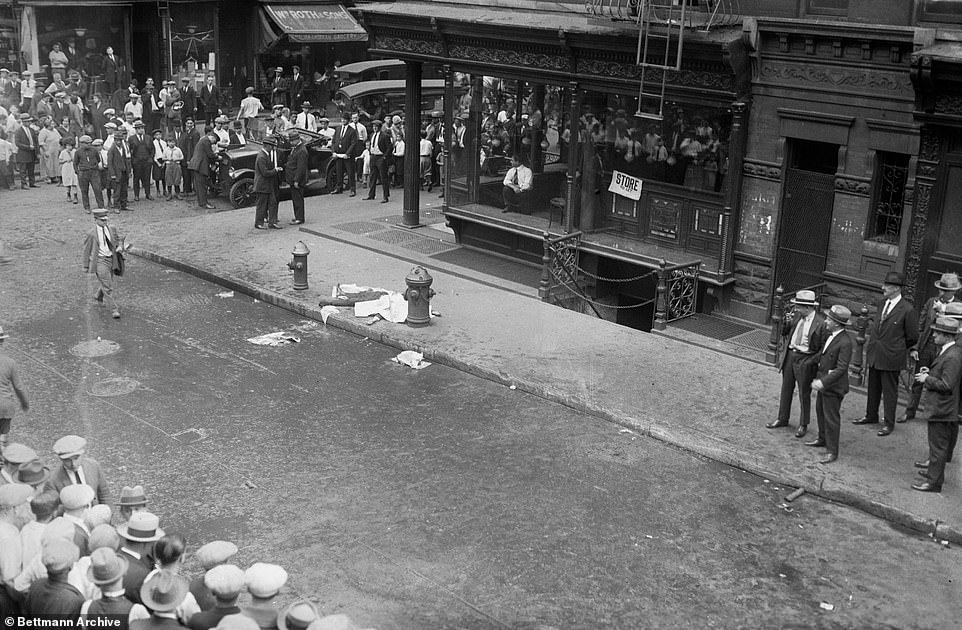 Mott Street murder: Crowds are pictured around the body of a man dumped on New York sidewalk 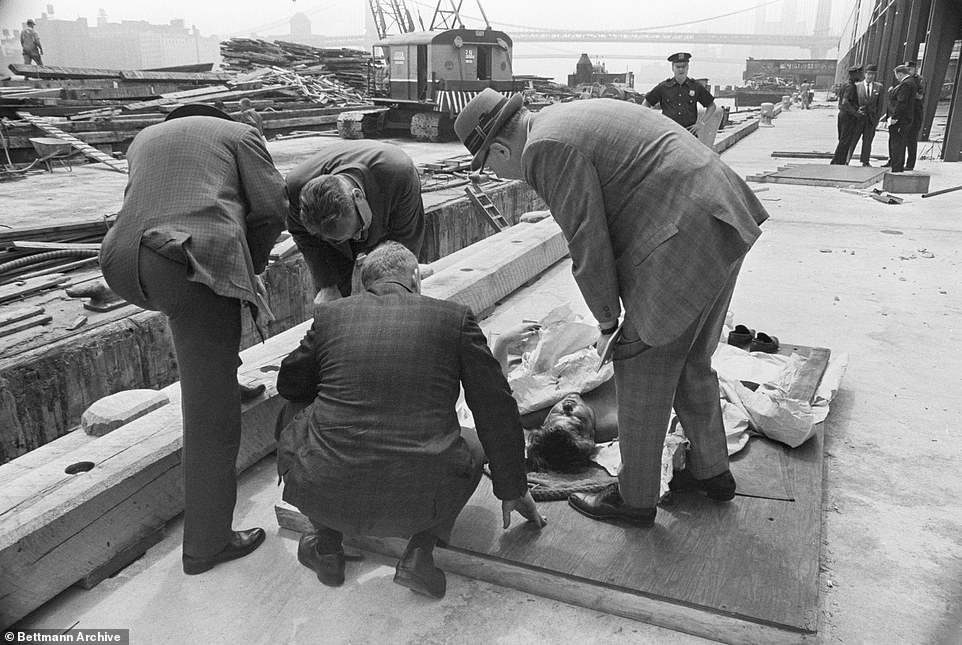 A medical examiner is pictured peering over the body of a man found floating in the East River in 1963. Bullet holes were found in the man’s head 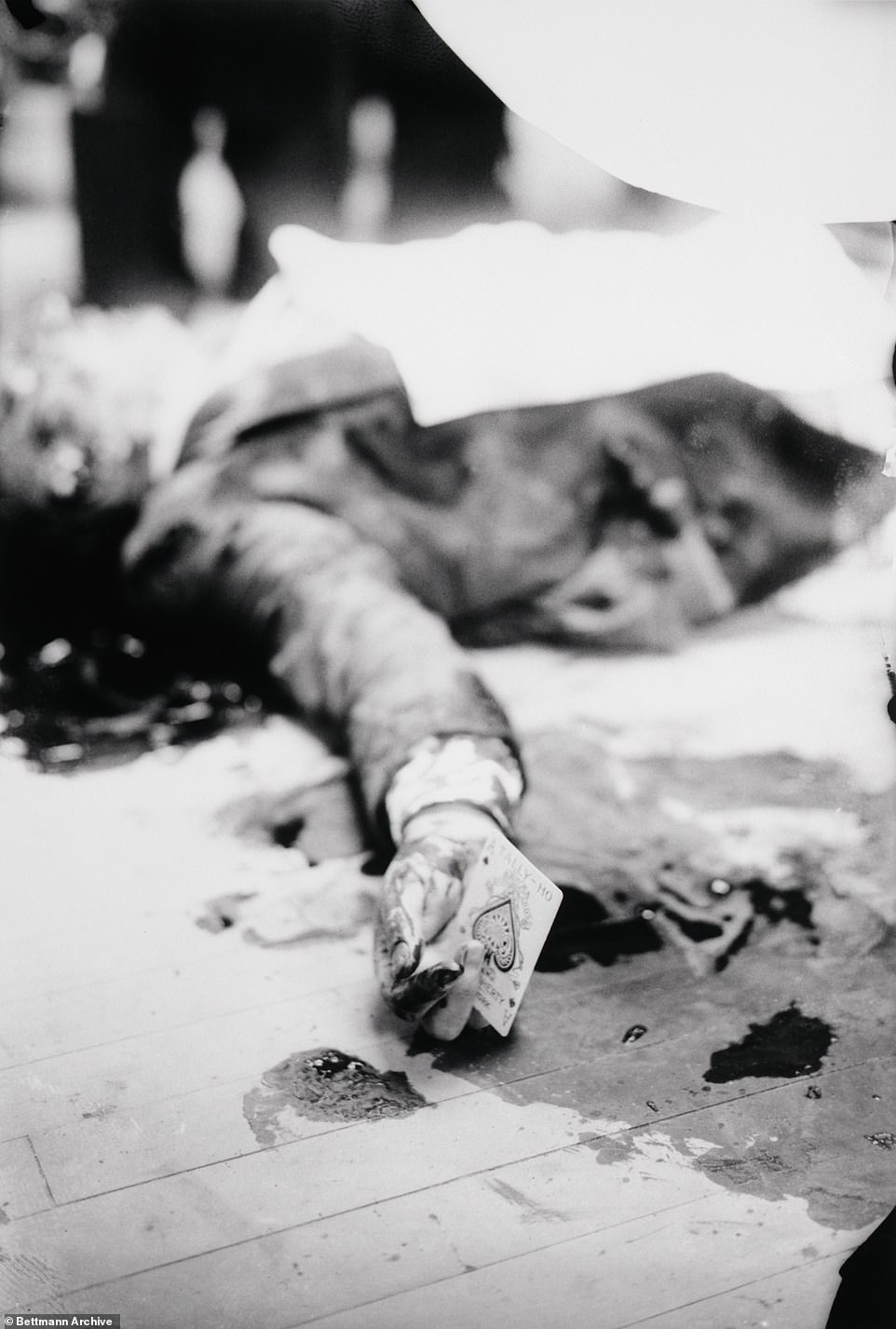 This photo shows the body of underworld kingpin Joe “The Boss” Masseria. He holds a playing card in his hand, as he was murdered while playing pinochle in a restaurant

Anastasia was considered the “Lord High Executioner” of Brooklyn’s infamous Murder Incorporated gang. Until he was himself executed in the barber shop of the Park Sheraton hotel, he was one of the deadliest criminals of all time – slaughtering thousands.

The photo of his corpse lying covered in sheets on the floor of the barbershop became famous but none was ever charged. 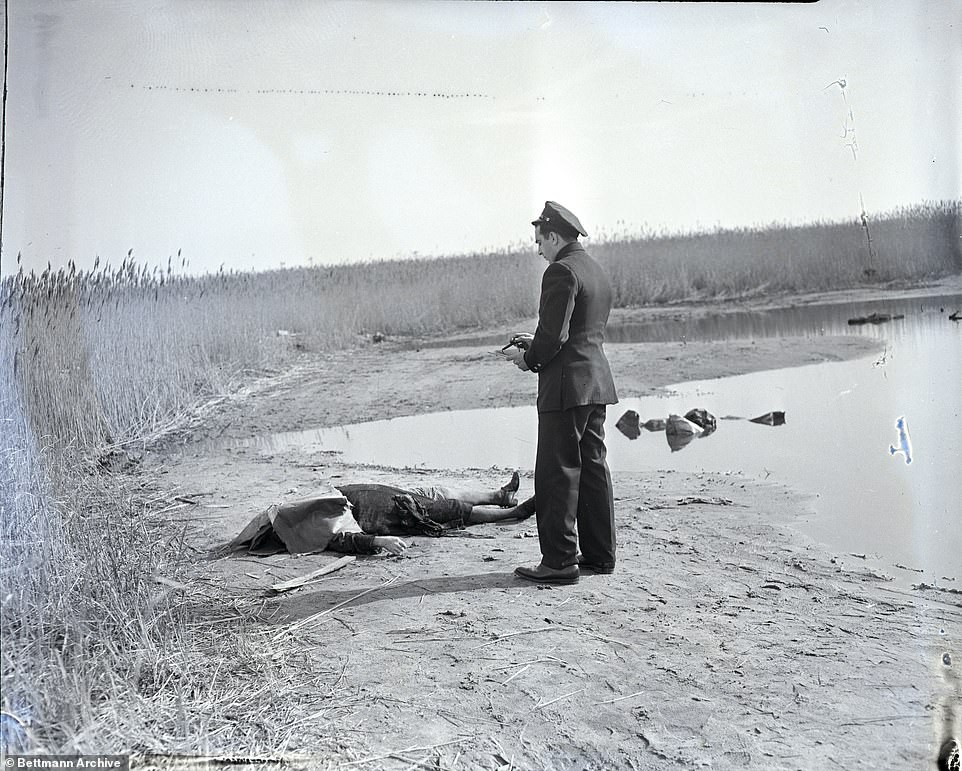 Brooklyn homicide: A woman’s body is found washed up on marshes in Brooklyn in 1947 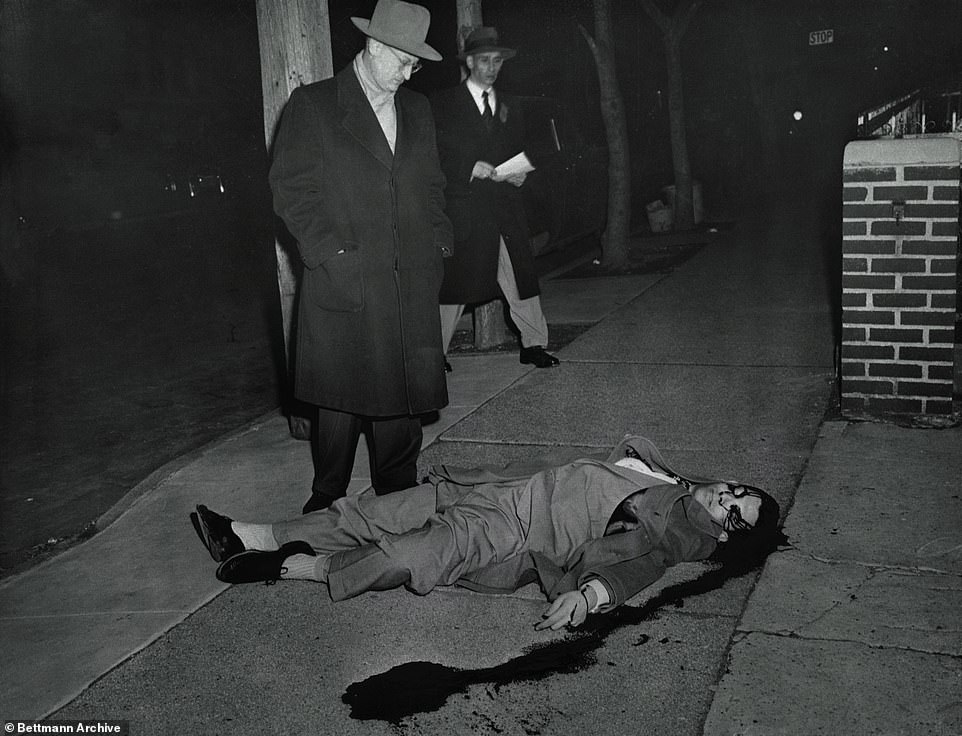 Death if a salesman: This 1952 photo shows the Assistant DA examining the body of Arnold Schuster, 24, – a Brooklyn pants salesman – who had tipped off police  on the whereabouts of American robber Willie Sutton after spotting him on a subway train following the criminal’s daring jail escape 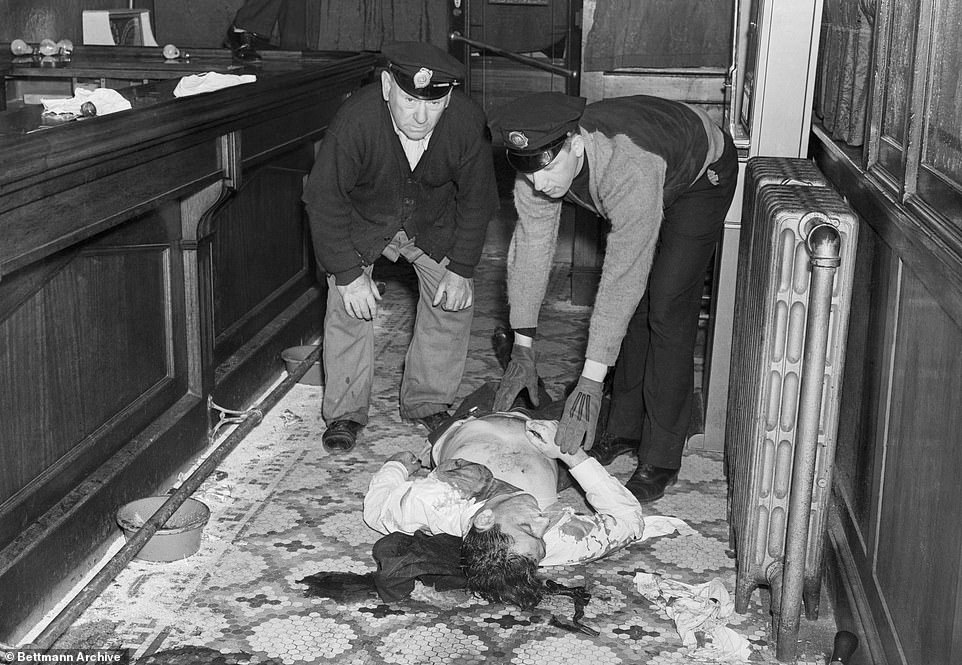 Barstool brawl: Louis Lombardy was shot dead as he drank beer in a bar on Third Avenue 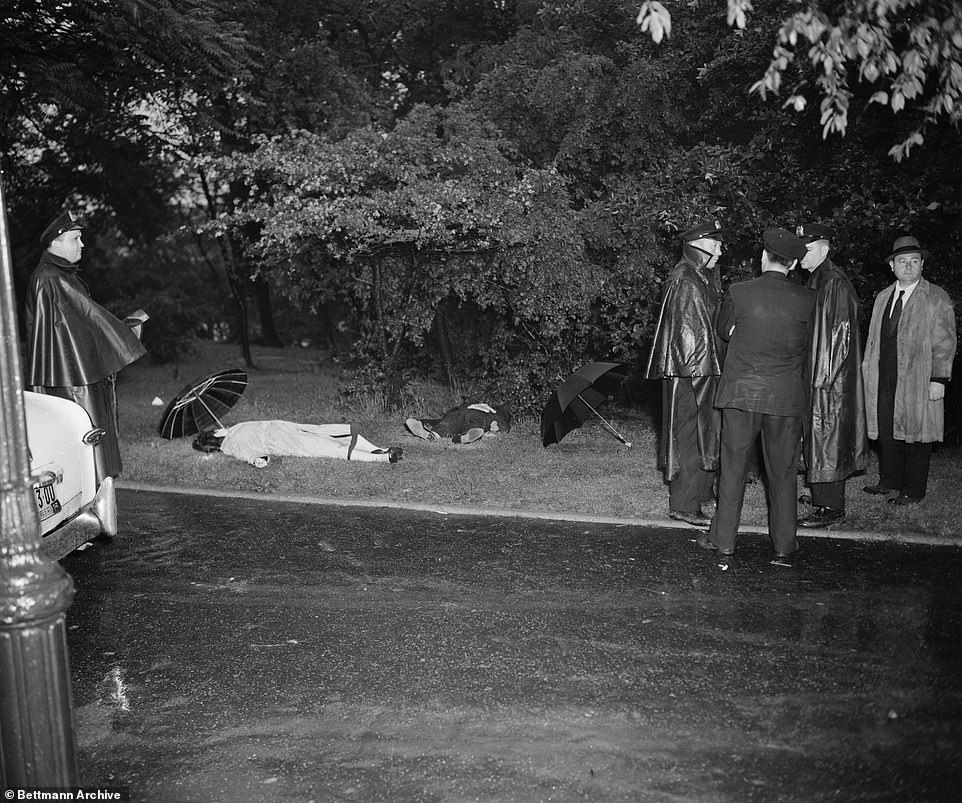 This scene shows a double murder in Central Park at 106th Street East. A forty-five caliber pistol was found nearby 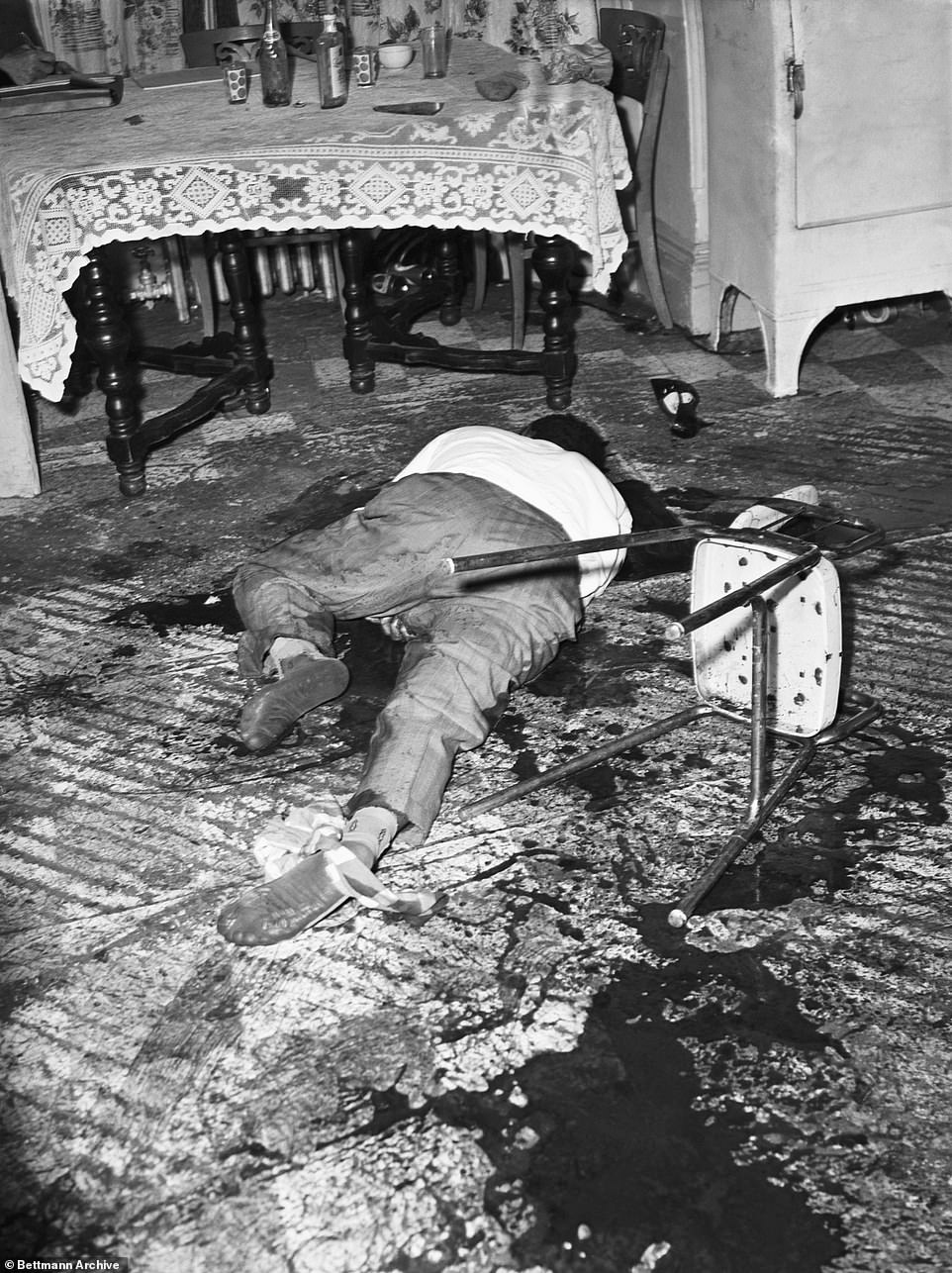 This Bronx killing took place in 1962. The shoeless victim was found covered in blood sprawled across a living room floor after being shot in his chair

Another photo shows a crime scene at the center of Little Italy in 1939. ‘Little Joe’ Joseph La Cava and Rocco ‘Chickee’ Fagio were slaughtered in the double murder on Mulberry street.

Joe was the boss of the what is now known as the Genovese crime family.

He was mown down in 1931 while playing pinochle in a restaurant. It is believed the hit was ordered by his own lieutenant Charles Luciano. 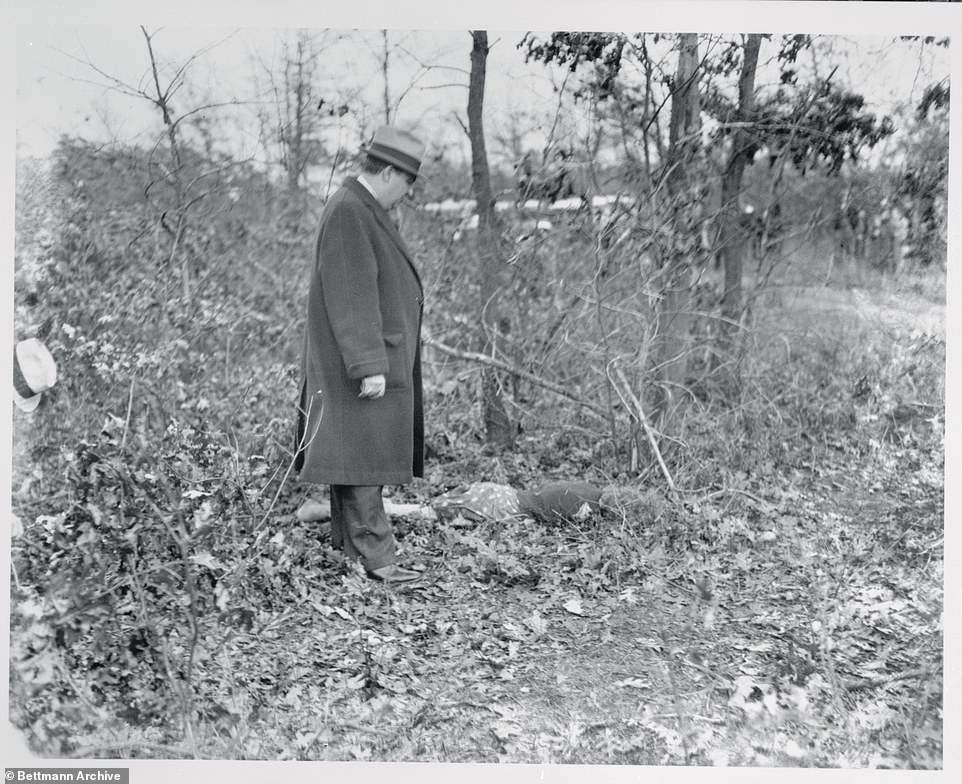 Tragic Ellen: This sad photo shows police guarding the body of 15-year-old schoolgirl Ellen O’Connor who disappeared from her home before being found murdered and dumped in Massapequa woods 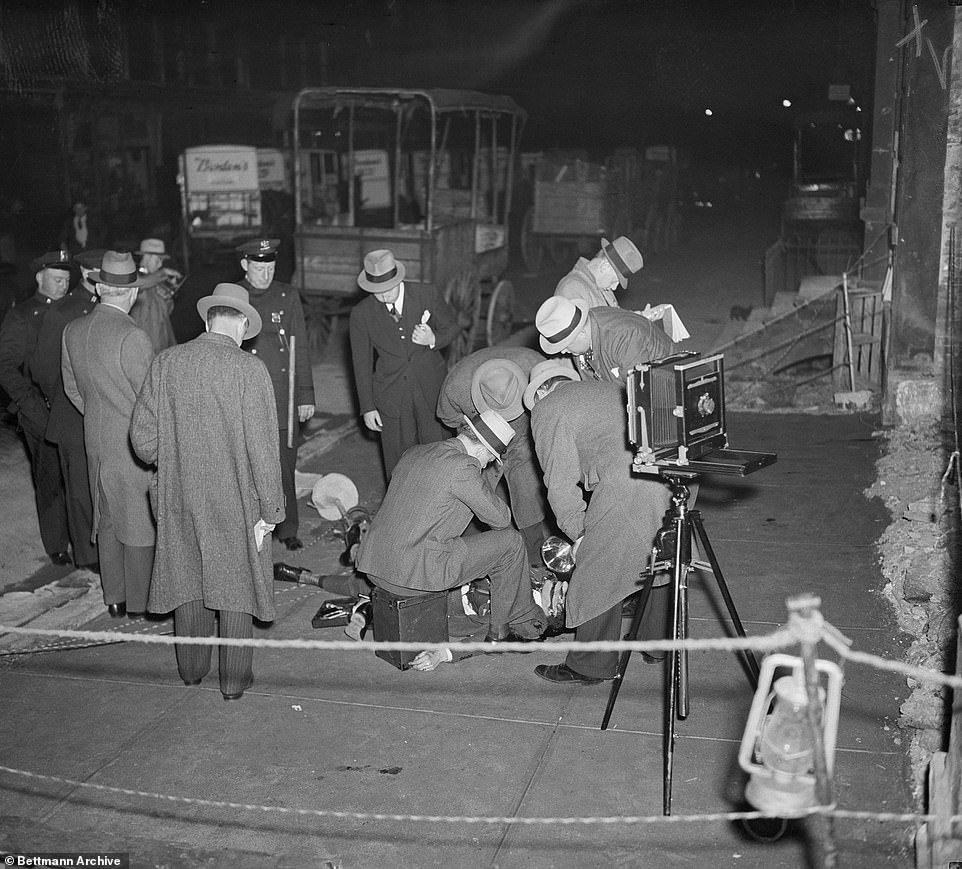 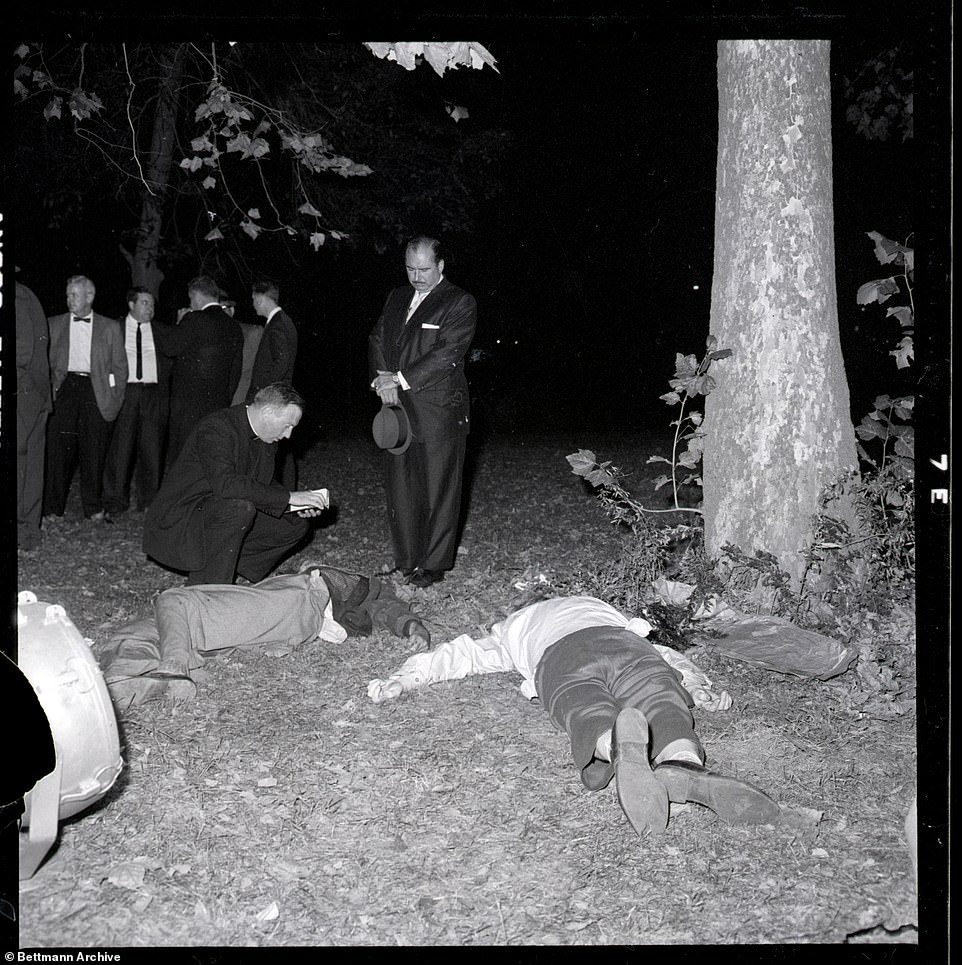 Last rites: A priest is pictured attending the bodies of Thomas J Hogan and Fred Romer in 1961. Hogan shot dead Romer before turning the gun on himself 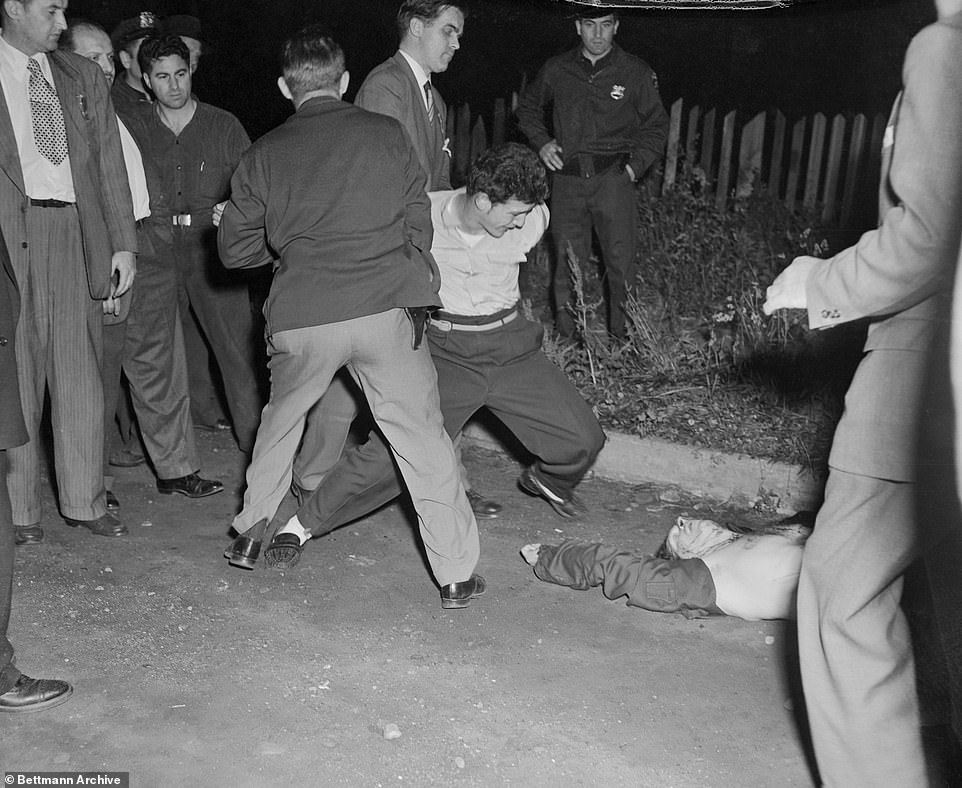 Heartbreak: A brother’s raw emotion after identifying his sibling’s body is captured in this photo. Vincent Emmino, 18, is pictured moments after discovering the body of his older brother and serial robber Ralph “Buck” Emmino. The younger Emmino swore vengeance when he saw his brother’s corpse.