A defrocked Greek Orthodox priest was charged Thursday with multiple counts of causing grievous bodily harm over an acid attack that injured seven senior bishops and three other people.

The 37-year-old Greek man was led to court in lay clothing, handcuffs, and under a heavily armed police escort.

He was arrested by a police guard late Wednesday after he allegedly threw acid at the bishops following their announcement, at a disciplinary hearing, that he had been formally removed from the clergy for alleged misconduct. 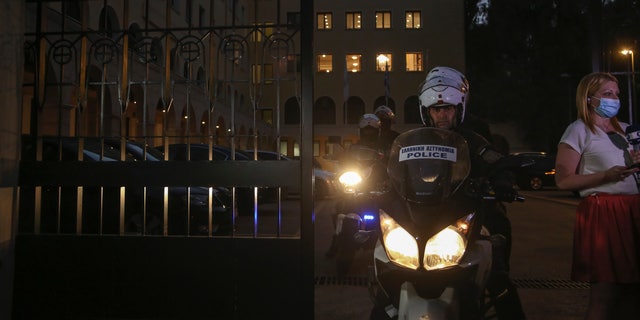 A police officer on a motorcycle exits the Petraki Monastery in Athens, following an attack with a caustic liquid on Wednesday, June 23, 2021. (AP Photo/Petros Giannakouris)

Photographs of the scene of the attack in central Athens, shown on state ERT TV, showed bloodstains and acid burns on the walls of the room where the hearing was held and on small desks where the bishops had been seated.

Discarded black robes thrown off by the bishops and attending clergy also had bloodstains and burn holes.

The governing Holy Synod of the Orthodox Church described the attack as “abhorrent and unprecedented,” confirming that the suspect had been removed from the priesthood after holding the lower rank of deacon.

Church officials said he was removed for “ecclesiastical and criminal offenses” including fraud and illegal possession of drugs, adding that he had made threatening posts on social media ahead of Wednesday’s hearing.

The attack was also condemned by Greece’s government, President Katerina Sakellaropoulou, and the spiritual leader of the world’s Orthodox Christians, Ecumenical Patriarch Bartholomew I who is based in Istanbul, Turkey.

Police have not said what caustic substance was used in the attack but the suspect’s lawyer described it as acid when talking to reporters outside a courthouse where the charges were being prepared.

“The suspect … is a psychiatric patient who is taking strong medication,” his lawyer Andreas Theodoropoulos said. “He did not fully comprehend the consequences of his action … but was responding to a perceived injustice.”