From the pane of separation to the cuddle of a lifetime: Two great-grandparents gazing at their family through the glass in a photo cited by Kate Middleton are reunited four months (and one cancer battle) later

One thing is certain: children, even the youngest ones, do not forget how to hug.

Florence and Edith Johnson, who are four and two respectively, run across the lawn and hurl themselves at Great-Nanna Theresa and Great-Grandad Ray.

Both little girls are swept into the air. Great-Nanna — who is recovering from a cancer operation — can’t manage to swing her precious bundle as high, but no matter. The effort is valiant. Four little feet dangle as heads are buried in necks.

There are tears all round, of course. This moment has been a long time coming. Over four months, if we are counting, which we all have been. 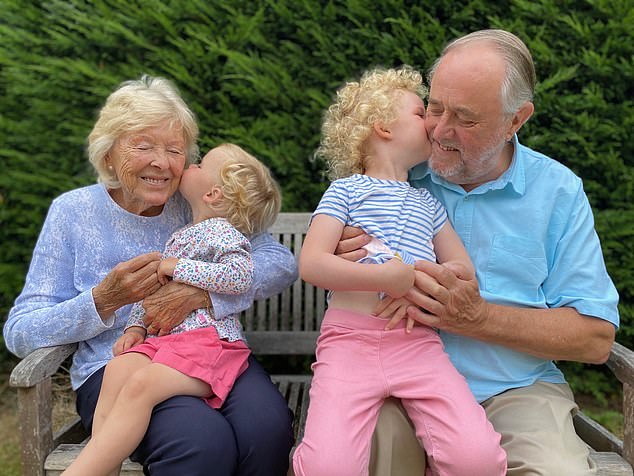 Sealed with a kiss: The family are reunited after four months apart. Florence and Edith Johnson, who are four and two respectively, run across the lawn and hurl themselves at Great-Nanna Theresa and Great-Grandad Ray

Meet the Cossey family, reunited at last. This remarkable (‘yet quite ordinary, really,’ says patriarch Ray) family have pretty much defined this extraordinary chapter in our national history.

Photos of Florence and Edith socially distancing from their great-grandparents in the early stages of the Covid crisis were seen by thousands, as Britain closed down and families all over the country — even ones like this, who thought they were inseparable — were parted.

One image in particular summed up our collective plight. It showed the sisters’ little hands pressed up against the glass patio doors of Ray and Theresa’s Norwich home. The couple, both 81, were cocooned on the other side, but returned the gesture.

Florence and Edith’s mum Vickie, 30, snapped the images on her phone on a Tuesday in mid-March, when she insisted on taking them to play in their great-grandparents’ garden, even if all physical contact was banned.

Normally on their weekly visits, they would all troop indoors for juice and cake. On that day, the girls played outside and drew pictures of the sun (to cheer Great-Nanna up) with chalk on the patio.

Ray and Theresa, still in their dressing gowns, pressed their fingers to the glass and blew kisses, just delighted to see them at all. The resulting ‘pane of separation’ shot, now famous, broke hearts.

Among those moved by it was the Duchess of Cambridge who, weeks later, cited the image as the inspiration for the launch of her nationwide Hold Still photographic competition, devised in conjunction with the National Portrait Gallery, with the aim of reflecting the nation’s pandemic experience.

She used the Cossey family picture to highlight the sort of image she felt represented our ‘new normal’.

‘There are some desperately sad stories out there, but moments like this are really heart-warming to see and that actually there is connection there. It is different, it’s the new normal for all of us. But those moments can take place and it really resonated with me,’ she explained. 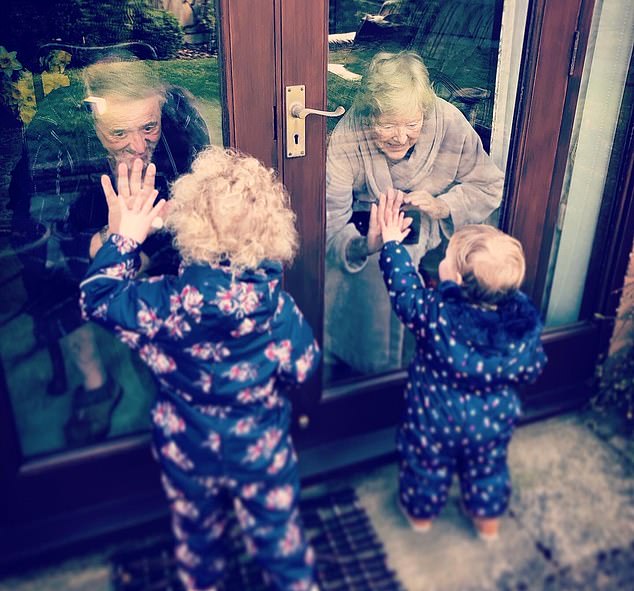 Ray and Theresa, still in their dressing gowns, pressed their fingers to the glass and blew kisses, just delighted to see them at all. The resulting ‘pane of separation’ shot, now famous, broke hearts

The Cosseys were rather gobsmacked to have the photo used thus. It is still the main image on the Hold Still website.

‘And we are still waiting for the royalties,’ jokes Ray, who is a former commercial director of Norwich City FC.

His pride is unmistakable, though. ‘It was a defining image, and I’m chuffed it was used,’ he says.

‘It just summed up so much. At the time we did not know how long we would be apart for. We had no idea what was in store.’

Vickie is also understandably chuffed. ‘When the Duchess singled out our picture, it was astonishing, really. I like to think it just spoke to her, as a mother. Although the photograph went viral, a lot of our friends didn’t realise it was of our family until later. The girls’ faces weren’t in it, and several times that picture has come up in conversation and I’ve had to say ‘that was us’!’

It will most definitely be an image that the girls themselves will treasure, she hopes. ‘It’s their place in the history books, in a small way,’ she says.

‘They will be able to look back and say ‘we were there and this momentous thing happened, and this is how my family got through it.’

‘At the minute they are too young to understand. They know that they couldn’t go to nursery or see their friends because we had to help all the doctors and nurses, and they couldn’t see Nanna and Grandad because of the germs, but in time they will know the full story. This will hopefully help explain it all.’

How joyful to now have the follow-up snaps — with smiles galore — to document the return of normal family life (or at least a version of it) too. This particular family reunion has been longer in coming than most. Theresa and Ray, who have two children, six grandchildren and eight great-grandchildren, went into isolation early in the pandemic because Theresa had been receiving treatment for breast cancer. Cruelly, she has spent much of her life working for a breast cancer charity, and received an MBE for it.

She had a second lumpectomy the week before lockdown, so was particularly vulnerable. She also has Parkinson’s disease. Then, just at the time other families were being allowed to form small ‘bubbles’ and contact between households was permitted, the doctors said there were still cancer cells in evidence so Theresa should consider a mastectomy. She immediately said yes. ‘It was an easy decision,’ she says.

‘I am 81 so it’s not as if I will be having more babies or entering any beauty contests.’ 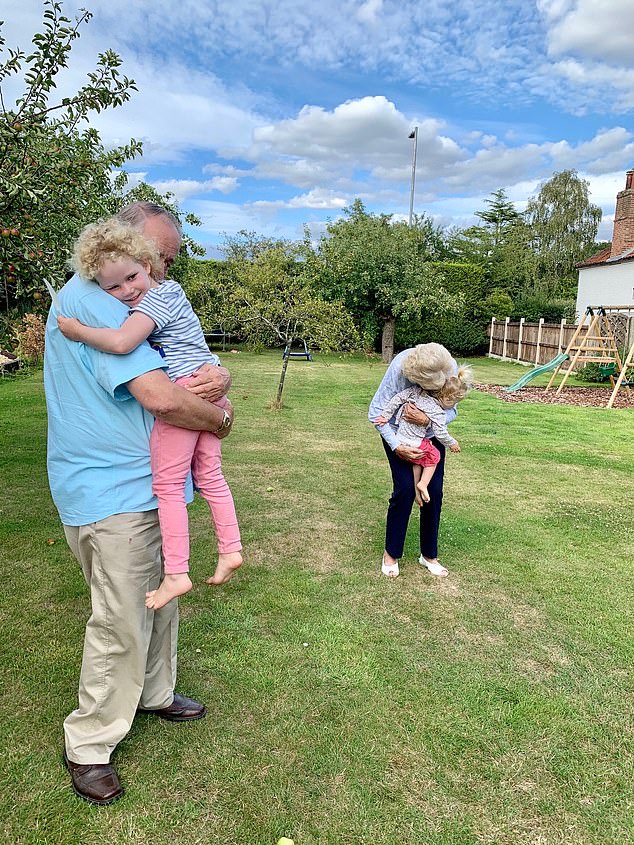 The longed-for reunion-with-hugs happened last Friday evening, and the girls were not told in advance. Vickie takes up the story, becoming emotional even in the telling

More worries for the whole family, but the operation went ahead last month, meaning any reunion was on hold, again.

‘It was frustrating, and yes, very worrying but there was no way we were taking any risks by having contact with Nanna,’ says Vickie. ‘When she had the third op, we actually thought it would be perhaps November before we could hug her again.’

Last Friday, however, the doctors declared that the operation had been a success, and that Theresa — now cancer-free — could celebrate by seeing her family.

‘We asked, ‘can there be hugs?’ and the doctors said, ‘yes’,’ Vickie adds. ‘As you can imagine, it was a pretty emotional time.’

There was an added cause for celebration. Vickie’s youngest child Edith had also been on the vulnerable list, because she had a kidney removed last year (she was born with a kidney problem).

On Wednesday of last week, after a check up at Great Ormond Street Hospital, Edith was also given the all clear.

‘So we had two all clears within a few days,’ says Vickie. ‘It was quite a week.’

The longed-for reunion-with-hugs happened last Friday evening, and the girls were not told in advance. Vickie takes up the story, becoming emotional even in the telling.

‘Before, when we’d seen them at a distance, we’d always said ‘STOP!’ and told them that they couldn’t touch Nanna or Grandad, except through the glass, because of the germs.

‘This time we explained that the germs were gone, and they could hug, although because Nanna had an ‘ouchy’, they should still be careful. They just ran straight up. I had a hug, too — I wasn’t going to let the moment pass — and I had a little cry.

‘The thing that struck me was how I’d missed smelling Nanna’s perfume. You can get a vague smell of it from a distance, but when you are touching you can kind of drink it in.’ How was it for the great-grandparents? ‘Just magical,’ says Theresa.

‘Obviously we’d seen them through the window so we had seen them growing, but what I couldn’t get over was how much they weighed. There was nothing to Edith when I’d last lifted her. Now, she’s heavy!’

And were the hugs all you hoped they would be? ‘Oh absolutely. You just take a simple thing like a hug for granted, and we are a very tactile family, too, so it has been difficult. My husband still gets hugs from our grandson who is 30 years old and 6ft 3in! We have missed it.’

Ray sums it up. ‘It’s hard to explain that special relationship between grandparents and grandchildren and great-grandchildren. It’s a different relationship even to the one you have with your own children and to not be able to hug them and spend time with them is hard. Especially when you are our age, and know you haven’t got that much of life left.’ 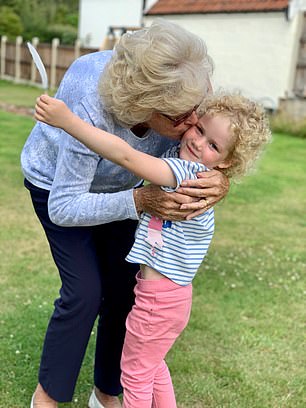 Both little girls are swept into the air. Great-Nanna — who is recovering from a cancer operation — can’t manage to swing her precious bundle as high, but no matter. The effort is valiant

They are a lovely family, and sticklers for the rules. I last spoke to them in March when they assured me that they would do whatever it took to keep everyone safe — and even then it was patently clear they weren’t just referring to their own family.

‘It was a life or death situation, for all of us,’ says Ray. ‘We followed the advice to the letter, not just because of Theresa’s situation, but because we owed it to the NHS to try and help flatten that curve. We had to make sacrifices, but we knew why.’

Thus Ray and Theresa were cooped up (‘in a bit of a goldfish bowl’ says Vickie) for over four months. The extended family did the shopping. Like so many octogenarians, they discovered the delights of online shopping, of Facetime and Zoom, and they simply hunkered down and got through it.

‘The technology was marvellous,’ admits Theresa. ‘Seeing all the grandchildren and great-grandchildren on Facetime was lovely, but obviously it’s not the same as being with them.’

Others didn’t seem to follow the rules to quite the same degree, though. What was their take on the Dominic Cummings debacle, where the Government adviser famously went to Barnard Castle to ‘test his eyesight’?

Ray Cossey, a man who calls a spade a spade, was not impressed. ‘I was quite disgusted with his explanation, but I’ve come to expect that from our political elite,’ he says.

He and Theresa are still being uber-careful — still isolating, effectively, but with the odd visit from the grandchildren and great-grandchildren factored in.

‘We are still being very careful too,’ says Vickie.

‘No one is going to take any risks because this isn’t over yet, but just being able to see Nanna and Grandad, and touch them — without the glass between us — is everything.’