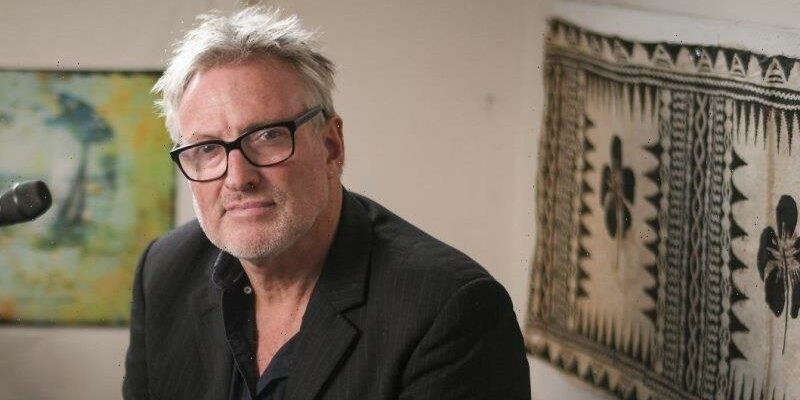 One of my favourite songs is Great Expectations by Melbourne band My Friend the Chocolate Cake. It resonates with me because it’s a musically upbeat song juxtaposed with lyrics of defeat:

And if the rainbow’s end is not around the next two turns,
We’re in a heap of trouble so let’s get away from here,
Best not to have great expectations,
Keep your sights down low. 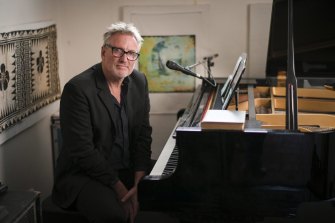 Defeat is probably too strong a word. The song is more a recognition that there are aims in life that we will perhaps never achieve.

I’ll never ride cross the Great Sandy Desert,
On a donkey or a mule,
And I’ll never bowl like Curtly Ambrose …

As a park cricketer, that last line rings true for me. As a fan of the Western Bulldogs, perennial underachievers in the AFL until their drought-breaking win in 2016, the sentiment of the song rings even truer.

In the year of Great Expectations’ release, I met My Friend The Chocolate Cake lead singer, David Bridie. We played cricket together in a community cricket match. 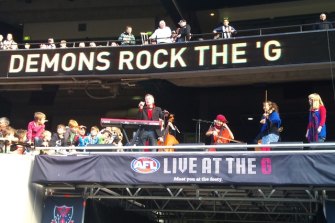 David Bridie singing at the MCG before a Melbourne game.

David and I became friends, bonding over a love of cricket and music, and perhaps more than anything, footy. David is a mad Demons fan. For him, it’s a generational thing. His love of the Melbourne Football Club came from his dad Ross, and has been passed on to his daughters.

Until 2016, he, like me, had endured the heartbreak that goes with barracking for a team that hasn’t won a flag in our lifetimes.

Since then, whenever I talk to David about being a long-suffering fan, I feel somewhat of a fraud. I’ve not forgotten those years – decades – of pain, but having been to the end of the rainbow, it’s hard to discuss it without coming across as patronising. 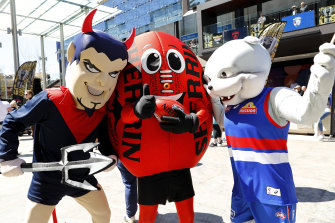 The Melbourne Demons and the Western Bulldogs will face off for the premiership in Perth on Saturday.Credit:AFL Photos

The Bulldogs are back in the grand final, and as fate would have it, we will be staring down David’s Demons.

David possesses a magnanimity that perhaps comes with being a fan of a success-starved team. When the Demons and Dogs both won their way through to the grand final, he tweeted: “Not that I have much experience in these matters, but surely it’s easier to have a GF opponent who you despise especially in our fairytale game. Go Dees, Go Dogs, but Go Dees just that bit more.”

It’s hard to imagine fans of perennially successful teams expressing such a sentiment. Will I lose that quality if the Dogs win on Saturday and keep winning flags beyond that? I hope not.

A month ago I wrote that I’d ride the Bulldogs bandwagon while we remained in the premiership hunt, then put aside by heartbreak and get behind Melbourne in solidarity with David and all my Dees friends. 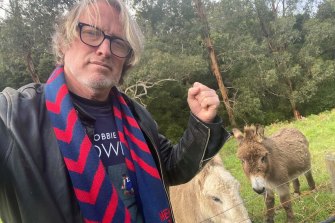 David Bridie on his property near Apollo Bay, where he will be barracking for the Demons on Saturday.

The heartbreak hasn’t come. The Dogs have defied the odds once more.

David currently resides outside of my 10km zone. We cannot meet up for a grand final beer but we have chatted by phone several times.

If the Dogs get up, I will be suitably euphoric, but I will be genuinely heartbroken for David. Footy fan convention says I shouldn’t be, but I will. If Melbourne wins I will be sad, but absolutely rapt for David. It will be all the more poignant because his father Ross passed away early this year.

I suspect neither of us will approach the grand final with great expectations, but for one of us, those expectations will be exceeded.

With a bit of luck, one day soon we’ll be able to meet up, share a few beers and discuss those not-so-great expectations.

Andrew Gigacz is a freelance writer.