The elderly couple were moving to New Zealand and didn’t like the idea of their puppy travelling in the hold of a commercial airliner.

They ended up paying $30,000 to hire a business jet with two crew, and the lucky dog travelled in style from Sydney to Auckland in the cabin alongside its humans. Everyone was happy. 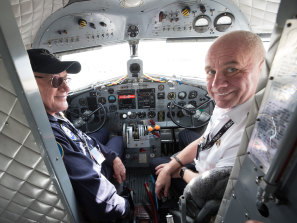 Mike Falls, left, and his son, Mike Falls jnr, owners of Shortstop Jet Charter in the cockpit of their DC-3 ‘Gooney Bird’ airliner that dates from 1945.Credit:Jason South

It was one of the many jobs executed by Shortstop Jet Charter, which, at 40 years old, is one of the oldest tenants of Essendon Fields Airport, formerly Essendon Airport.

Co-owners and pilots, Mike Falls, 83, and his son Mike Falls jnr, 56, have ferried around everyone from rock superstars (they can’t name any) to mining executives and couples getting married mid-air.

The company will display the pride of its fleet, a DC-3 classic airliner made in 1945 known as “Melbourne’s Gooney Bird”, at an open day on October 9 to celebrate the airport’s centenary, which will feature stalls, museum displays and aircraft demonstrations.

Proclaimed as Essendon Aerodrome by the Commonwealth government in 1921, it was Melbourne’s international airport from 1950 to 1970 and visitors have included Queen Elizabeth II and the Beatles. 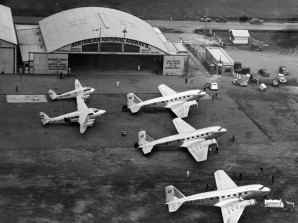 A 1934 photo shows Shortstop’s hangar was then the Australian National Airways hangar. Today the airport is surrounded by suburbia, spurring fierce debates between developers and residents.

Since 2001, the airport has been leased by a consortium led by the Fox and Beck families. Mike snr started a flying school at Essendon in 1976 and said the airport then was mostly “aviation associated businesses. You were battling to buy a pie.”

Today it has supermarkets, a DFO shopping centre, car dealerships, emergency services aircraft, a hotel and corporate jets. About 6000 people work at the airport, but its management wants to increase that to 20,000 by 2040.

Shortstop’s revenue has decreased by 80 per cent during the COVID-19 pandemic and the paperwork needed for permission to fly anywhere has soared. “It’s diabolical,” Mike jnr said. “The flying’s the easy bit.” 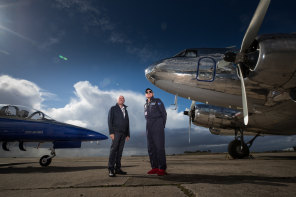 Field of dreams: The father and son team at Essendon Fields Airport with their vintage DC-3 airliner (right) and their L39 Albatros jet trainer. Credit:Jason South

However, Shortstop still flies passengers to King Island and back in the DC-3 on most Sundays, when COVID-19 restrictions allow.

And they still have regular business clients. Once or twice a month they help save people’s lives by transporting live organs for transplant, accompanied by medical teams.

Over 18 hours, Mike snr once picked up an organ from Napier, in New Zealand, and flew it to Melbourne. Mike jnr then flew the organ to Perth.

Last year, Mike jnr transported three dogs and their owners from Melbourne, home to Guangzhou in China. The cost of the charter was about $250,000. 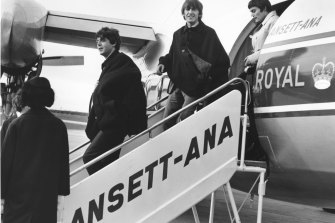 In pre-COVID times, tourists would pay hundreds of thousands of dollars to hire a plane and pilots to see Australia privately in a week, flying to spots such as Kangaroo Island, Uluru and Broome.

Some Shortstop clients fly to holiday homes interstate and in New Zealand up to 20 times a year.

For now, Shortstop aim to make it through the pandemic retaining their 11 staff.

“It’s no good staggering to the finishing line and falling over, we’ve got to get there in a state so we can continue,” Mike snr said. 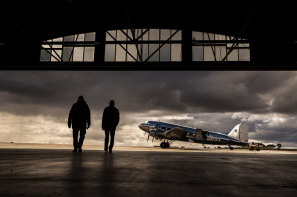 “This is a bad time and we want to survive it,” he said. “But our tale would be the same for businesses all around Australia.”

More information on Essendon Fields Airport centenary is at ef100.com.au