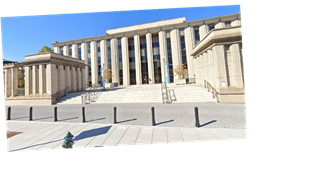 A Georgetown law professor has resigned following his participation in a Zoom call with a colleague whose comments about her Black students having a lower academic performance every semester led to her being fired.

The footage at the center of the controversy – which has gone viral on Twitter with more than 1 million views – shows Professor Sandra Sellers speaking to Batson over Zoom about students’ academic performance.

“You know what? I hate to say this, I end up having this angst every semester that a lot of my lower ones are Blacks,” Sellers says. “Happens almost every semester and it’s like ‘oh come on.'”

She goes on: “I get some really good ones but there are also usually some that are just plain at the bottom, it drives me crazy… so I feel bad.”

Batson appears to nod his head but mostly remains silent as Sellers is talking.

Treanor announced Sellers’ firing Thursday afternoon and said Batson has been placed on administrative leave pending the results of an investigation by the Office of Diversity, Equity and Affirmative Action.

“As I wrote to you last night, I am appalled that two members of our faculty engaged in a conversation that included reprehensible statements concerning the evaluation of Black students,” Treanor said in a statement to Fox News. “I have further reviewed the incident and have now spoken to Professor Sellers and Professor Batson, giving each the opportunity to provide any additional context.”

Treanor said during his conversation with Sellers, he informed her he was “terminating her relationship with Georgetown Law effective immediately,” despite her saying she intended to resign.

In a resignation letter Sellers provided to Fox News, she wrote to Treanor that she is “deeply sorry for my hurtful and misdirected remarks.”

“While the video of this incident is an excerpt from a longer discussion about class participation patterns, not overall grades, it doesn’t diminish the insensitivity of I have demonstrated,” she continued. “I would never do anything to intentionally hurt my students or Georgetown Law and wish I could take back my words.”

“My comments were the inarticulate reflection of long soul searching. I must do better to understand and address these issues,” Sellers added. “I am committed to doing this for myself and also looking for ways I can combat racism in the Georgetown community.

Batson did not immediately respond to a request for comment from Fox News. As of Sunday, his page on Georgetown Law’s website appeared to have been taken down.

The video of the conversation was first posted to an online database accessible by students taking classes remotely because of the coronavirus pandemic, according to NBC News.