Just last week, I participated in events marking the Transgender Day of Visibility, a vital time to acknowledge and celebrate our trans and gender diverse communities. This week, I find myself again asserting the fundamental human rights of trans people.

Julie Szego’s recent op-ed surrounding Melbourne councillor Rohan Leppert’s commentary on the “trans issue” in the Greens Party does no favours to Victoria’s equality movement. Szego’s article muddies the understanding of the practices of gender affirmation. 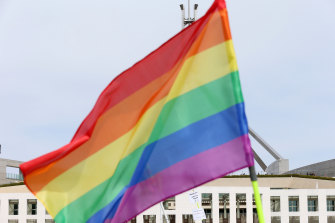 Let’s make one thing clear: the right of trans and gender diverse people to exist and live their lives with bodily autonomy is not up for debate.

Like all of us, trans and gender diverse people have their rights protected under several laws, which need to be respected and upheld.

Szego’s article seeks to create a false divide between women’s rights and the rights of trans people. It does real damage to real people.

As a young, queer Wiradjuri cis-man and the only Commissioner for LGBTIQ+ Communities in Australia, I hear and see the slurs and fear-mongering that target trans, gender diverse and non-binary people. I recognise the words and tactics – unfortunately, they are the same ones used against gay men, lesbians, and bisexual people for many decades.

Most people would now never think of being overtly homophobic or biphobic, but transphobia still seems acceptable to them. Unfortunately, the extent of misinformation being peddled has made it hard to know where to begin in correcting it.

The fact is, supporting people to affirm their gender has a positive impact.

A few weeks ago, Psychology Today published an article reviewing sixteen studies on the impact of gender-affirming medical care for transgender youth. The author concluded that “the body of research indicates that these interventions result in favourable mental health outcomes”.

We know when people aren’t supported to be who they are, the opposite is true.
Our Change and Suppression (Conversion) Practices legislation includes protections against conversion practices, usually conducted by conservative religious groups. They have nothing to do with “therapy”, have no evidentiary basis in medicine, and can cause actual long-term harm.

Under this legislation, those who engage in these practices could face jail terms, but only if they cause injury or serious injury.

Importantly, affirming care is embedded in the law. It makes clear that supporting someone “to express their gender identity, provide acceptance and support or facilitate a person’s coping skills, social support and identity exploration and development” is a good thing.

This is echoed by The Age social affairs editor Jewel Topsfield’s latest podcast episode of Enough that explores youth mental health in LGBTIQ+ communities with the positive outcome of affirmation care experienced by Alex Dalton.

The Victorian government has backed trans peer support with access to gender-affirming care. The approach here in Victoria is embedded with careful scientific, psychological, and medical research and co-designed with trans and gender diverse people.

Affirmative care doesn’t turn anyone trans. Rather, it puts them at the centre of their care.

All puberty blockers are reversible, and affirmation surgery for those under the age of 18 rarely occurs in Victoria, if at all.

Despite this, trans and gender diverse Victorians face significant challenges in the complex process of questioning, defining, and affirming their gender identity. Thankfully, they are supported by the world-leading Australian Standards of Care and Treatment Guidelines: For trans and gender diverse children and adolescents developed by Dr Michelle Telfer here in Victoria.

This article is a defence of trans people, because sadly they still need it. I would prefer trans and gender diverse people be celebrated, loved and supported, not attacked.

Affirmative care is about ensuring that all trans people survive, it’s not so they can cede their bodily sovereignty to join the girl guides, as Szego suggests.

I understand that for some people, this can feel new and strange. But no one in modern Australia should be discriminated against because of a failure of others to comprehend the hardships faced by those with a desire to simply be who they are.

Todd Fernando is the Victorian Commissioner for LGBTIQ+ Communities and a medical anthropologist.