One reason more young men than young women thrive in the world of coding, according to Melbourne girls' coding queen Sarah Moran, is that from the moment they enter the lucrative field "they have groups of friends they can nerd out with".

For women, who still make up only 12 per cent of engineers in Australia (and who receive only 3 per cent of the startup venture capital), finding peers is much harder.

Not one to waste a crisis, Ms Moran, founder of the female-focused tech school Geek Girl Academy, has spent the city's lockdown helping girls as young as eight bond over their love of computer coding – a field she says is gradually starting to address its heavy male bias. 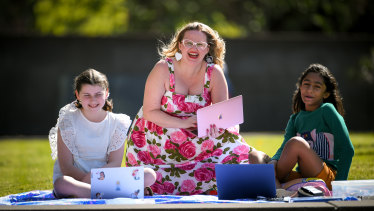 Girls have been making friendships while sharing coding fun on free forums during lockdown, one of which is run by Sarah Moran of Geek Girl Academy (with keen tech learners Issy Eury-Frigo and Vani Vasan).Credit:Eddie Jim

Vani Vasan, 10, has not missed a single Tuesday or Thursday coding session run by Ms Moran's group in the months since Melbourne's rolling lockdowns began. Girls aged 8 to 12 have been getting together online and supporting each other to learn and explore where coding can take them.

"I like coding and making games, making pixel art gifs, I've made loads of things," says Vani, who has been learning to use visual block coding language Scratch in the hangouts after her dad helped her find Geek Girl.

"I've made a Kamala Harris gif in pixel art, and I did one on Black Lives Matter where a cat comes on the screen and tells you about [the movement]. I've also done some quiz programs for people who are bored, like me, and want to answer some questions and have a bit of fun."

Ms Moran, who usually runs workshops and women's hackathons in real life, used the JobKeeper allowance to put staff onto the supported online workshops she had previously considered funding but didn't know would work.

Such is the following among girls who have found the hangouts and started to make friendships, Ms Moran hopes the workshops will help them stick with coding. She plans to keep them going after lockdown.

"We realised girls would like the social connection of online forums, which we moderate so they can get answers to tech questions, and they are learning to teach each other.

"It's very cute, they share games they're working on and some have made games they play together," she said. While Ms Moran's business focuses on girls, she's quick to point out there are also plenty of options for keen boy coders, including groups such as CoderDojo and Code Camps.

Eleven-year-old Issy Eury-Frigo, whose dad Nick teaches digital learning at a girls' secondary school, says she was attracted to learn more about coding by playing with the 3D design platform Tinkercad, and the game Minecraft.

Across town eight-year-old coder Grace Halifax set her own bar high when contemplating how to occupy herself and her young peers as lockdown stretched on. 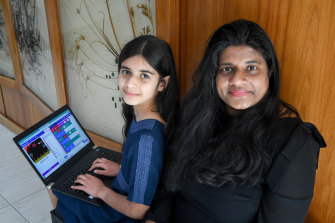 Grace Halifax, 8, helped by her mother, Liz, has been teaching 270 other children how to code via Zoom classes during lockdown.Credit:Justin McManus

The tech-loving year 3 student decided to share her knowledge of machine learning with other kids, using Scratch, Python and BBC Micro Bit. She used her local MP's Facebook page to invite other kids to join her and has had 270 children attend her Zoom tutorials.

"I started coding in prep and in most of my science projects I've used coding a lot," says Grace, whose mother, Liz Halifax, is a chemical engineer who also writes code.

"Coding can be used for lots of things, making an alarm clock to go off when the sun rises, or making a step-counter; it can collect data on how city life changes, or calculate the size of your backyard," she says.

One project involves teaching kids to code a game of rock, paper, scissors on the BBC Micro Bit platform.

Grace has produced two free booklets, with video tutorials embedded, to distribute to her students and hopes to expand her free teaching to real-life sessions for children who may not otherwise have access to coding.

Our weekly newsletter will deliver expert analysis of the race to the White House from our US correspondent Matthew Knott. Sign up for The Sydney Morning Herald‘s newsletter here, The Age‘s here, Brisbane Times‘ here and WAtoday‘s here.