The GCC summit calls for unity but fails to discuss blockade of Qatar imposed by other Gulf states since 2017. 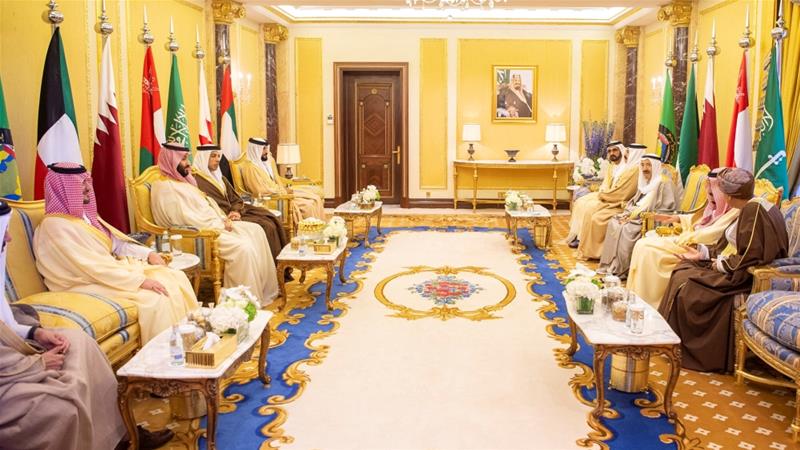 The 39th Gulf Cooperation Council (GCC) summit came to a close in the Saudi capital, Riyadh on Sunday, without any major breakthroughs to resolve a diplomatic crisis that continues to grip the region.

The Gulf crisis, being described by observers as the elephant in the room, was not brought up at the annual summit. Saudi Arabia, Bahrain, the United Arab Emirates (UAE) and Egypt have imposed an air, land and sea blockade of Qatar since June 2017.

The blockading quartet has accused Qatar of supporting “terrorism”. Qatar has denied the charges and said the boycott aims to impinge on its sovereignty.

While the crisis was not explicitly mentioned during the meeting, a call for unity was issued at the end of the gathering in a joint communique.

A Qatari foreign ministry spokesman blasted the communique on Twitter for not discussing or resolving the blockade on Qatar.

The Saudi king Salman bin Abdulaziz had invited Qatari Emir Sheikh Tamim bin Hamad al-Thani to attend the talks, but the Emir stayed away from the annual summit.

Instead, a delegation headed by Qatar’s Minister of State for Foreign Affairs Sultan bin Saad Al Muraikhi, represented the country at the summit.

The decision was met with criticism from some of the council’s members, but Doha brushed aside the comments.

“Qatar can make its own decisions and had attended [last year’s] Kuwait summit while the leaders of the boycotting countries did not,” said Ahmed bin Saeed Al Rumaihi, director of the information office at Qatar’s foreign ministry.

The GCC, a political and economic alliance of countries in the Arabian Peninsula, was established in 1981 to foster socioeconomic, security, and cultural cooperation.

During a press conference following the summit late on Sunday, Saudi Arabia’s Foreign Minister Adel al-Jubair said that cooperation continues between Qatar and other GCC members in the fields of military operations and training, and security and ministerial exchanges.

“Members of the council are determined that the crisis with Qatar does not have a negative effect on the council in general and its structure,” he said.

“The goal is to preserve all of these important structures, until the crisis ends, hopefully soon.”

Given last December’s summit in Kuwait was cut short, many questioned whether this year’s gathering would take place altogether. At the time, the UAE announced it had formed an economic and military partnership with Saudi Arabia separate from the GCC.

But in his opening remarks, Saudi king Salman noted that he objective of the gathering is to set up a coordination council and to adopt a strategy for economic, development and military integration.

King Salman accused Saudi archrival Iran of “continuing to interfere in the affairs of the countries in the region”.

He stressed the importance of the GCC and the need to “defend, in collaboration with our partners, security and stability in the Gulf”.

Kuwait, a traditional mediator in the region, called for a halt to media campaigns in the Gulf.

This year’s summit also came amid the diplomatic crisis over Saudi journalist Jamal Khashoggi’s assassination, for which Riyadh has faced global condemnation.

Khashoggi, a Washington Post columnist who lived in self-imposed exile in the US, was killed inside the kingdom’s consulate in Istanbul in early October.

The summit expressed support to the Saudi measures in dealing with the Khashoggi case, despite mounting international pressure.

As Saudi Arabia’s de facto leader, Crown Prince Mohammed in Salman in particular, has come under scrutiny over the country’s involvement in the war in Yemen, which has caused thousands of civilian deaths, as well as its intensifying crackdown on public dissent in the kingdom.

The closing declaration announced that the council would continue to support the Palestinian cause, and a political solution to the war in Yemen.

It also revealed that member states would work to ensure financial unity until 2025, and work towards establishing a unified military command.