Conservative French politicians expressed concern Thursday about the prospect of modern architecture being added to Notre-Dame cathedral after the government invited design proposals for a new roof and spire.

Politicians from France’s right-wing Republicans and far-right National Rally (RN) party called on the government to restore the cathedral exactly as it was before the devastating fire broke out on Monday evening.

French President Emmanuel Macron has set a five-year target for the reconstruction to be completed and has said ‘an element of modern architecture could be imagined.’ 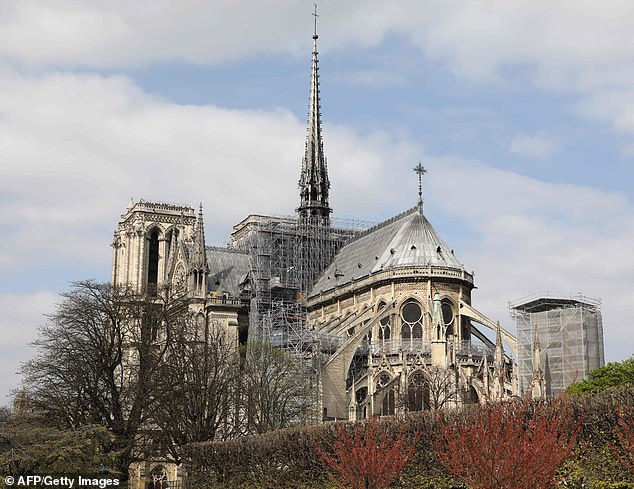 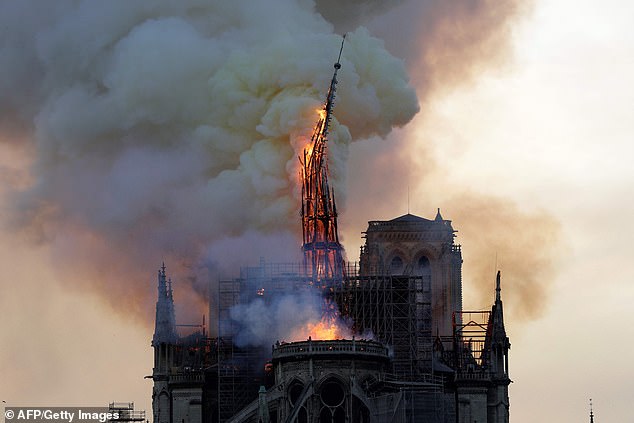 Prime Minister Édouard Philippe has opened a competition to redesign the spire (pictured as it fell down), saying it could be adapted ‘to the techniques and challenges of our time’

‘Let’s stop this madness: we need to have absolute respect for French heritage,’ Jordan Bardella from the National Rally told LCI channel, rejecting the idea that ‘some modern art thing’ might be added.

‘Modern art makes me nostalgic for the arts of the past,’ he added.

Construction of Notre-Dame began in the mid-12th century and continued for 200 years, but the landmark has been repeatedly restored over its history.

It fell into disrepair after the French Revolution in 1789 and is widely thought to have been saved by the Victor Hugo’s 1831 novel ‘The Hunchback of Notre Dame’ which re-ignited pride in the building.

The spire which collapsed on Monday evening was a relatively modern addition made during an overhaul undertaken by architect Eugene Viollet-le-Duc in the mid-19th century.

‘There will be a competition that will get architects from all over the world to reflect,’ Culture Minister Franck Riester told RMC radio. 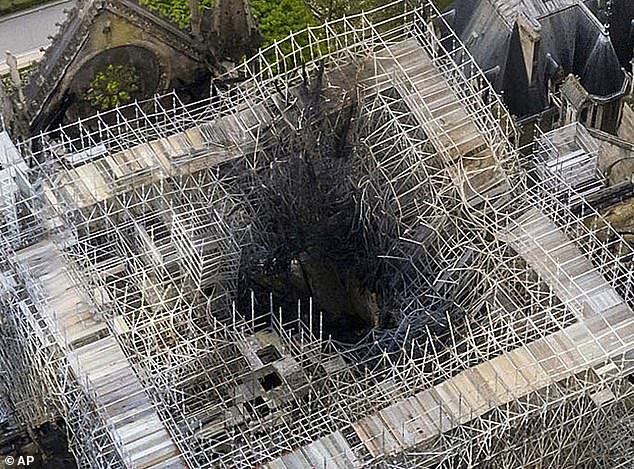 The spire was added to the cathedral during the mid-19th century by architect Eugene Viollet-le-Duc during another renovation, but politicians still say it should not be changed 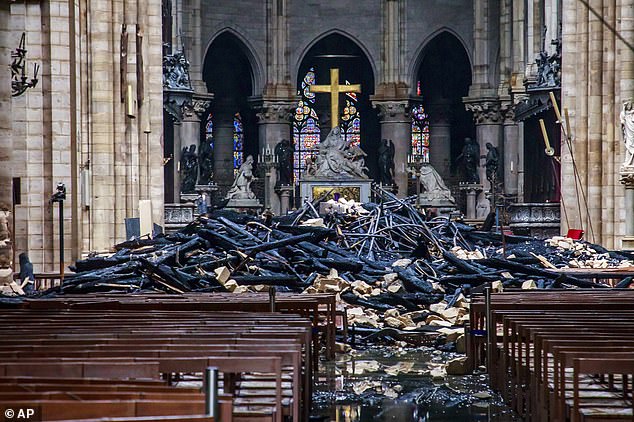 ‘Every time cathedrals are restored anywhere in the world they are done a bit differently,’ he added. ‘We shouldn’t be dogmatic about thinking a cathedral needs to redone how it was.’

A descendant of architect Viollet-le-Duc urged on Thursday that the steeple be rebuilt in some form after the government said one option might be to do without one altogether.

‘Not reconstructing the spire would equate to amputating an element that belongs to it,’ Jean-Marie Henriquet, 76, told AFP.

‘It would be tragic if grief over the destruction gives way to a mania for disruption, and that the pride of the ‘new world’ distorts the best of the old instead of transmitting it,’ he wrote on Twitter.

One of the most controversial additions to Paris in recent times was the glass pyramid built in front of the Louvre palace in central Paris.

Hated by many Parisians when it was unveiled by Chinese-American architect I. M. Pei, it has celebrated its 30th birthday and has become an attraction in its own right.