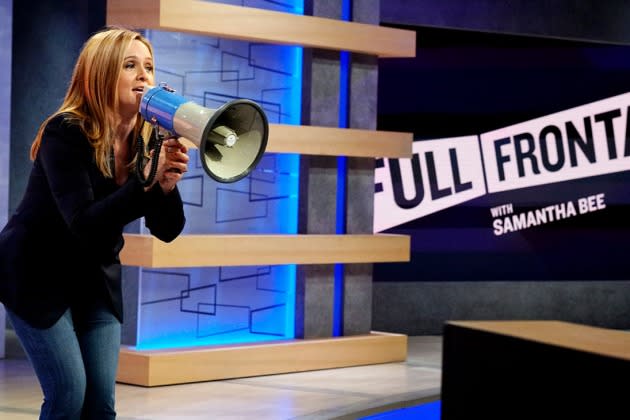 TBS has canceled its late night show Full Frontal With Samantha Bee in the latest pullback from original programming at the cable outlet.

The Emmy-winning late night series is finished after seven seasons, with the last installment having aired on June 23.

More from The Hollywood Reporter

“Samantha Bee is honored to have hosted the Emmy Award-winning series Full Frontal With Samantha Bee on TBS for seven seasons, but the show will not return to the network this fall,” a statement from Bee’s reps reads. “Bee made television history in the late night space, paving the way for female voices in what has traditionally been, and continues to be, a male-dominated landscape. Full Frontal with Samantha Bee consistently broke barriers with Sam and her team boldly using political satire to entertain, inform and empower viewers, while embracing critically underrepresented stories, particularly about women.”

Full Frontal is the latest in a string of cancellations at the so-called TNets — TBS, TNT and TruTV — following the merger of WarnerMedia and Discovery. TBS has also opted against airing the completed second season of Nasim Pedrad’s Chad and canceled The Last O.G. and unscripted show The Big D in the past couple of months, the latter three weeks before it was scheduled to premiere. TBS also scuttled a Damon Wayans Jr.-led comedy called Kill the Orange-Faced Bear.

The channel’s roster of originals now consists only of animated series American Dad, which is renewed through 2023, and the previously renewed fourth season of anthology comedy Miracle Workers.

“As we continue to shape our new programming strategy, we’ve made some difficult, business-based decisions. Full Frontal With Samantha Bee will not return to TBS,” a network rep said in a statement. “We are proud to have been the home to Full Frontal with Samantha Bee and thank Sam, and the rest of the Emmy-nominated team for their groundbreaking work. We celebrate this extraordinarily talented cast and crew and look forward to exploring new opportunities to work with them in the future.”

The number of original series on TBS, TNT and TruTV had been declining before WarnerMedia and Discovery merged, but the process has accelerated since then. TNT will be out of the scripted business after the final seasons of Animal Kingdom, which is currently running, and Snowpiercer air. TruTV, which focuses on unscripted shows, has a healthier roster of about a dozen originals.

Best of The Hollywood Reporter