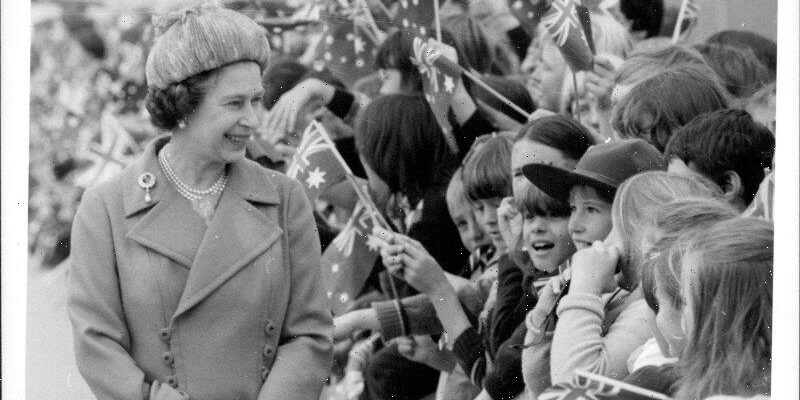 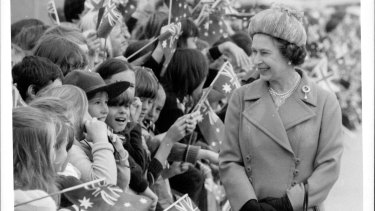 The Queen talks to some of the children who welcomed her to MelbourneCredit:The Age Archives

While rows of civic dignitaries and their spouses waited on a raised dais in the City Square for the Queen to come and talk to them, she insisted on continuing to talk with crowds lining the route of her walk from Bourke Street.

Running way behind schedule, she then briskly declared the square opened, brushed past the officials once more and made straight for a group of the construction workers who have been building the still uncompleted square.

While the official party gazed down in bewilderment from above, the Queen spent a full five minutes with the workers and then set off again to talk to more crowds along Flinders Lane.

All the while, she was smiling so broadly that she came perilously close to something so unroyal as a sustained grin.

As Royal household officials put it, the Queen is never so happy in her public duties as when she is surrounded by ordinary people shouting their affection for her.

Her walk had begun on the corner of Swanton and Bourke streets and what was to look like a florists’ picnic began just a few yards into her walk along Swanston Street when Michelle Roberts of Moorabbin pressed into her hands a bunch of proteas, cut by her mother from the back garden yesterday morning.

Just 10 metres further on, she accepted a bunch of violets from Narelle Forbes, nine, of Cowper Street, Essendon North.

For the rest of her walk the Queen clung on to these first two floral tributes, content to pass back to her ladies-in-waiting the dozens more pressed on her by children from three to 16.

Her Court ladies, the Marchioness of Abergavenny and Lady Susan Hussey, acted as eager sheepdogs, herding towards her little children desperate to pass their flowers (and in one case a toy koala bear) to the Queen.

As she strolled with the Premier, Mr Hamer, her smile grew broader and broader and soon she was laughing openly. The questions she asked were trite, the replies nervous and stilted but the whole area was glowing with a party spirit in which the Queen basked delightedly. 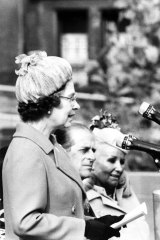 Again, Melbourne had shown that although so many had said previously they would not come to see the Queen again, yet come they did in their tens of thousands.

By the time she reached the City Square, the lone Australian republican flag waving fiercely in the centre of a press of Australian flags and Union Jacks had a lonely, even desperate air.

Across the other side of Swanston Street, the Duke of Edinburgh was sauntering with just as much practised ease.

He gave a big laugh to a group of students in hired uniforms announcing they were “British Imperialists” and members of a pacifist army called “Alf’s Imperial Army”. They claimed to have staged a major flour and water battle at Melbourne University earlier in the day.

As the Queen moved on towards the square, her chief police officer, Commander Mike Trestrail, was showing his artistry with the black umbrella which has become his trademark on Royal tours throughout the world. Just behind him, the Queen’s Private Secretary. Sir Philip Moore carried a reserve black umbrella in case Commander Trestrail might need to erect an impromptu barrier around the Queen should the crowds press forward too eagerly.

But there was not the faintest sign of this. Good humour, affection, and if love is not too hackneyed a word, then that too, washed in waves over the Queen from the Melbourne crowd.

Outside the Town Hall, Mr. Hamer and his wife handed over the Royal pair to the guidance of the Lord Mayor, Cr Ralph Bernardi and Mrs Marie Bernardi. Mrs Bernardi, a vision in lavender, looked remarkably like a giant version of the violets carried by the Queen.

In her speech, the Queen recalled that it was ten years ago when she and Prince Phillip made their “first walkabout in Australia — in Collins Street.

“I still remember vividly the novelty and excitement of that occasion. Since then we have walked, talking with the people, through many cities all over the world, but nothing could be more heart-warming than to be back again among a Melbourne crowd.”

Officials who were on that tour a decade ago recalled yesterday that Melbourne, considered a more reserved city, was regarded as more of a risk than Sydney for a Royal walkabout. When it proved fantastically successful, the Queen was as excited as a schoolgirl.

When the Queen drew back a curtain to start a giant water spillway in the square, she knew that the $23.5 million project which has taken 19 years to this stage, was still not completed.

But those close to her say she is not totally cynical at the impulse of officialdom world over to polish up the world for her sake. She welcomes the raw emotion of the efforts and sees an overall good resulting in the communities she visits.

So while she was fully aware that the square is complete only in the visual sense, that yesterday’s whole exercise was one of improvised window-dressing, she enjoyed it all.

By the time it was all over, many observers had mixed feelings.

There was the bewilderment of why it should be thought Melbourne needs more shops when it seems one quarter of those already trading are going broke; balanced against this, the square, filled for the first time with people, did seem in the Queen’s words: “A new heart’ for Melbourne.

As for the Queen, she was left with the problem of what to do with the mountain of flowers piled into the boot of her Rolls-Royce.

An official said that after she had luncheon at Government House, they would be delivered to a hospital or some other suitable institution in the city. All those donors clever enough to have marked their posies with their name and address will receive a letter of thanks from one of the Queen’s ladies-in-waiting.

What the Queen said

This is what the Queen said yesterday when opening the City Square:

“My Lord Mayor, we are delighted to be with you today in this new centre of Melbourne.

“It is ten years ago that we undertook our first walkabout in Australia in Collins Street and I still remember vividly the novelty and excitement of that occasion.

“Since then, we have walked, talking with people through many cities all over the world, but nothing could be more heart-warming than to be back again among a Melbourne crowd.

“Melbourne is renowned for beautiful parklands, wide streets and the contrasting architecture of the modern and an age past.

“This magnificent City Square is a far sighted conception and it will add a new focus to Melbourne, providing an opportunity to relax, to meet friends and to reflect on yet another illustration of Australia’s genius for creating a special image of her own in the 20th century.

“I warmly congratulate all those whose vision and inspiration have helped to plan, design and build this remarkable new heart for your city. I have much pleasure in declaring open Melbourne’s City Square.”