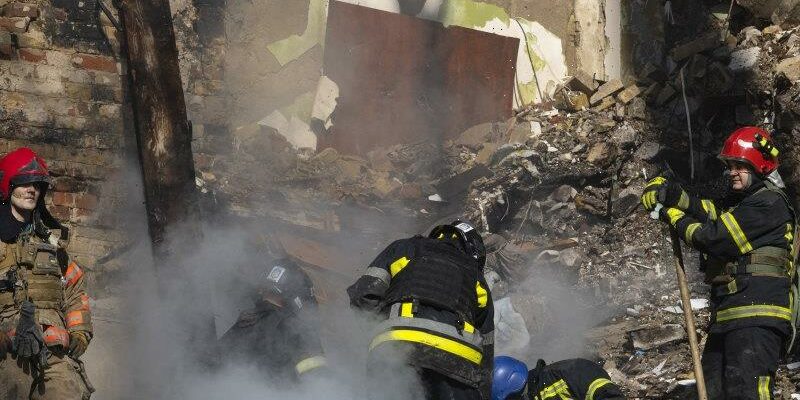 Kyiv/Mykolaiv: Russian missiles crashed into infrastructure targets across Ukraine on Tuesday as Moscow stepped up what looked like a deliberate campaign to destroy electricity and water facilities before winter.

The major of Zhytomyr, a city of 263,000 people, said the attacks had knocked out the power and water supply, and two explosions rocked an energy facility in the southeastern city of Dnipro, a city of nearly 1 million, causing serious damage, according to Kyrylo Tymoshenko, a Ukrainian presidential aide. 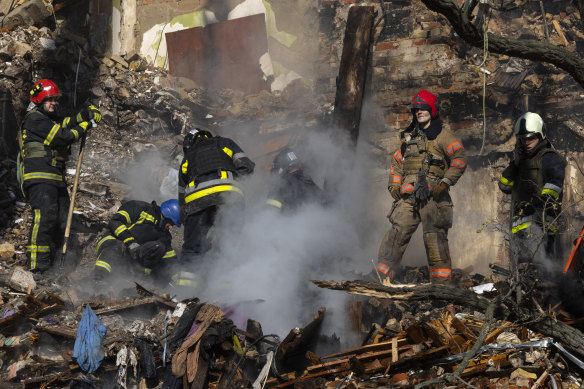 Firefighters at a four-storey residential building after a “kamikaze drone” attack in Kyiv on Monday.Credit:Getty

In the southern Ukrainian port of Mykolaiv, a missile slammed into an apartment building killing at least one man, a Reuters witness said, and blasts were heard and smoke seen rising in Kyiv, the capital.

There were also reports of power facilities being targeted in the city of Kharkiv, a city with a pre-war population of 1.43 million people, close to the Russian border.

Ukrainian President Volodymyr Zelensky accused Russia of terrorising and killing civilians with the air attacks, which came a day after drone strikes on Kyiv and other cities killed at least four people.

“Ukraine is under fire by the occupiers. They continue to do what they do best – terrorise and kill civilians,” Zelensky wrote on the Telegram messaging app.

“The terrorist state will not change anything for itself with such actions. It will only confirm its destructive and murderous essence, for which it will certainly be held to account.”

There was no immediate word on how many people had been killed in the strikes.

Russia earlier this month named General Sergei Surovikin as the overall commander of what Moscow calls its “special operation” in Ukraine. Surovikin served in Syria and Chechnya where Russian forces pounded cities in a scorched earth policy against its foes.

Nicknamed “General Armageddon” by the Russian media because of his alleged toughness, his appointment was followed by the biggest wave of missile strikes against Ukraine since Moscow invaded on February 24.

Russia carried out its latest strikes on Tuesday after the United States warned it would hold Moscow accountable for any war crimes.

Moscow denies targeting civilians. Its defence ministry has said it is carrying out attacks on military targets and energy infrastructure across Ukraine using high-precision weapons.

In the port city of Mykolaiv, a Reuters witness said they had heard three explosions in the early hours of Tuesday.

A missile completely destroyed one wing of a building in the downtown area, leaving a massive crater, they said. A fire crew was seen pulling the dead body of a man from the rubble. 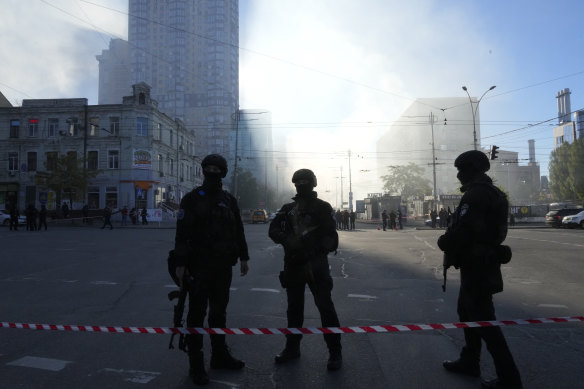 Police block a square after a drone fired on buildings in Kyiv on Monday.Credit:AP

“In Mykolaiv, the enemy destroyed a residential building with S-300 missiles. A person died. There was also a strike at the flower market, the chestnut park. I wonder what the Russian terrorists were fighting against at these absolutely peaceful facilities?” Zelensky said.

The Russian strikes followed advances by Ukrainian forces in the east and south and came after an October 8 blast on a bridge linking mainland Russia to Crimea – the peninsula Russia annexed from Ukraine in 2014.

Putin sent tens of thousands of troops into Ukraine on February 24 in what he called a “special operation” to root out what it calls dangerous nationalists.

Ukrainian forces have mounted stiff resistance, with the help of arms supplied by the United States and its allies, who have also imposed sweeping sanctions on Russia in an effort to force it to withdraw.