Paris:  France's anti-government "yellow vest" protest appears to be petering out,  but another day of disruption  through road blocks across the country  led to the death of a 10th person since the start of the movement last month.

The turnout on the streets of Paris and other cities on Saturday was smaller than in previous weekends, authorities said. No major damage or clashes had been reported between police and protesters as of mid-afternoon.

About 23,800 people were demonstrating early in the afternoon, including fewer than 1000 in Paris, the interior ministry said. This was down from a week ago at the same time when there were 33,500 protesters out on the streets, 2200 of which were in Paris. 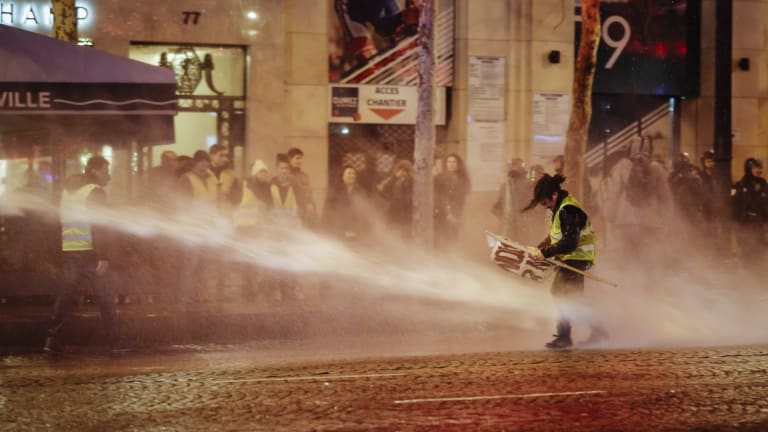 A demonstrator wearing a yellow vest is blasted with a police water canon on the Champs Elysees avenue in Paris on Saturday.Credit:AP

Authorities had expected a march in Versailles, whose castle is a symbol of French state power and one of Europe's top tourist attractions.

But few "gilets jaunes" (yellow vest) protesters – so-called after the high-visibility jackets French motorists must carry in their cars – showed up in the formal royal city.

Dispersed groups of protesters were out on the streets of Paris near tourist landmarks such as the Sacre Coeur Basilica and the Galeries Lafayette department stores, singing La Marseillaise and calling for President Emmanuel Macron's resignation.

Attendance was on the rise, however, in Lyon and Bordeaux, according to Reuters witnesses. Protesters also managed to block some of the big highways, including one leading to Spain. 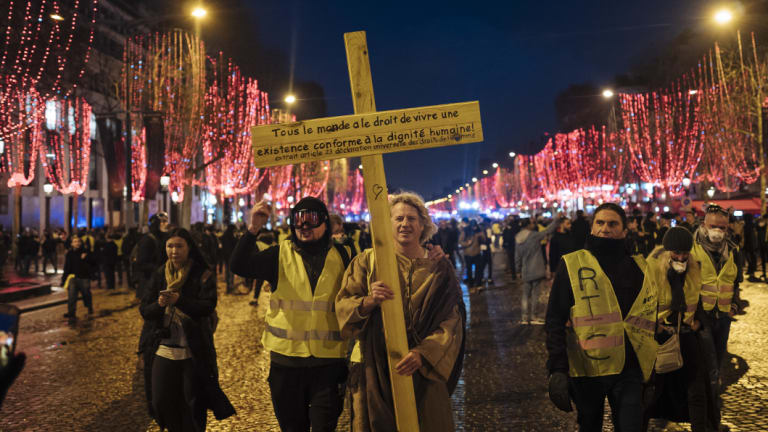 Demonstrators wearing yellow vests hold a cross with an article of the declaration of human rights during a demonstration on the Champs Elysees avenue in Paris on Saturday.Credit:AP

Late on Friday, a 36-year-old man died in Perpignan, southern France, when his car hit a truck at a road block erected by protesters, raising the death toll linked to the demonstrations to 10.

On Saturday, police fired tear gas against protesters who gathered near Macron's villa in the chic resort of Le Touquet in northern France.

In the French capital, the police arrested 109 protesters, seven of whom were held in custody.

Three weeks ago the protests in Paris turned into some of the worst unrest seen in the capital since the student-led civil unrest of 1968. Cars were set on fire, bank and insurance offices' windows smashed and street furniture was vandalised.

Of the 10 deaths linked to the protests, most have been the result of road accidents.

The "yellow vest" protesters began in mid-November to rally against fuel tax increases and subsequently against the wider liberal economic reform policy of Macron, who made tax and salary concessions earlier this month.

But the movement has gradually lost steam in recent weeks.

Since he caved in to protesters in a TV address on December 10, Macron, who turned 41 on Friday, has largely kept out of the public eye, staying inside the Elysee palace for what his press team called internal meetings.

A recent poll showed France's far-right party National Rally, formerly known as the National Front, confirmed it was so far the biggest political beneficiary of the protests.