Victory for the Yellow Vests? French president Macron ‘suspends fuel tax hikes in humiliating U-turn in a bid to end savage rioting’ – but protesters warn of yet more action

French President Emmanuel Macron will today suspend a hated fuel tax hike in bid to end savage rioting across the country, a government source has claimed.

The humiliating U-turn was set to be announced by the head of state’s prime minister, Edouard Philippe, following emergency talks at the Elysee Palace.

‘It will mean that none of the fuel surcharges set for the new year will take effect,’ said a government source. ‘Mr Philippe will announce the decision to MPs on Tuesday morning.’

But Yellow Vest fuel protesters who have reduced Paris and other cities and towns to warzones over the past two weekends said their demonstrations would continue as they campaign for more tax reductions. 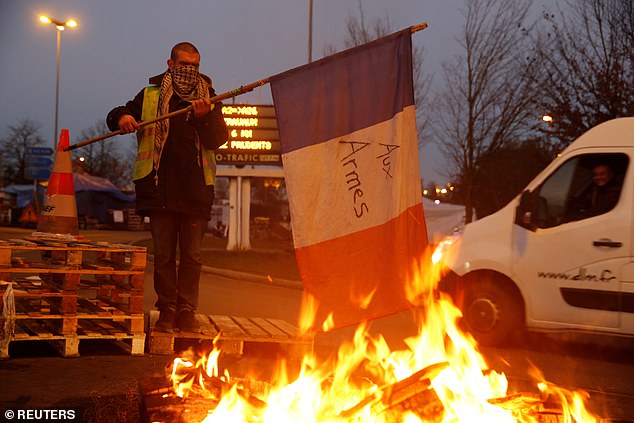 The French Prime Minister is set to announce hated fuel tax hikes will be suspended following days of rioting, government sources have revealed this morning. Pictured: A protester holds a flag near burning debris at the approach to the A2 Paris-Brussels Motorway this morning 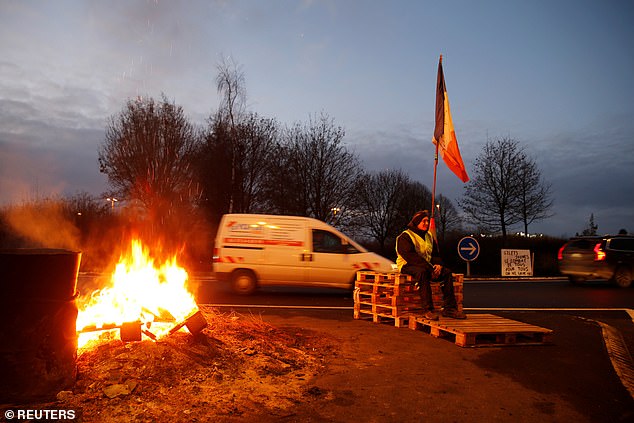 The suspension will be accompanied by other measures aimed at calming two weeks of nationwide demonstrations, the sources said. A protester sits under a French flag near burning debris near the A2 Paris-Brussels motorway in Fontaine-Notre-Dame this morning 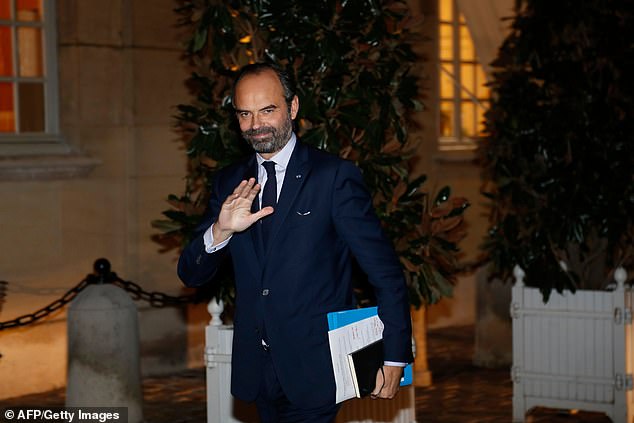 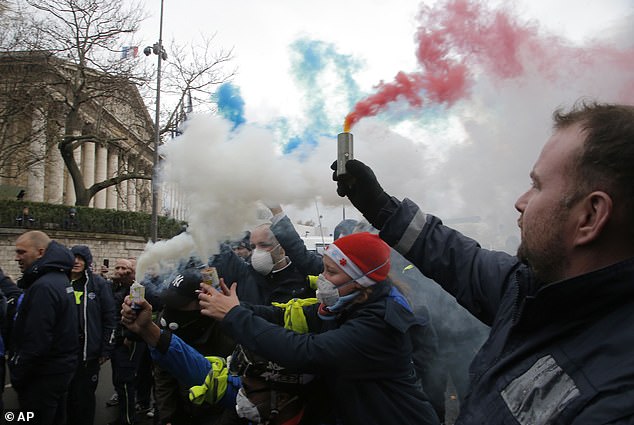 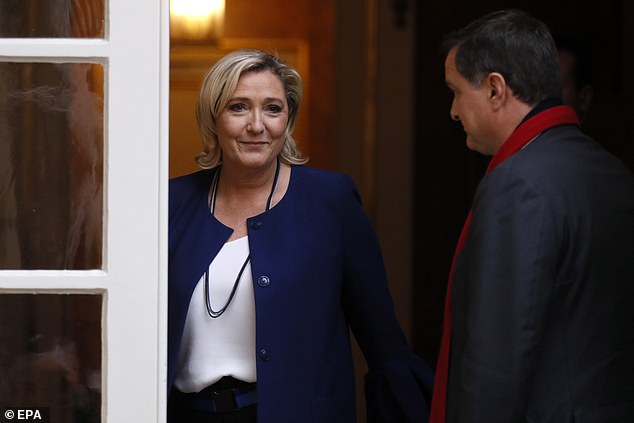 ‘It’s a first step, but we don’t want crumbs,’ said Benjamin Cauchy, a spokesman for the movement, which takes its name from the high visibility yellow jackets that all motorists are expected to own in France.

‘Demonstrations will continue as we fight for further demands,’ said Mr Cauchy. He added that he had received ’30 death threats’ after pleading for his movement to halt its campaign of violence.

There were more than 400 arrests in Paris at the weekend, as thousands fought running battles with riot police.

Yellow Vest demonstrators were joined by sympathisers from the far-Right and the ulta-Left, as the anarchy lasted at least 12 hours.

National monuments including the Arc de Triomphe were sacked and other buildings were burnt out as looters stole thousands of pounds worth of goods from high-end boutiques around the Champs Elysee, and from bars and chemists.

There were calls for a State of Emergency to be announced, and for the Army to take to the streets, as some 4500 police in Paris at times lost all control of the streets.

Despite this, Mr Macron has pledged to carry on with his policy of increasing the price of petrol and diesel, in line with the Paris Climate Change agreement.

He had said there would be ‘no possibility whatsoever’ of his government backing down in the face of disturbances, but now he joins a long list of French presidents who have bowed down to rioters. 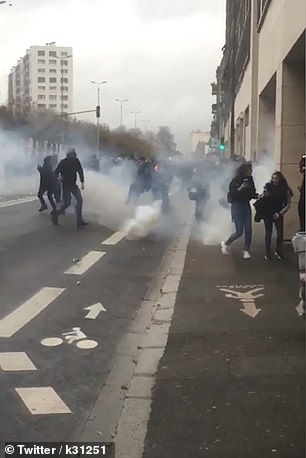 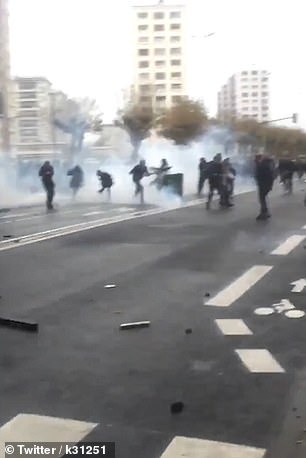 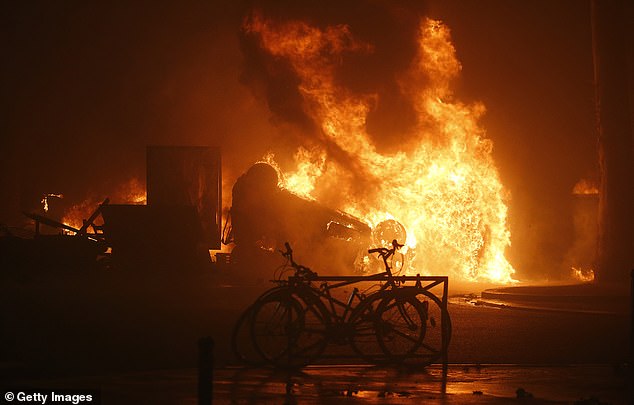 An overturned car burns in flames during the protests in Paris on Saturday, which grew into one of France’s worst urban riots 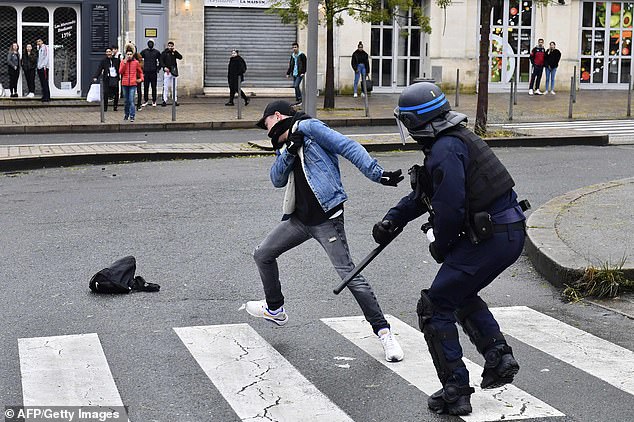 Violence: A high school student clashes with a riot police officer in Bordeaux, southwestern France, while protesting the education reforms which will see some university apply admissions criteria

Conservative leaders Jacques Chirac and Nicolas Sarkozy were notorious for withdrawing unpopular policies because of street disturbances, as were their Socialist counterparts.

The Yellow Vests movements has widespread support across France after developing into an anti-establishment campaign.

The current spate of violence is considered the worst since the Spring of 1968, when President Charles de Gaulle’s government feared a full-blown revolution.

Meanwhile, President Emmanuel Macron and Philippe’s approval ratings have hit new lows as the protests gathered pace, according to an Ifop-Fiducial poll for Paris Match and Sud Radio published on Tuesday.

Macron’s approval rating fell to 23 per cent in the poll conducted late last week, down six points on the previous month. Philippe’s rating fell 10 points to 26 per cent.

The president’s score matches the low charted by his predecessor Francois Hollande in late 2013, according to Paris Match. Hollande was then considered to be the least popular leader in modern French history. 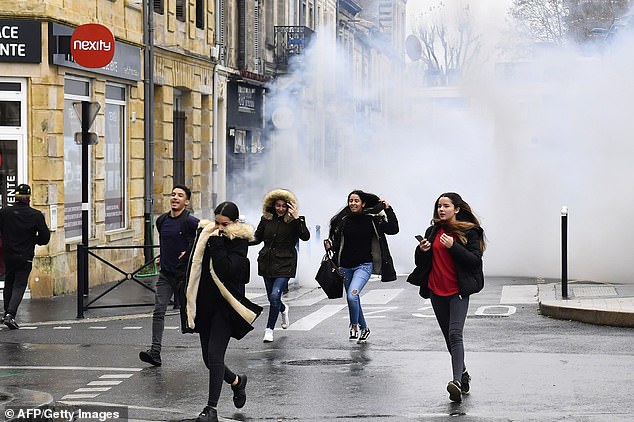 No kid gloves: High school students run away from tear gas during a demonstration in Bordeaux, southwestern France, as thousands of teenagers stage blockades and walk-outs across the country

The first ‘yellow vest’ demonstrations were held on November 17 to contest fuel-tax rises, and have since evolved into a broader protest movement and anti-Macron uprising.

It continued yesterday with riot police using tear gas to quell high school student protests across France.  One shocking video showed police firing smoke grenades at teenagers who kicked them back at officers as violence escalated.

Another showed teenagers fleeing from police tear gas in Orleans while cars were set on fire outside a high school in the Paris suburb of Aubervilliers, where seven students were arrested following a walk-out.

Around 1,000 pupils, many wearing high-vis vests, demonstrated in the city of Nice, and photographs from another student protest in Bordeaux appear to show riot police using batons against teenagers.

Hundreds of schools across the country were totally or partially blocked by students piggybacking on the ‘yellow vest’ demonstrations to air frustration over new university entrance requirements.

President Macron’s government want universities to be able to apply admissions criteria and select students on merits such as exam results or entrance exams for some oversubscribed degrees.