A rally called to promote free speech and denounce big tech censorship turned ugly Saturday in San Francisco, when hundreds of alleged Antifa counterprotesters showed up and berated and attacked demonstrators, leaving one missing a tooth.

The conservative group Team Save America organized the event to protest Twitter, which it argues censors free speech. They planned to rally at United Nations Plaza before moving the protest to Twitter's headquarters a few blocks away. But the event quickly devolved into a shouting match and violence as hundreds of counterprotesters stormed the scene.

Video shows one counterprotester punching Philip Anderson, an organizer of the event, knocking one of his teeth out.

Anderson posted a picture of the aftermath on social media and said he was attacked by Antifa. 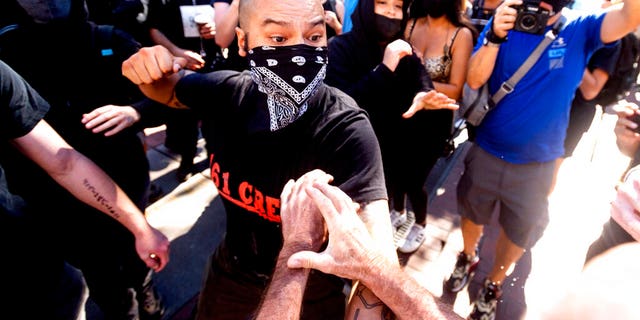 A counter-protester, who declined to give his name, prepares to hit a conservative free speech rally organizer in San Francisco on Saturday, Oct. 17, 2020. About a dozen pro-Trump demonstrators were met by several hundred counter-protesters as they tried to rally. (AP Photo/Noah Berger)

The event was canceled before it ever really got started.

Another protester who was wearing a Trump 2020 shirt was attacked at some point by a counterprotester. 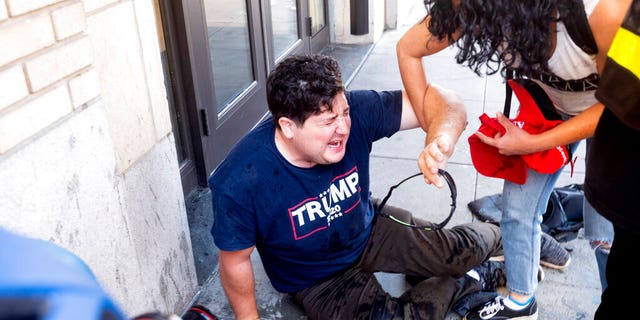 A supporter of President Donald Trump lies on the ground after he was attacked by counterprotesters in San Francisco, Saturday, Oct. 17, 2020. About a dozen pro-Trump demonstrators were met by several hundred counterprotesters as they tried to rally. (AP Photo/Noah Berger) 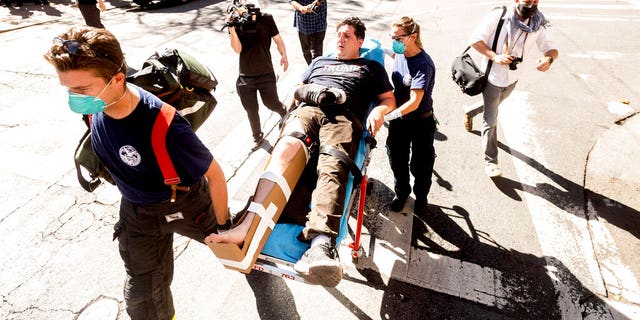 Medics transport a supporter of President Donald Trump to an ambulance after he was attacked by counter-protesters in San Francisco on Saturday, Oct. 17, 2020. About a dozen pro-Trump demonstrators were met by several hundred counter-protesters as they tried to rally. (AP Photo/Noah Berger)

The San Francisco Police Department did not respond to a request for comment Saturday.

Social media companies have come under fire for alleged censorship recently. Last week, for instance, Twitter put a warning on a tweet from the President that compared coronavirus to the flu, while Facebook removed the post altogether.

As of Saturday evening, Twitter had still locked out the New York Post's account for tweeting about their reporting on Joe Biden's son, Hunter Biden.

Facebook, meanwhile, said it is reducing distribution of the Post's reporting on its platform.