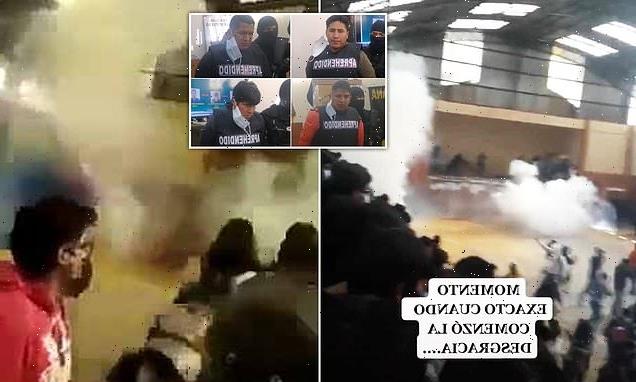 Four students were killed in a stampede after a tear gas grenade was set off during the middle of an assembly inside a university arena in Bolivia.

Authorities said 83 students were injured as they attempted to flee the building at Tomas Frías Autonomous University in the mountainous city of Potosí on Monday.

Potosí prosecutor Roxana Choque told reporters that the students’ deaths was caused by asphyxiation due to the inhalation of gas.

As of Tuesday, the only victim identified was Raisa Vania Colque, a 23-year-old civil engineering major. 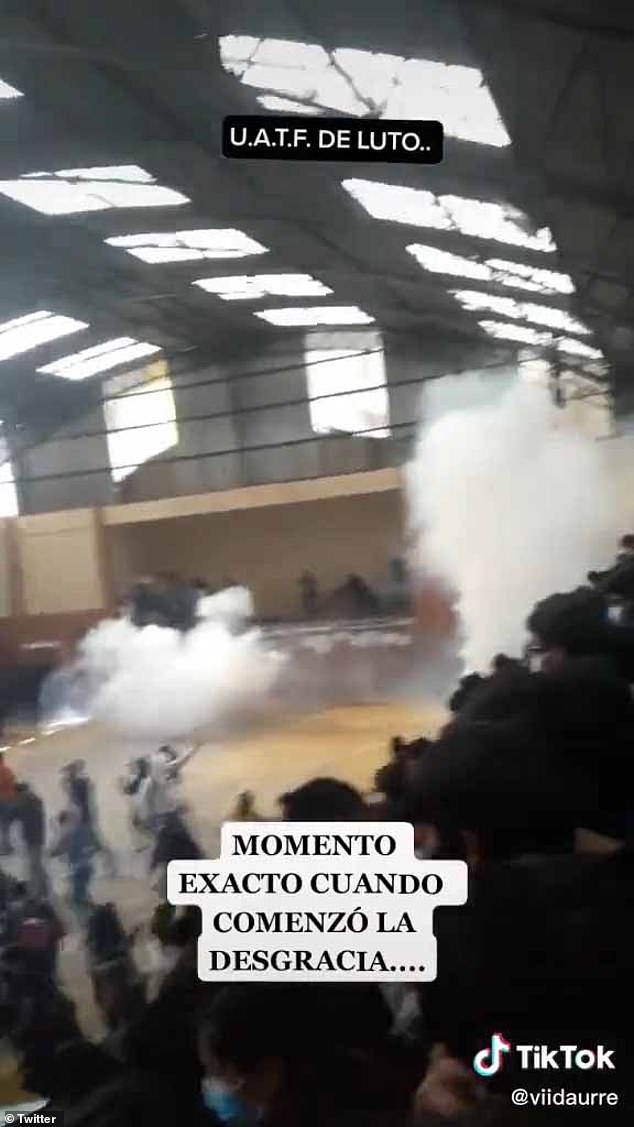 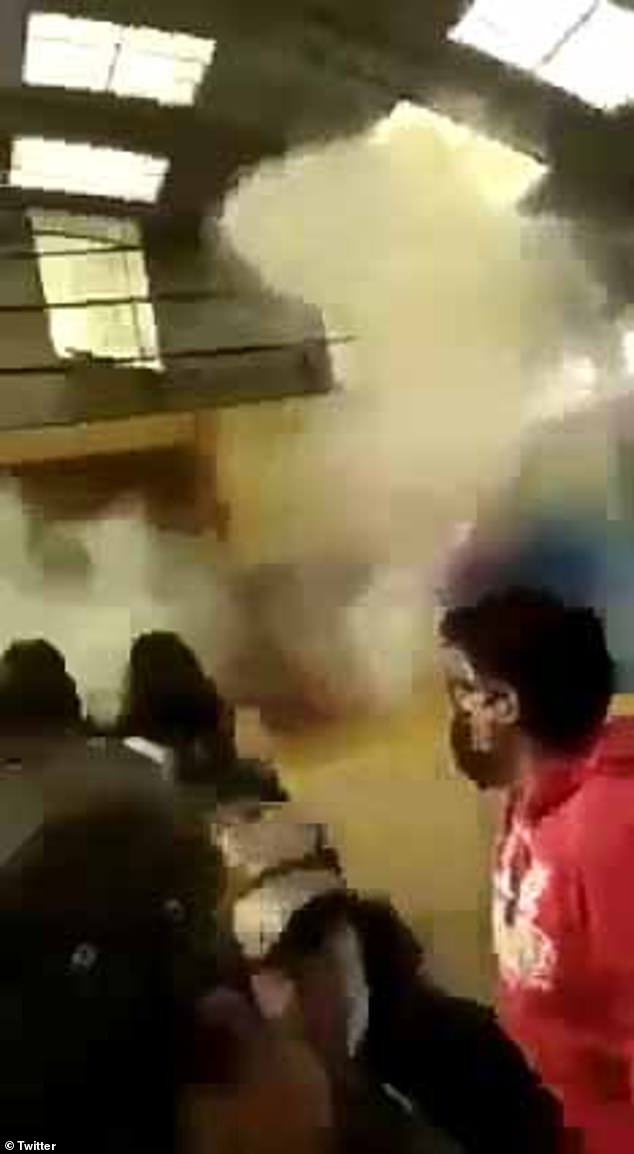 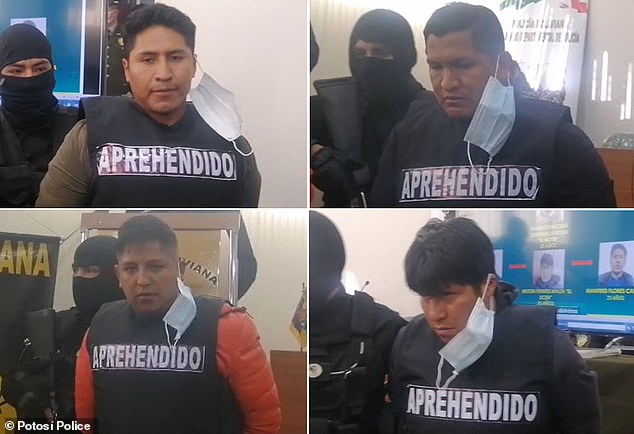 Manfred Flores (top left), Ariel Quispe (top right), Mauricio Quintanilla (bottom left) and Milton Fuentes (bottom right) were taken into custody Monday in connection to their roles in the stampede that left four students dead and 83 others injured at Tomas Frías Autonomous University in Bolivia. Authorities say Flores tossed a gas grenade into the crown during the assembly that was held to elect new student body leaders

‘In the middle of the assembly, a tear gas grenade was detonated, which created a stampede,’ he said. ‘Many students were trampled.’

Police took four suspects into custody after the incident, including Manfred Flores, 25, who was identified as having tossed the grenade into the crowded hall.

‘He is the person who had launched this artifact,’ a Potosí police chief said Tuesday after the defendants were paraded before the press.

‘We are awaiting for the expert opinion regarding the gunpowder in the hands of this device in the hand of this citizen to confirm the actions of this person.’ 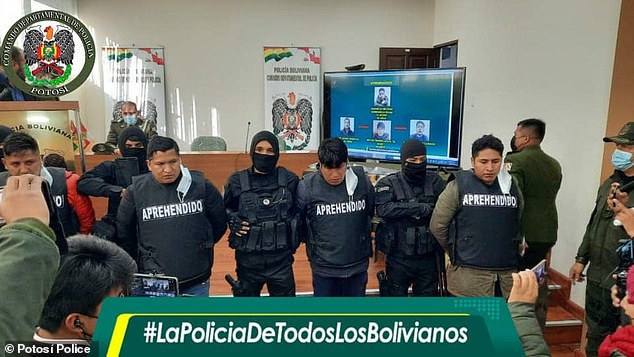 The Bolivian police paraded Mauricio Quintanilla, Ariel Quispe, Milton Fuentes and Manfred Flores before the press Tuesday, a day after they were arrested for their role in a stampede that left four students dead and 83 others injured 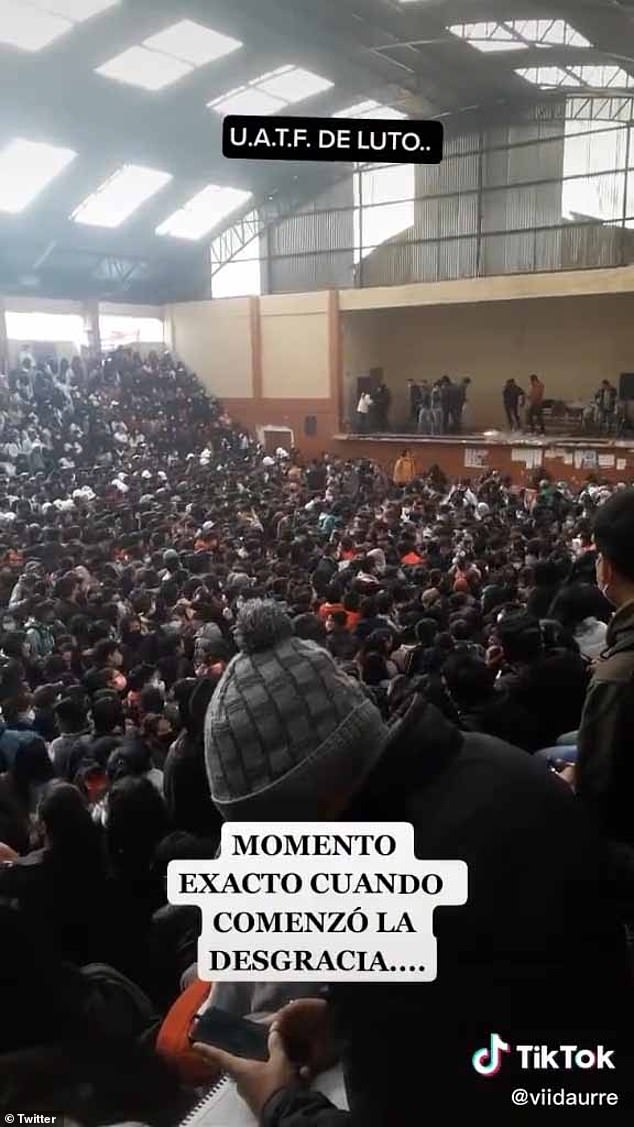 Mauricio Quintanilla, Ariel Quispe, Milton Fuentes and Manfred Flores have been arrested by Bolivian authorities for their role in the stampede that killed four students and injured 83 others during an assembly at Tomas Frías Autonomous University on Monday

Flores, Mauricio Quintanilla, 25; Milton Fuentes, 35; and Ariel Quispe, 40, are being investigated for homicide and possession of a gas grenade.

Quintanilla holds the executive secretary position for business administration department’s student union and was ‘mainly responsible for the events.’

Mendoza, the president of the electoral committee, organized the assembly.

Investigators learned the four defendants obtained the grenade early Monday and were looking into how they obtained it.

Bolivian police commander general Jhonny Aguilera revealed that four suspects met together Monday around 1am and were in Quispe’s car when the grenade was placed in a backpack that was brought into the gym before it was thrown into the crowd.

It’s unknown if any of the suspects has a family member who is a member of the police force or in the military, and may have provided one them the gas grenade.

‘It is not easy (to find the gas grenade for sale), it is not for private use,’ a police official said, as quoted by La Razón. ‘We are investigating to determine who has sold (that device).’