Four Britons had to be rescued by stunned locals after driving their car into a canal in Amsterdam.

Police suspect they may have been taking laughing gas before the incident.

The Brits drove into the Oudezijds Voorburgwal canal in the red-light district of the Dutch capital Amsterdam at around 9.30pm on August 9. 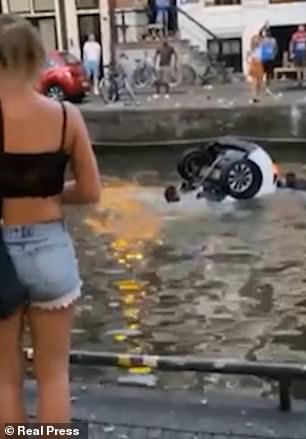 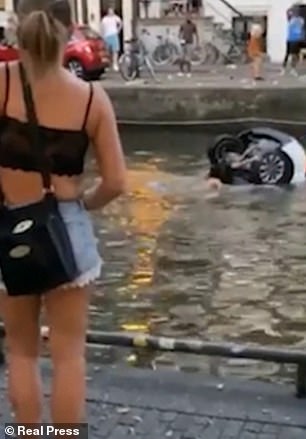 The group of four was helped out of the canal by stunned bystanders while fire brigade divers managed to lift the vehicle out of the water by around 10.45pm.

In the video, the back of the car is seen above the water surface as some of the occupants try to climb on for support.

A short time later, the entire car has disappeared and several men appear to be struggling in the water when an onlooker in a black top jumps into the canal to help.

The police said that eight or nine people jumped into the canal to help the Brits.

Some local residents said they saw the British group smoking cannabis and taking nitrous oxide, commonly known as laughing gas, before the incident.

One witness told local TV station AT5: ‘I saw the police removing the empty laughing gas containers from the wreckage. They’d been in the car for several hours before. One of them nearly drowned because he was so high.’ 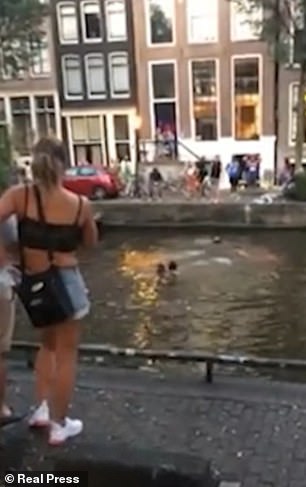 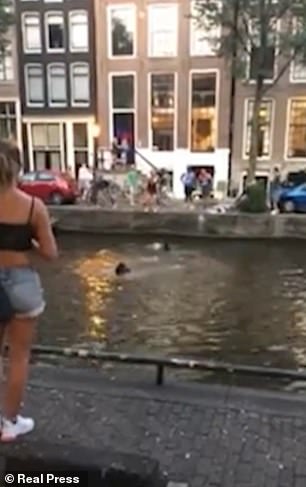 A short time later, the entire car has disappeared and several men appear to be struggling in the water (left and right)

However, another witness reported by online newspaper NU said that one of them appeared to not be able to swim well ‘and was completely stressed’.

The struggling Brit reportedly made it so hard for his rescuer to help that he ended up dragging the person underwater as well.

While three escaped from the car by themselves, bystanders had to rescue the fourth who was still stuck inside.

It is unclear if the Brits are being investigated by the local authorities over the incident.

There have been no updates on the condition of those involved.