A former Camberwell Grammar teacher will be released from prison after his convictions for sexually assaulting boys were quashed on appeal.

Trevor Spurritt was jailed last February after he was found guilty by a County Court jury of indecently assaulting four boys between 1969 and 1971, when they were aged between 12 and 14. 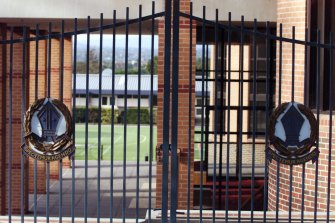 But on Friday the Court of Appeal set aside the convictions on nine charges and ordered Mr Spurritt be acquitted on all charges. The 77-year-old watched the hearing from prison via a video link and is expected to be released later on Friday.

Court of Appeal judges David Beach, Stephen Kaye and Richard Niall found the jury’s guilty verdicts were unreasonable on some charges and ruled a substantial miscarriage of justice had occurred in the jury convicting Mr Spurritt on other charges.

Mr Spurritt was alleged to have indecently assaulted boys in a classroom and on school camps. He denied any of it occurred.

The Court of Appeal quashed the convictions on the classroom offending as it found there was a contradiction in the evidence of the complainant and his friend, who was seated next to him and said to be a witness. The friend told the trial he never witnessed anything untoward during his time at the school.

The court found an allegation made by another complainant, that he was indecently assaulted near the teacher’s desk and in full view of the class, improbable and unlikely as no one else saw the alleged offending.

The appeals court also found it was unreasonable for the jury to have been satisfied beyond a reasonable doubt on the charges stemming from alleged offending at school camps.

One complainant alleged he was indecently assaulted at a week-long camp in either 1969, 1970 or 1971, but the trial heard there were no such camps in the first two years and that Mr Spurritt did not attend the 1971 camp.

The appeals judges found there were discrepancies in the evidence of another complainant who alleged he was indecently assaulted in a mess hut, and that of other witnesses; and that another’s evidence was confusing and inconsistent, which led to problems with his reliability and credibility.

The Court of Appeal quashed the convictions on nine charges and acquitted Mr Spurritt on all of them. It considered ordering a retrial on three charges, but decided it would not be just or appropriate given the former teacher had served almost 12 months in prison.

Judge Riddell in 2019 ordered the jury find the former teacher not guilty on three other charges, related to a fifth former student.