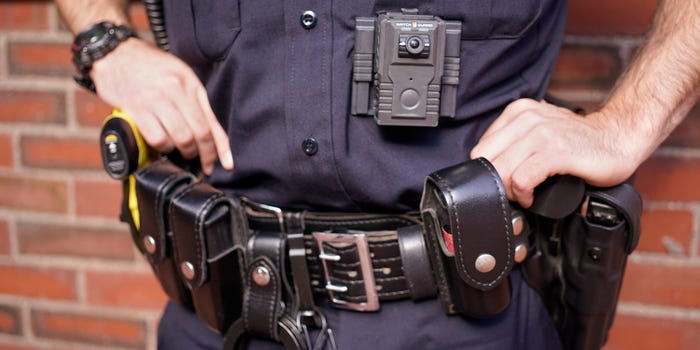 After the raid at the Tallahassee home of fired COVID-19 data scientist Rebekah Jones, the Florida Department of Law Enforcement has released bodycam footage of the incident.

Two separate videos were released by FDLE on Vimeo.  "Other than redactions, the video has not been edited," according to FDLE. "Please note the camera shuts off briefly at 8:32:55 and starts again at 8:32:56, although there is no audio for approximately 20 seconds as the camera restarts. Due to this one-second interruption, the video is split into two files."

The first video runs about 7 minutes and features officers gathering by Jones' door, knocking several times and making an initial ask for her to come outside. It is unclear from the video when the officers arrived at her home.

In a statement earlier this week, FDLE spokeswoman Gretl Plessinger stated that Jones opened her door to officers 23 minutes after their arrival. FDLE said that they arrived on site at 8:26 a.m. local time on Monday morning.

In the second video, more officers appear to be called as the officers on site attempt to open the door, calling Jones down again. Eventually, an officer tries to call Jones, revealing her phone number, and another officer approaches the door with a sledgehammer.

As Jones approaches the door, an officer can be seen pointing a gun with a flashlight through a window, where Jones audibly reacts from inside. At the 15 minute mark, Jones opens the door with her hands up and says that an officer pointed a gun at her face.

As the officers apprehend Jones and enter her home, they enter, guns drawn, and ask who is inside, which Jones responds that her husband and kids are upstairs.

Jones' husband and young children step outside as officers blame Jones for not opening the door quickly enough and tell her that they have a search warrant.

"This video demonstrates that FDLE agents exercised extreme patience," Commissioner Rick Swearingen said in a statement along with the video's release.

In the statement, Swearingen also claimed that "the media should also demand Ms. Jones release the entirety of the video she recorded while agents were present in her home." Jones has claimed that the FDLE seized the video camera in her home that recorded footage of the incident, of which a snippet is posted to Twitter. FDLE has denied seizing the video camera. Jones' video amassed more than 6 million views.

"Agents afforded Ms. Jones ample time to come to the door and resolve this matter in a civil and professional manner. As this video will demonstrate, any risk or danger to Ms. Jones or her family was the result of her actions," Swearingen said. The commissioner also denied that agents pointed their guns at her face or at her children.

The search warrant and investigation into Jones followed a Department of Health complaint that an individual allegedly hacked into the state's emergency alert system, which Jones has denied.

On Twitter, Jones responded directly to the FDLE's new footage. On Twitter, Jones said that FDLE "waited about 13 minutes outside while I got dressed, and were ready to break my door down with a sledgehammer."

Jones added that the second video "also shows me coming out with my arms up, cooperating, with my husband coming down the stairs with my two year old in his arms," adding that, "My video from inside showed them pointing the guns right at them. This is 'restraint?' Really???"

Jones and her lawyer did not respond to a request for comment.

In May, Jones, who was instrumental in designing Florida's COVID-19 dashboard, was fired after she claimed she refused to manipulate data to support Gov. Ron DeSantis' plans to reopen the state.

On Wednesday, Ron DeSantis' office emailed a statement to Bay News 9, which said, "Evidence is abundantly clear that the governor had no knowledge of this investigation until 5 o'clock like everyone else. This is an independent law enforcement investigation, and the Governor will respect the legal process and let it play out."

After Jones' video of the raid gained national attention this week, Ron Filipkowski, a Republican attorney appointed by DeSantis with authority to nominate judges, resigned after the raid on Jones' house. On Twitter, Filipkowski shared his resignation letter, calling the action "unconscionable."

In an interview with the Sarasota Herald-Tribune, Filipkowski said, "You don't send 12 armed officers to raid her computer for doing that. That's Gestapo. That's authoritarian dictator tactics. That's not America. It really viscerally bothered me."