Speaking at a daily media briefing in Wellington, Director-General of Health Dr Ashley Bloomfield stressed that although the numbers were rising, they weren’t out of control. 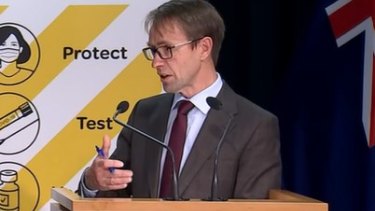 Director-General of Health Dr Ashley Bloomfield said fighting the Delta variant is like a different virus.

“And we’re also seeing that the vast majority are in Auckland, with the Wellington-based ones linked to [existing] cases,” he said.

The majority of the cases were among people of Samoan ethnicity which was a “reflection of the largest sub-cluster” of the outbreak linked to a church in Auckland, the chief health official said.

Bloomfield said he spoke with Australia’s Department of Health Secretary Professor Brendan Murphy on Monday about the nature of the Delta variant. He agreed with Murphy that “combating Delta in the community is like dealing with a whole new virus”.

“That is our experience in New Zealand, too.

“Delta is unlike our previous experience, it is, as we know, highly infectious and transmissible, and as we have seen, spreads rapidly.“

The outbreak began with one case detected a week ago in Auckland. Genome sequencing linked that case to a case in a traveller in quarantine. The NZ traveller had returned from Sydney, prompting Prime Minister Jacinda Ardern to say the outbreak had originated in NSW.

On Monday, health authorities revealed 35 new cases of COVID-19 in the community.

Ardern has extended a national lockdown until Friday when it will be reviewed, except for Auckland where stay-at-home orders will remain in place until August 31 at a minimum.

“We are still very much in the thick of this outbreak,” said Ardern on Monday.

“We don’t yet believe we’ve reached the peak of this outbreak or necessarily the edges of it.”