Face off! Father ties on a photo of his baby’s mother’s face to feed his infant son

A father from China came up with an ingenious way to encourage his baby son to feed from a bottle.

In a hilarious clip, recorded in Wuyuan County of Jiangxi province, in China, a father ties a picture of the baby’s mother to the front of his own face.

A smart tablet is suspended in front of the man’s face, with two transparent wrapped round behind his head keeping the device in place. 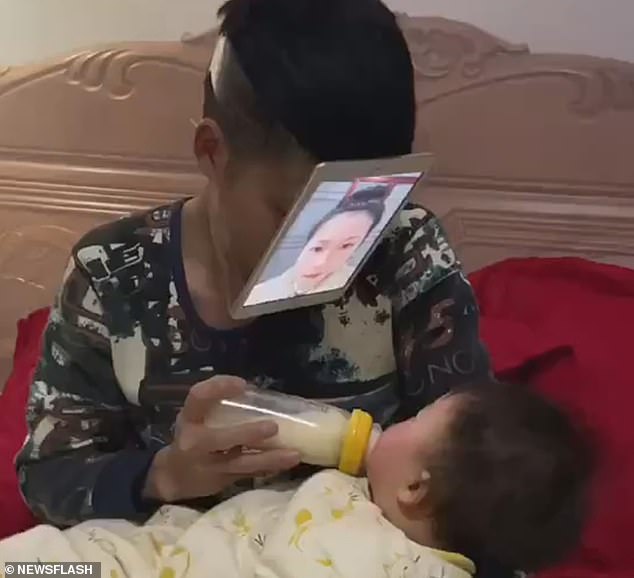 A father, from Wuyuan County of Jiangxi province, in China, taped a smart tablet onto the front of his own face, displaying a photograph of his baby’s mother in an attempt to make the baby feed from a bottle

The man’s son is seen happily drinking from a milk bottle being held in front of their face.

The baby even holds out one hand and attempts to reach out and grab their mother, believing the picture to be their real parent.

The video clip was originally filmed on December 27th at the family’s home.

The man thought up the clever feeding solution when his child refused to feed.

He realised that his baby wanted their mother to be around before beginning to feed from the bottle.

One person on social media responded by saying that it’s no surprise the man’s hack worked because a mother-baby bond is strengthened by breastfeeding.

This means it is more likely for the baby to want their mother around when feeding.

However, another person responded to the video by suggesting that the tablet screen was too close to the baby’s own face and could cause harm to their eyes.