Even the octopuses try to kill you in Australia! Father is seriously ill after he touched the world’s most deadly marine animal which was hidden in a shell given to him by his daughter 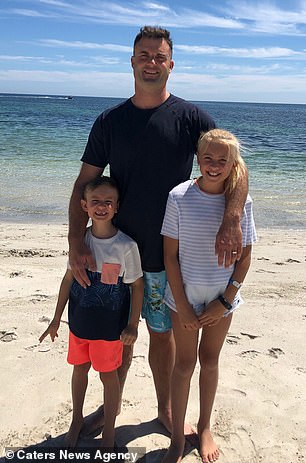 Aaron Pix (center) and his kids Will and Sophie

A father-of-two became seriously ill after coming into contact with the world’s deadliest marine animal on a Christmas Eve trip to the beach in Australia.

Aaron Pix, 42, was rushed to hospital for treatment after a blue-ringed octopus was found in his pocket – having crawled out of a shell given to him by his 11-year-old daughter Sophie.

Perth youngster Sophie was swimming at a on Western Australia’s south-west coast with her younger brother Will, seven, on Monday when she found the shell.

She decided to keep the shell and gave it to her dad Aaron who put it in his pocket.

Mr Pix didn’t discover the octopus until he was cleaning out the shell when they returned home from the beach.

He became unwell and was rushed to hospital after his leg came in contact with the tentacles of the world’s most venomous marine animal hidden inside his pocket.

‘Sophie had picked up this shell and was swimming with it and in so many ways this could have turned out to be disastrous,’ Mr Pix told Perth Now. 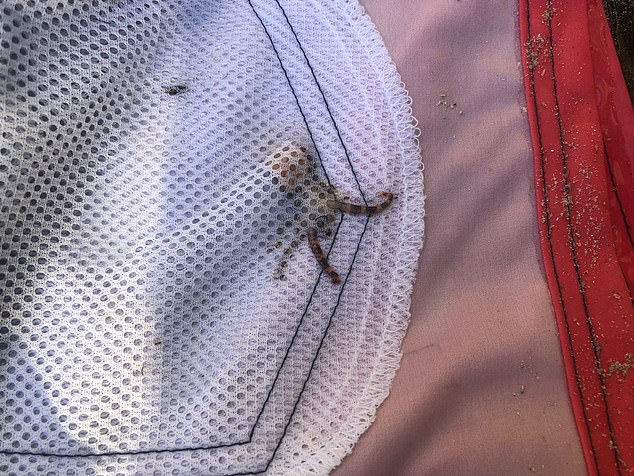 Mr Pix was given the shell by daughter Sophie, 11, and put it in his pocket. Pictured: The deadly octopus in the pocket of his swimming trunks

‘It is pretty scary to think I could have been bitten and died in front of my kids on Christmas Eve.

Mr Pix spent three hours under observation in hospital before he was given the all clear.

He regards himself as very lucky.

‘It makes you think there must be more of them out there and it’s the sheer lack of awareness that worries me now,’ he told Perth Now. 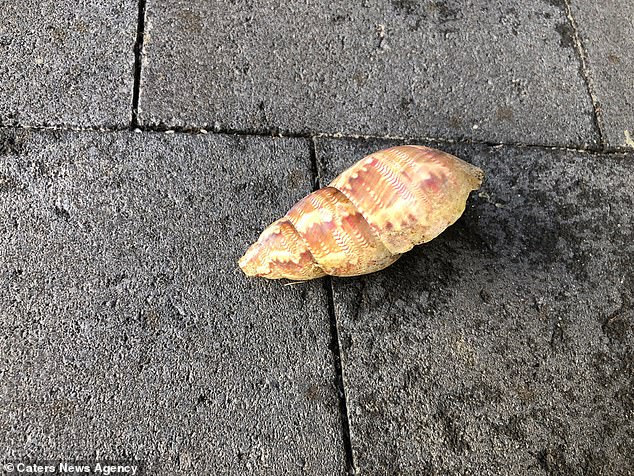 The latest incident has prompted beachgoers to be vigilant.

Found in tide pools and coral reefs, blue-ringed octopuses can be identified by their yellowish skin and characteristic blue and black rings that change color dramatically when threatened.

They are relatively docile but they are dangerous to humans if provoked and handled because of their deadly venom.

One bite can produce enough enough venom to kill 26 people and are often painless, with many victims not realising they have been bitten until they are struck down with paralysis. 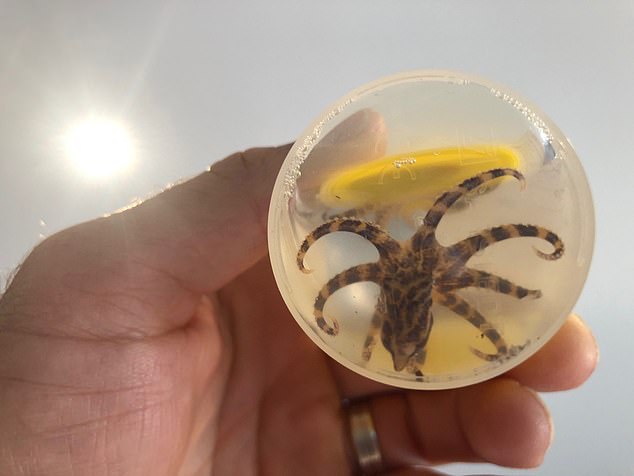 Pictured: the Octopus after it was removed from Mr Pix’s skin following a trip to hospital