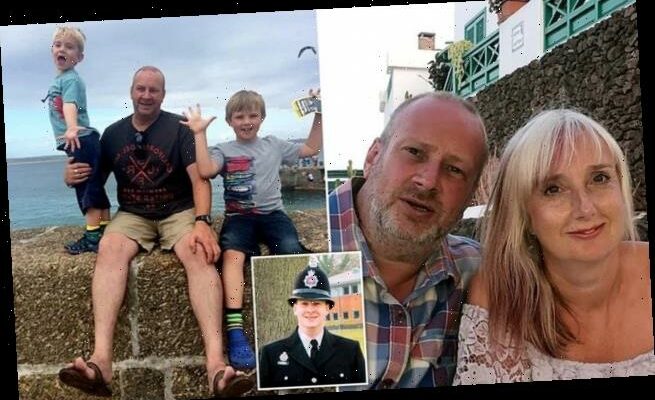 A ‘hero’ frontline policeman has become the second officer in Manchester to die within a month of testing positive for Covid.

PC Jonathan Wain, 49, was described as a ‘true gentleman’ and ‘irreplaceable’ by colleagues who worked with him in Bury.

PC Wain, affectionately known as ‘the Duke’, had served with Greater Manchester Police since 2003.

He died on Monday, leaving behind a partner and young sons.

Friend and colleague PC Keith Redmond said: ‘We are all stunned that he’s gone and we’re all going to miss that smile’.

Mayor of Greater Manchester Andy Burnham said: ‘My sincere condolences to PC Wain’s family. We are deeply grateful for Jonathan’s service to our communities and thinking of you all at this time. ‘

PC Wain is the second officer with GMP to die within a month after testing positive for Covid. 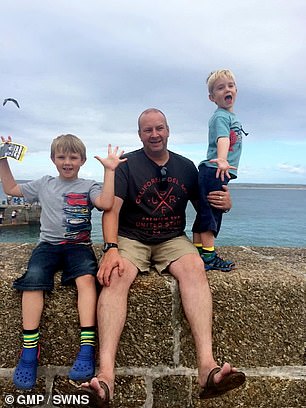 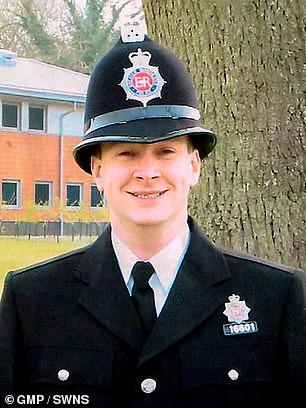 PC Jonathan Wain (pictured left with his sons), 49, was described as a ‘true gentleman’ and ‘irreplaceable’ by colleagues who worked with him in Bury. PC Wain, affectionately known as ‘the Duke’, had served with Greater Manchester Police since 2003

Police constable Abbasuddin Ahmed, 40, was a serving officer on the Trafford district for Greater Manchester Police. He died in hospital In January, having tested positive for the virus in December, the force said.

Police officers have been told they can get vaccinated at health centres with spare capacity – but must wear plain clothes so as not to draw attention to themselves.

Force leaders were said to have felt ‘betrayed’ when Health Secretary Matt Hancock announced this week that frontline officers may have to wait months for jabs.

But the Mail has learnt of an arrangement with the NHS that lets police receive a vaccine if there is spare capacity at a centre and the jab would otherwise go to waste.

In an internal memo, staff are advised that they cannot be seen to receive preferential treatment that would contradict the Government’s decision not to prioritise police.

It also emerged that some officers have sidestepped even this discreet arrangement by booking jabs through services meant for NHS staff.

It comes after Scotland Yard said last month that five Met officers had died with Covid in little more than a fortnight.

A custody sergeant, three constables and a traffic police community officer died between January 11 and January 26.

Met Police bosses circulated the jabs memo after officers shared a link on WhatsApp that allowed them to ignore the agreed protocols and book in for vaccinations at Hillingdon Hospital in west London, via a link originally intended for health workers.

Officers were urged not to use the link but if they had already booked an appointment then they should ‘still attend but in plainclothes or a plainclothes jacket and not in marked vehicles’.

The same dress code advice is given for officers who manage to book a spare vaccine at a health centre.

Following PC Wain’s death, a spokesman for Greater Manchester Police said: ‘He was passionate about being a police officer and doing a good job; that was who he was and he was proud of it.

‘He was a true gentleman and a man that is fondly remembered by all who have worked with him throughout his service. There is not a bad word to be said about Jon.

‘On his current response team, he quickly became loved and highly respected and he was that go-to guy for many of the young in-service officers, which is a testament to his quick wit, knowledge and approachability.

‘He wouldn’t watch anyone struggle, as it wasn’t in him to do so.

‘To the response team he is irreplaceable. He will be in our thoughts and hearts forever and we will try to do him proud throughout our careers.’

Inspector Carl Peterson, said: ‘I first met Jon in 2014 when I joined the Bury district and I have since had the privilege of Jon being a member of my team for the past two years.

‘With 17 years’ service, Jon was one of the most experienced members of the team who the younger officers could turn to for advice.

‘During his career, Jon experienced numerous changes and challenges within the service, some good and some bad, but he approached them all professionally and was always there to support his fellow officers.

‘He would also be the first to volunteer for those incidents that require greater levels of compassion and patience.

‘Jon just had a way of helping people through what, for some, would be the most difficult times in their lives.

‘I think that is what people will remember most, Jon’s compassion and his cheeky wry smile. He will be missed by all that knew him.’

Chief Inspector Mike Brennan said: ‘We are all truly saddened to have learnt of Jon’s death on Monday evening.

‘Jon was very much a true gentleman and a valued member of the team at Bury.

‘He was everything that a police officer should be and more, and we are proud to have called him a friend, a colleague and a brother in blue. He will be missed so terribly by all.’

A fundraising page has been set up in aid of his partner Gaynor and two sons.

The other officer, Police Constable Abbasuddin Ahmed, known as Abbas or Abs, joined GMP in March 2017 but had been away from the front line during the pandemic, instead working from home ‘to look after his health’. 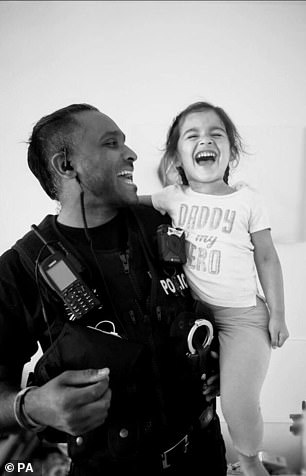 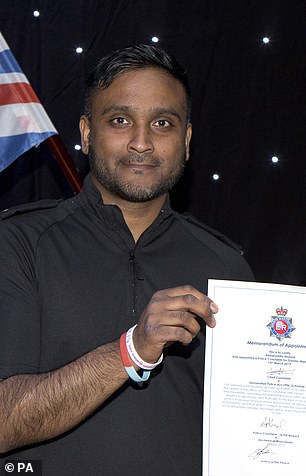 Tributes have been paid to ‘completely fearless’ police officer and father-of-two PC Abbasuddin Ahmed, 40, (pictured) who died after testing positive for Covid-19 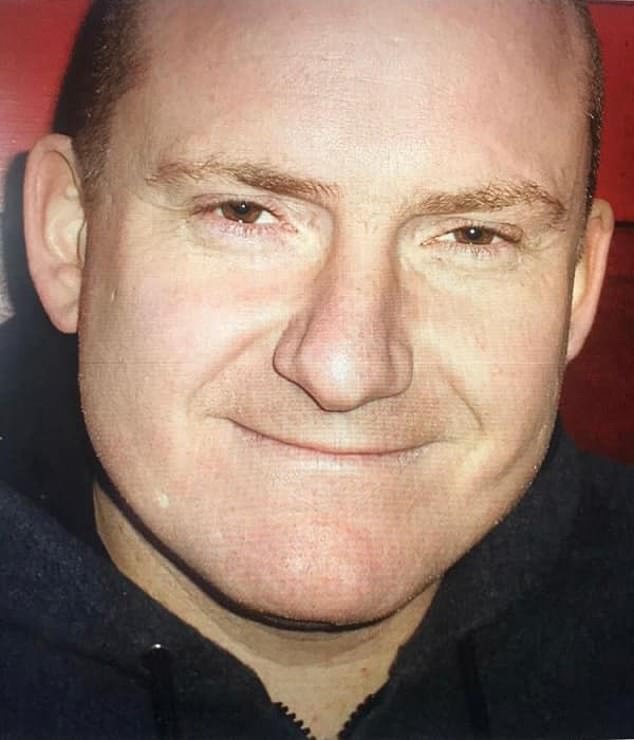 The force said the officer was described by colleagues on the Stretford Response Team as ‘the greatest brother in and out of work’ and ‘such a lovely man who was never seen without a smile on his face’.

Another tribute, shared by the force, said he had ‘lived up to his name meaning ‘lion’ – brave, loyal, a fighter, protective, and completely fearless.

Ministers will be urged to vaccinate people by age and ethnicity rather than their job during the next phase of the coronavirus jab roll-out, it was claimed on Tuesday.

Number 10’s leading jab experts are expected to advise that the UK continues with its age-based approach after the nine most vulnerable groups are inoculated.

The Joint Committee on Vaccination and Immunisation (JCVI) will also urge ministers to prioritise some ethnic minority groups, who are at a disproportionate risk of dying from Covid, The Telegraph reports.

Members are said to be particularly concerned about mortality rates among South Asians, who studies have shown are twice as likely to succumb to the virus as their white peers.

Both Boris Johnson and Matt Hancock have previously said teachers, police officers, shop owners and other key workers could be bumped up the priority list once the top groups have been jabbed.

But JCVI sources suggested this week that prioritising people based on their occupation would ‘create too much complication’ and ‘risk slowing the roll-out down’.

‘Abs will live in our hearts forever.’

Inspector Abid Sardar, co-chair of the GMP Muslim Police Association, said: ‘I would describe him as a committed police officer, true friend and family man.

‘Abbas will be greatly missed by everyone that knew him.’

On Thursday it was revealed that an ‘extremely talented’ detective who had a thirty year career at the Metropolitan Police had died after testing positive for Covid-19.

Det Sgt Barker, who had worked at the Met since 1992, was classed as vulnerable, Scotland Yard said.

He been shielding from Covid but had continued to work on investigations from home during the pandemic.

He said: ‘He will be remembered fondly by everyone he worked with, and will be greatly missed by us all.

‘We are truly saddened by his loss and our thoughts are with his family and friends at this difficult time.’

Some have now called for officers to be prioritised in the Government’s vaccine rollout plan.

Jon Wain, 49, who had worked as a police constable in Bury for Greater Manchester Police for 17 years, passed away on Monday, February 15, leaving behind his partner, Gaynor, and two sons.

Nick Oldfield, 48, who worked as a police constable for Staffordshire Police for ten years, died in hospital on January 21, almost a month after contracting Covid-19.

He leaves behind his partner of 20 years Sarah and their three children aged ten, 15 and 18.

Speaking of Mr Wain on behalf of Greater Manchester Police Federation, his colleague Brett Grange said it had been an ‘honour’ to work with him.