Harrowing moment an off-duty junior doctor tried to save a hit-and-run victim, 24, after she was mown down by a ‘cowardly’ speeding driver

This is the heartbreaking moment paramedics battled for 40 minutes to try to save the life of a 24-year-old woman mowed down in a hit-and-run.

Emma Galton, 24, was crossing a road when Laurence Crossan, 28, ploughed into her – before speeding off, weaving through traffic and running red lights.

The victim, whose family said had her ‘whole life to look forward to’, was pronounced dead that same evening after being hit by the Ford Mondeo in Hulme, Manchester. 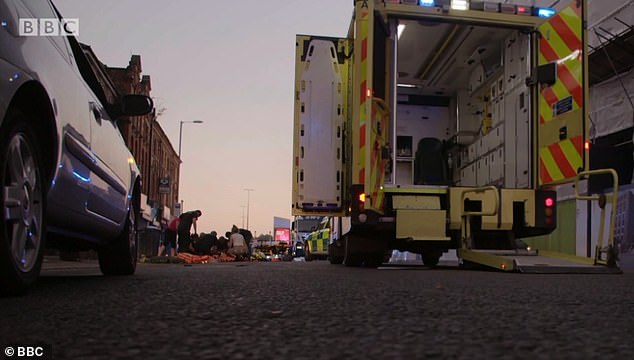 The moment that paramedics tried to save Emma Galton in Hulme, Manchester, at about 9.30pm on June 28 this year was shown on the BBC One documentary Ambulance last night

Crossan was jailed in September for seven years and four months after a hearing which saw Miss Galton’s father brand him a ‘coward’ who had devastated his life.

And the moment that paramedics tried to save her at about 9.30pm on June 28 this year was shown on the BBC One documentary Ambulance last night.

The programme showed the moment the first 999 call came in, with the caller saying: ‘It’s a hit and run. What should we do? She’s breathing’.

Paramedics Simon and Laura were sent to the scene with seven police cars and two other ambulances – and two off-duty doctors passing by also stopped to help.

After failing to save her, Simon held a debrief in the ambulance and insisted to the emergency team that they did all they could to try to help Miss Galton. 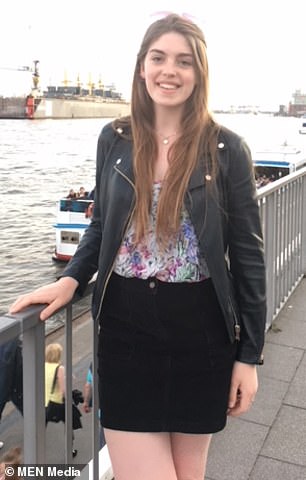 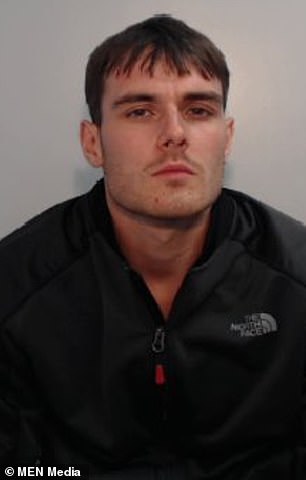 Emma Galton (left), 24, was crossing a road in Manchester when Laurence Crossan (right), 28, ploughed into her – before speeding off, weaving through traffic and running red lights

‘All you can do is make those last few moments as comfortable as you can – you hold their hand, put your hand on their forehead. That is something that does stay with you.’

Crossan has now been jailed for seven years and four months after a hearing which saw Miss Galton’s father brand him a ‘coward’ who had torn apart his family’s lives.

In September, Miss Galton’s father David said her death had left a ‘hole’ in the lives of her family, and their ‘shock and disbelief had been replaced with a slow acceptance’.

But he said they would ‘never truly come to terms’ with her death. Addressing Crossan directly, Mr Galton said: ‘Due to your reckless and selfish actions, my family has been changed irrecoverably. 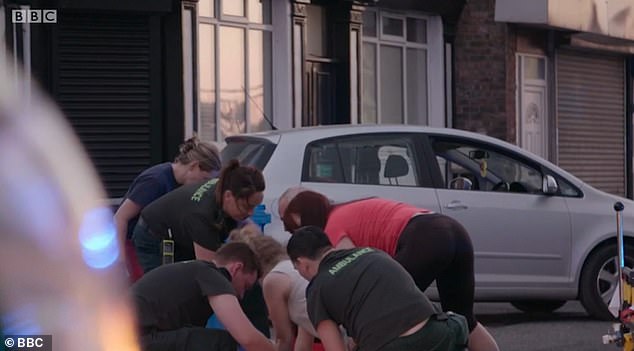 ‘That fact that upon hitting Emma, you carried on and showed no signs of slowing, let alone stopping, shows great cowardice and that your concern was only for your own welfare. I very much hope other families don’t have to go through what we have been made to go through.’

His daughter, who was originally from Bristol but had been living in Manchester after graduating from university, had been walking towards the city centre.

Manchester Crown Court heard Miss Galton stopped at the pelican crossing, opposite a parade of shops.

The court heard Crossan drove over two pavements, a grass verge and a cycle lane to get onto the main road near the roundabout, ‘forcing’ his way into traffic.

Charlotte Crangle, prosecuting, said cars heading towards the city centre stopped at the lights where she was starting to cross, but Crossan ‘showed no signs of braking or slowing down’.

Miss Galton was thrown into the air and came to rest 85ft (26m) further up the road. Crossan was estimated to have been driving between 34mph and 42mph on the 30mph stretch. 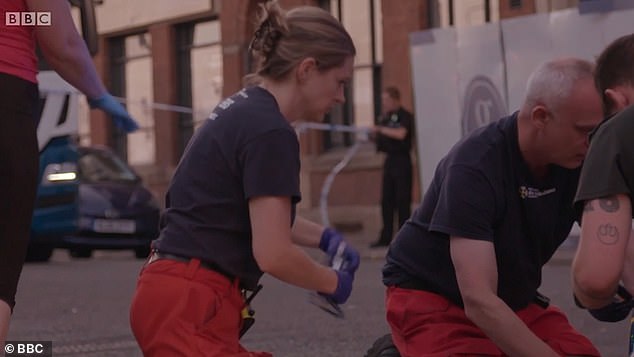 Bystanders raced to Miss Galton’s aid and used wheelie bins to cordon off the area before police and paramedics arrived. Despite extensive efforts to save her, she was declared dead upon arrival at hospital.

The court was told that after the horrific collision, Crossan showed a ‘total and cynical disregard for a woman who was seriously injured’ and sped off.

CCTV showed him undertaking and weaving through traffic and running red lights, including one close to a Tesco store in Stretford, where a couple had to step back out of the road to avoid being hit. 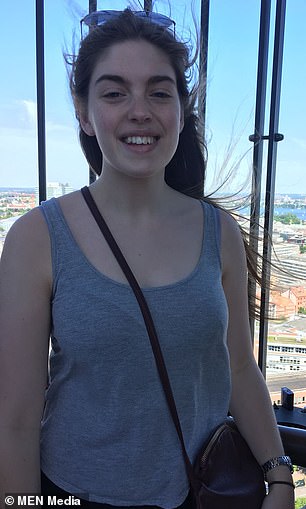 He eventually made his way onto the M60 driving to the Denton exit, abandoning the car close to where his ex-partner lived in Reddish, Stockport.

Police later visited the woman’s home and found the clothes Crossan had been wearing and the key to the Mondeo. But Crossan was nowhere to be seen.

He handed himself into police three days later, on July 1, but refused to help officers and gave no comment in interview.

A judge later said he had a ‘suspicion’ that Crossan, who has previous convictions for possession of heroin and cocaine, may have been under the influence of drink or drugs prior to the incidence, but said that there was no evidence to prove it.

Wearing a white T-shirt, he sat slumped in his seat in the dock as the facts of the case were read out.

He showed no emotion as The Recorder of Manchester Judge David Stockdale QC sent him down. 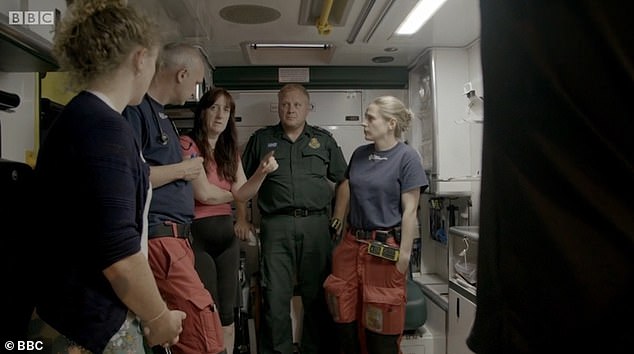 After failing to save her, Simon held a debrief in the ambulance and insisted to the emergency team that they did all they could to try to help Miss Galton

The court was told Miss Galton graduated with a degree in Spanish from Chester University and had secured a job at a translation agency in Sale, Trafford.

She dreamed of moving to Spain to teach English and ‘her whole life to look forward to’, the court heard.

Pat Buckley, defending, said Crossan had had an argument with his former girlfriend prior to getting in the car.

He said: ‘This was no joyriding or driving a stolen vehicle. He had a row, got into the car and drove in a way he had never driven before. He offers no excuse and accepts full responsibility for his actions.’

Mr Buckley insisted Crossan was remorseful and had been left in a ‘distressed state’ whilst on remand.

However, passing sentence, Judge Stockdale said no satisfactory explanation had been given for Crossan’s ‘appalling’ driving and said that his remorse had to be ‘tempered’ by the fact he had driven off and failed to co-operate with police.

He said: ‘Emma Galton was a happy, healthy young woman. A talented young linguist who had plans to go to Spain to teach English to children.

‘She had her whole life to look forward to. Nothing I say or no sentence I pass can turn the clock back or begin to recompense those people affected.

‘Your driving was appalling and was manifestly extremely dangerous. You failed to stop and drove dangerously again.

‘You showed a total and cynical disregard for the condition a young woman you knew must be seriously injured. You knew you had hit a pedestrian.

‘Why you drove as you did is scarcely explained. You said you saw a police car who may have had pursued you. But there was no police pursuit.

‘These courts are not naive and there remains a suspicion that you were intoxicated either through drugs, or through drink.’

Crossan will serve an extended five year driving ban once he is released from prison and will have to pass an extended re-test.

Inspector Danny Byrne of GMP’s Serious Collision Investigation Unit, said after the case that Crossan showed ‘absolutely no concern for Emma as he left her dying in the middle of the road’.

‘Rather than try to help Emma, he cared only for himself,’ he added.

‘Crossan fled the scene of the crime, abandoned the vehicle and went on the run, leaving behind a young woman with a promising life ahead of her.

‘No length of sentence can ever replace someone’s life, but I hope today’s result will bring some comfort to Emma’s grieving family knowing that Crossan has been brought to justice.

‘I also hope this case highlights that if you choose to drive dangerously and show no regard for the life and safety of others, we will do everything in our power to ensure you are held to account.’