A Facebook spokesman says a package that initially tested positive for Sarin at a mail facility near the company’s headquarters in California did not contain any dangerous substance.

‘Authorities have confirmed test results were negative for any potentially dangerous substance and the buildings have been cleared for re-population,’ spokesman Anthony Harrison said in a statement Tuesday.

Authorities put the Menlo Park site under quarantine Monday. Four buildings were evacuated. The suspicious package was delivered around 11am to one of the company’s mail rooms, Harrison said. 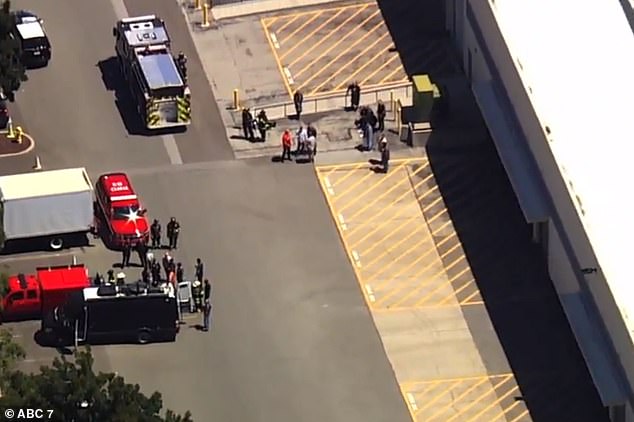 Possible traces of Sarin were thought detected in a mailing facility on Monday that is used by Facebook in Menlo Park. The facility was evacuated afterwards but no toxic material was found

The alarm was raised by a machine which detected a possible trace of the highly toxic compound during a routine check on Monday.

The machine conducted the test three times. Twice, it detected the highly toxic compound and the test came back negative once.

As a precaution, the building was evacuated.

Workers who handled the package did not report any ill effects.

There were no reports of injuries, Menlo Park Fire Marshal Jon Johnston said.

Facebook routinely checks all packages and had initiated a standard safety protocol, Johnston added, saying teams worked into the early hours of Tuesday to clear the scene.

Firefighters wearing hazmat suits were on site for several hours to ensure is was safe.

With 2.3 billion monthly active users and more than $55 billion in revenue in 2018, Facebook is massively popular around the world but also faces criticism for its control of personal information and has been subject to cyber attacks.

In December, it had a bomb threat at its main campus in Menlo Park that forced the evacuation of several buildings. No bomb was found.

Sarin is a highly dangerous nerve agent which can be deadly. It has been used as a weapon of war in the past, notably in Syria in 2017.