The timetable for Victoria’s extended COVID-19 lockdown will not be changed despite two local cases of “fleeting transmission” being reclassified as false positives.

Victorian authorities revealed late on Thursday that two cases of “stranger-to-stranger transmission” – the existence of which had been used to build the case for the extended lockdown – have been reclassified as false positives. 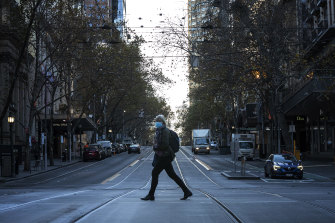 The two cases, which have both been reclassified, had been used to build the case for extending Melbourne’s lockdown.Credit:Daniel Pockett

Professor Bennett, who is chair of epidemiology at Deakin University, said the reclassifications were notable because the cases had clearly concerned health authorities.

“I think that’s going to be very reassuring for them given that this was a key area of concern,” she said.

Mr Merlino said that although the position on the lockdown timetable had not altered yet, the government constantly reviewed the position and it could alter if the situation changed.

“If we continue on a good track there is a chance that restrictions will be eased more quickly than we might otherwise have thought,” he said.

“My expectation is next week, I’ll be in a position based on public health advice to announce further easing in regional Victoria, and some careful easing of restrictions in Melbourne.”

The comments come as the state recorded four new local cases of COVID-19. 24,169 vaccine doses were administered, according to the health department tweet, and 49,439 test results were received.

The Victorian government has also secured a draft agreement with Prime Minister Scott Morrison to back a $200m quarantine facility near Avalon Airport but is concerned the terms could lead to a sharp increase in the numbers at the centre when the state would prefer a stronger focus on minimising risk.