Ex-British soldier, 25, facing more than seven years in Turkish jail for fighting ISIS flees back to UK after months behind bars

A former soldier jailed in Turkey has revealed he has secretly returned to the UK because he is ‘not a criminal’.

Joe Robinson, 25, was sentenced to seven-and-a-half years’ imprisonment after being accused of fighting alongside the People’s Protection Units of Syrian Kurdistan (YPG), which the Turkish government considers a terrorist group.

The YPG is not banned in the UK and Robinson, from Accrington, Lancashire, said he only spent a month with them in Syria to provide medical support to civilians.

Mr Robinson was arrested in Didim, Turkey on a family holiday in July 2017 and spent months in detention but was later released on bail after appealing the conviction in September 2018. 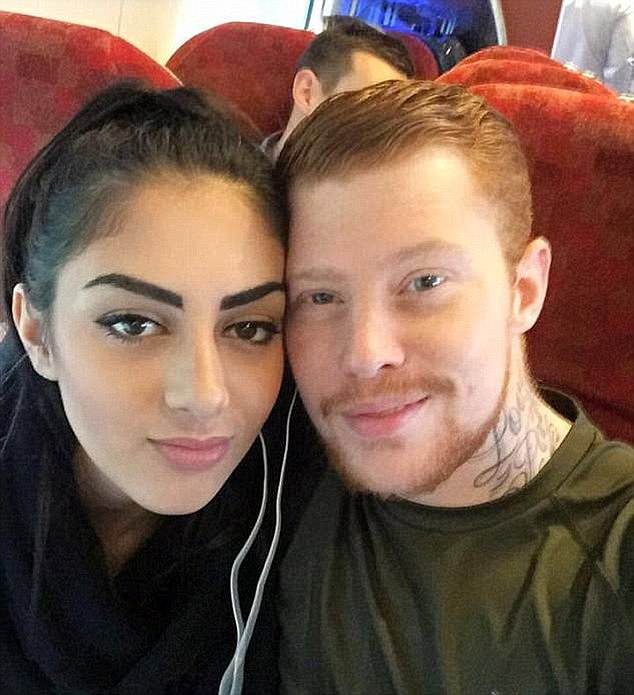 Joe Robinson, 25, right, pictured with fiancee Mira Rojkan, 23, has revealed he has secretly returned to the UK after being handed more than seven years in prison in September for allegedly fighting for ‘terror group’ YPG in Syria in 2015 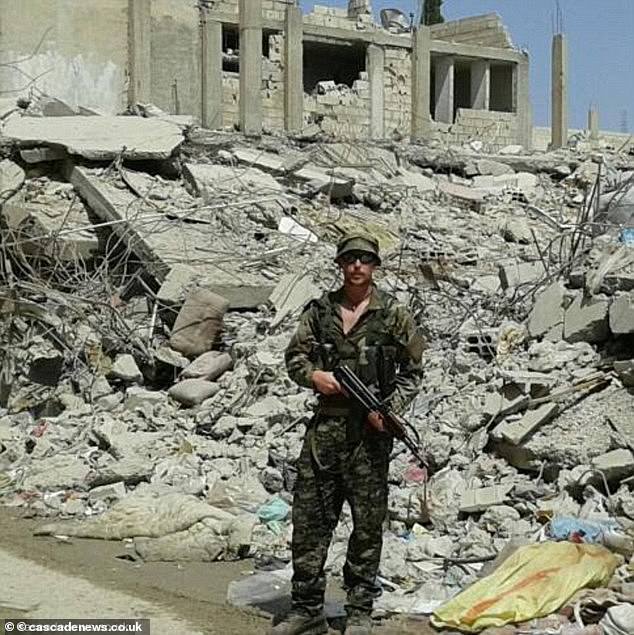 Mr Robinson, pictured in Syria, said he was ‘not a criminal’ and could not stay in Turkey to be jailed. He claimed he was ‘unaware of the YPG’s ideology’ and only provided medical help

He said he had to ‘take matters into his own hands’ and left the country because he was ‘not guilty’.

Mr Robinson, of Accrington, Lancashire, told the BBC he left without permission of Turkish authorities and added: ‘I could not accept the sentence and charges as I am not a criminal.’

He added he had only ‘helped civilians and saved lives’ during a month in Syria in 2015.

After his arrest his legal team said he was kept in poor conditions at a high-security prison in south-western city Denizli and was ‘not in a good place emotionally’.

Speaking at the time, his fiancee Kaya Sertkaya told the Guardian: ‘He told me he is being kept in one room, alone, for 23 hours a day. He is trying to remain positive but it is difficult because he only gets an hour of fresh air a day and cannot speak to anybody. 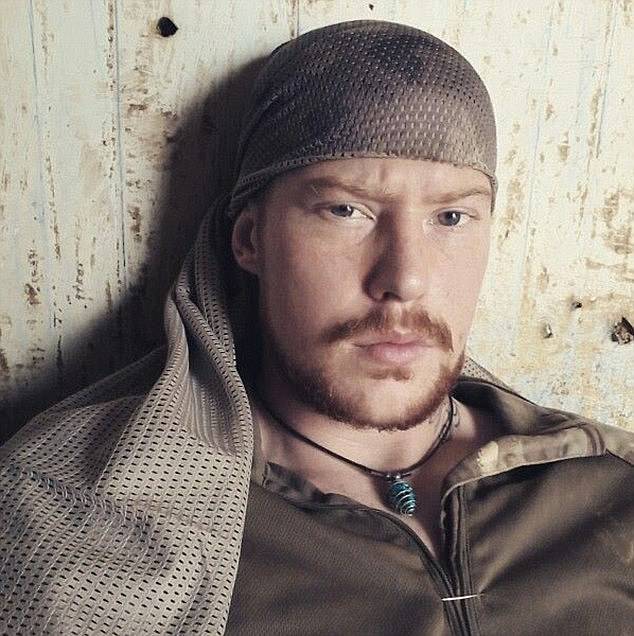 The former British soldier, pictured in Syria, who served in Afghanistan in 2015, was arrested on holiday in Turkey with his girlfriend in 2017 after officials spotted photos of his time in Syria on Facebook 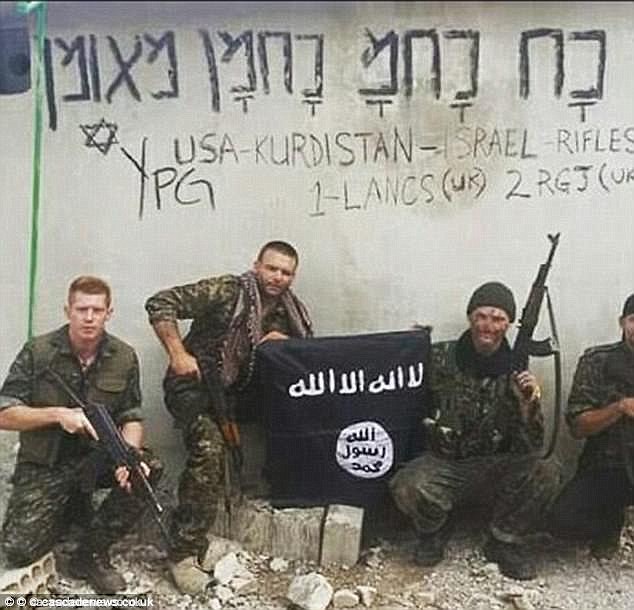 He later fought against ISIS in Iraq, pictured, with the local military for three months in 2015

‘When I spoke to him he was uncomfortable saying any more because there were two officers in the room listening to us.’

Mr Robinson was arrested in Turkey alongside Bulgarian fiancee Mira Rojkan, 23, who was later given a suspended prison sentence for supposedly engaging in terrorist propaganda, for what she said was sharing pro-Kurdistan messages on Facebook.

She previously called for Foreign Secretary Jeremy Hunt to intervene following the sentencing in September.

Speaking at the time, she said the Bulgarian state provided her with more support than Britain has her fiancee.

She said: ‘The UK should stop saying they can’t do it, we know they can. We’re talking about a veteran.’

Mr Robinson said he was unaware of the YPG’s ideology when he spent a month in Syria with them in July 2015 during which he did not see conflict.

He then spent the following three months in Iraq and fought against ISIS with the Peshmerga, the Iraqi Kurdish military. 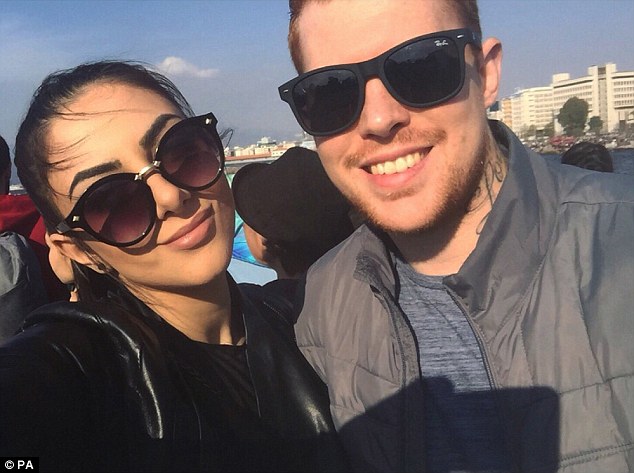 Ms Rojkan, pictured with Mr Robinson, had previously campaigned for the Foreign Office to intervene and secure his release

His family previously spoke of their joy at his return from Iraq in 2015, although his mother Sharon revealed she did not support his actions.

Mr Robinson was arrested by police upon his return at Manchester Airport but no charges were brought against him.

He had been serving a suspended sentence for grievous bodily harm after admitting breaking a teenager’s jaw a year earlier.

In September 2014 he received 12 months in prison, suspended for two years, with 240 hours’ unpaid work.

He travelled to Syria after a warrant was issued for his arrest in July after he failed to appear in court to deal with conditions of his sentence.

Mr Robinson joined the Army when he was 18 and toured Afghanistan with the Duke of Lancaster’s Regiment in 2012.

MailOnline has contacted the Foreign Office and the Home Office for comment.

It is understood the British Government did not help Robinson return to the UK.

Greater Manchester Police said the matter was being dealt with by the Home Office.