The Democratic National Convention kicked off Monday night with opening remarks from actress Eva Longoria before a montage ensued of Americans reciting the preamble of the U.S. Constitution.

Longoria, who is serving as the night’s MC, insisted that this election is the most important of her lifetime.

‘Every four years we go together to reaffirm our Democracy, this year, we’ve come to save it,’ Longoria claimed in her opening remarks.

‘We always hear that line about this being the most important election of our lifetimes, but this year, it really is,’ she urged.

Longoria added that ‘the past four years have left us diminished’ and specifically said in regards to the coronavirus pandemic that ‘the past few months have tested us all.’

Along with a flurry of ‘everyday Americans,’ soccer star Megan Rapinoe, actor Daniel Dae Kim, the woman who posed for the ‘Rosie the Riveter’ poster Agnes Moore and a few state legislators were featured saying ‘We the People.’ 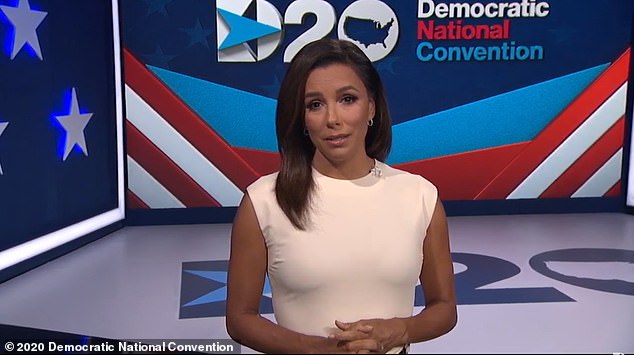 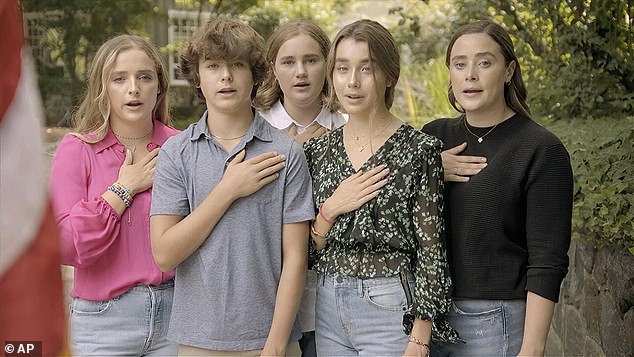 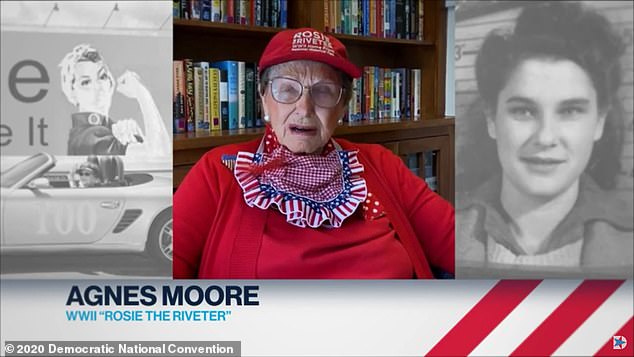 A flurry of ‘everyday Americans’ and some with star power, including the real life WWII ‘Rosie the Riveter’ Agnes Moore recited the Preamble to the U.S. Constitution 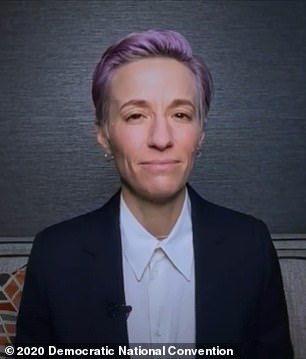 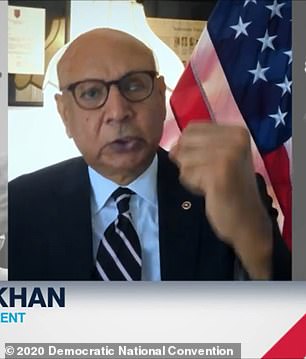 Soccer star Megan Rapinoe (left) and Gold Star father Khizr Khan (right), both of whom have been highly critical of Trump, were part of reciting the Preamble and repeating ‘We the People’

Khan harshly criticized Trump at the 2016 DNC after losing his son, Humayun, in 2004 in Iraq. He blasted Trump for his proposed Muslim ban.

All of the other speakers were in introduction of presumed Democratic candidate Joe Biden, who completed the preamble with the last sentence.

After the convention Chairman and Mississippi Representative Bennie Thompson slammed his gavel signaling the start of the 2020 events, Biden’s five grandchildren recited the Pledge of Allegiance and individuals of all ages, races and genders from all 50 states, Washington D.C. and U.S. territories sang the National Anthem.

The night’s imagery included Biden and his family along with a diversity of Americans of all races and gender designed to show the inclusiveness and diversity in the Democratic Party. It was part of the ‘We the People’ theme of the evening.

Family was included early on when the Pledge of Allegiance was led by Biden’s grandchildren: Natalie, Finnegan, Maisey, Robert, and Naomi.

‘I can assure you, that was not the first take!,’ Naomi Biden wrote on Twitter after their appearance. Most of the programming in the convention is pre-taped.

The Biden grandchildren were followed by a children’s choir singing the national anthem. The choir consisted of child from each state, wearing either a red, white or blue t-shirt, joining in singing ‘The Star Spangled Banner’ including a chorus of images filled the screen, dissolving into the stars on the flag.

Also joining the convention on its first night was legendary singer Bruce Springsteen, whose songs chronicle the struggles of the American middle class, a crucial voting bloc in this year’s election.

A montage of image set to Springsteen’s ‘The Rising’ included empty sporting arenas, President Trump holding up a bible in front of St. John’s church, demonstrators in celebration of the Black Lives Matters movement, and people wearing face masks.

The virtual convention is the first of its kind and comes in the midst of the COVID-19 crisis. It will end Thursday night with the nomination of Joe Biden.

After images of Trump’s infamous Bible photo-op were used in the Springsteen video, Washington, D.C. Mayor Muriel Bowser spoke on a roof overlooking ‘Black Lives Matter Plaza,’ the section of 16th Street N.W. painted with the yellow message the day after peaceful protesters were teargassed minutes before the president walked across Lafayette Park. 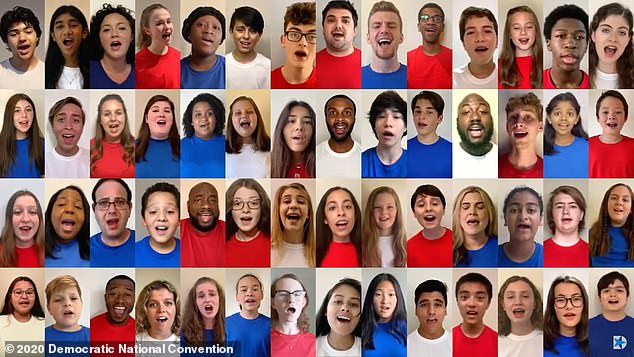 Performers from all 50 states, U.S. territories and Washington D.C. were edited together singing the Star Spangled Banner

‘While we were peacefully protesting, Donald Trump was plotting,’ she said. ‘He stood in front of one of our most treasured houses of worship and held a Bible for a photo-op. He sent troops in camouflage into our streets, he sent teargas into our air and federal helicopters too.’

‘I knew if he did this to D.C. he would do this to your city or your town,’ Bowser said. ‘And that’s when I said enough.’

That ‘enough’ was Bowser’s decision to create the plaza, situated due north of the White House.

‘I said enough for every black and brown American who has experienced injustice,’ Bowser said.

Bowser kicked off a virtual discussion on racial injustices after Longoria revealed the night would focus on systemic racism, the coronavirus pandemic and the economic crisis – and how Democrats plan to tackle those issues.

She also introduced Philonise Floyd, who provided brief remarks from Texas about his brother George Floyd’s death earlier this year, which was filmed, went viral and sparked months of nationwide riots and Black Live Matter protests.

‘Our actions will be their legacies,’ Philonise said while he and George’s other brother sat by his side.

He also initiated a moment of silence for George and other black Americans who died at the hands of law enforcement. 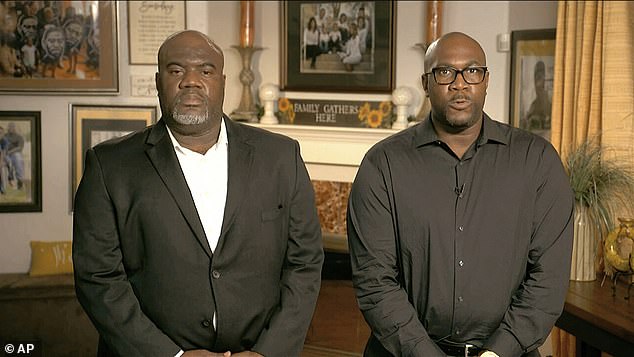 Philonise Floyd (right), the brother of George Floyd, spoke in a segment on racial injustices during the convention – he was joined by their other brother (left) 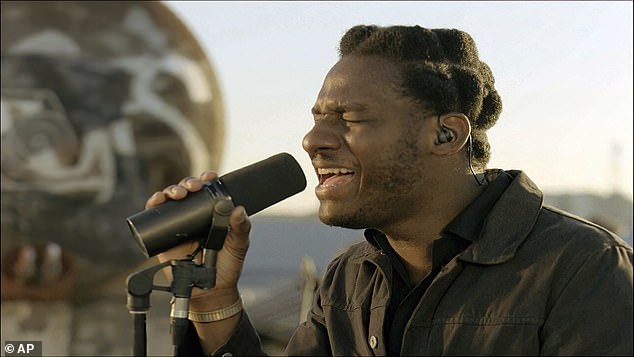 ‘How do we the people take the protests and turn them into progress?’ Longoria posed. ‘We need to address the economic inequalities that this virus has exposed and worsened.’

‘We need a president who understands that this is the moment,’ she said before a video of Biden addressing that exact issue played.

Following the segment on race, the first live speaker of the night Michigan Governor Gretchen Whitmer, who was once rumored as a top contender for Biden’s vice presidential pick, talked about the economy in her home states.

Whitmer, broadcasting from a union hall in Michigan, introduced herself to the nation the way Trump refers to her, ‘that woman from Michigan.’

She talked about former President Barack Obama and his then-vice president Joe Biden’s record on saving the auto industry in Michigan and then what those workers did to pay it forward.

‘Let me break it down, President Obama and Vice President Biden saved these autoworkers’ livelihoods and then these workers did their part to save American lives,’ Whitmer said. ‘That’s the story of this great nation. Action begets action, progress begets progress.’