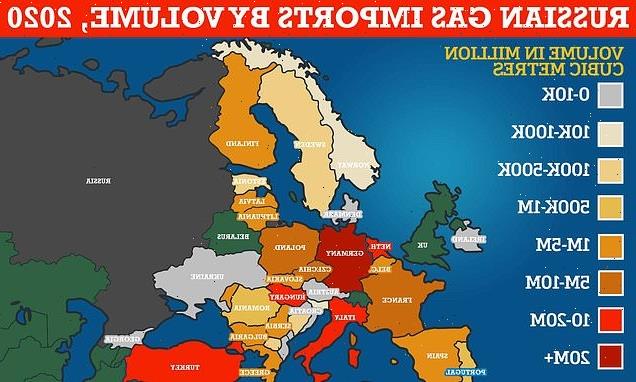 EU split over standing up to Putin: Bloc agrees ‘voluntary’ 15% cut in fuel use to tackle Russian gas squeeze… but with loopholes for most countries, including GERMANY

European Union countries have come together to agree a controversial ‘voluntary’ cut to its overall gas consumption by 15 per cent in the face of a Russian supply squeeze.

But loopholes in the agreement will ease the pain for many countries and industries, including prime offender Germany, as some EU governments had resisted the original proposal to impose binding cuts on every country.

Europe faces an increased gas squeeze from Wednesday, when Russia’s Gazprom has said it would cut flows through the Nord Stream 1 pipeline to Germany from 40 per cent to just a fifth of capacity.

Even at the height of a summer heatwave, European countries are quietly preparing for a very difficult winter to come, as they struggle to fill gas storage with Vladimir Putin gradually putting his thumb on the valve to Europe.

Before the war, Russia provided 40 per cent of the EU’s gas, but now it is thought that Putin is weaponizing this lever to pressure EU countries to drop their support for Ukraine. 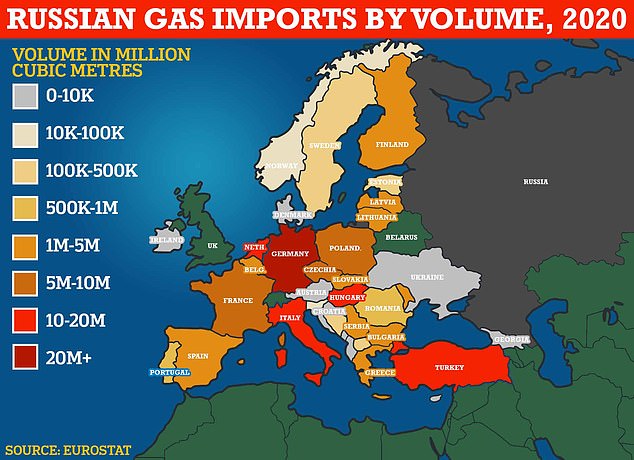 Germany is, by a long way, the largest importer of Russian gas in the EU – buying some 52billion cubic metres of gas in 2020 according to figures from the bloc. The gas supply is being slowly throttled by Russia – ostensibly due to repair work, though few doubt it is actually designed to punish Berlin for opposing the war in Ukraine 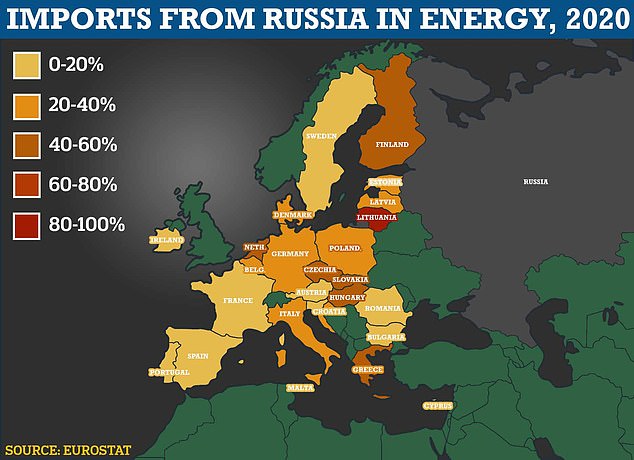 Despite importing so much gas, it makes up a smaller portion of energy used in Germany than other European countries (pictured) – but runs critical manufacturing industries 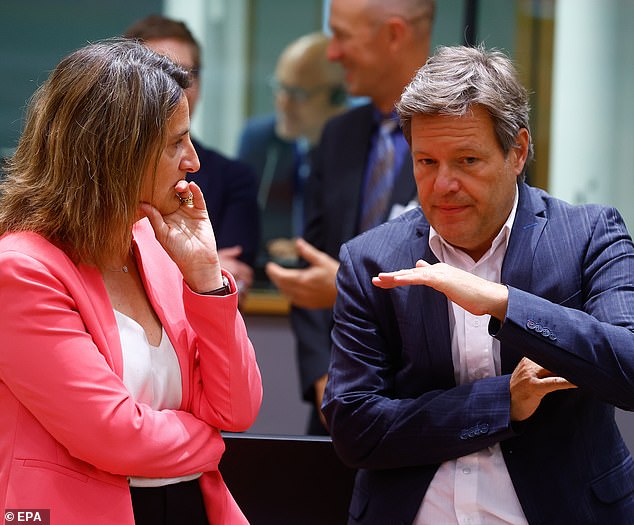 Under this pressure, energy ministers approved the European Commission proposal for all EU countries to voluntarily cut gas use by 15 per cent from August to March as a dozen members already face reduced gas supplies from Russia.

Ministers tried to spin the agreement as proof to Putin that Europe was remaining united in the face of Russian energy blackmail, with German Economy Minister Robert Habeck saying: ‘You will not split us.’

Hungary was the only country that opposed the deal, two EU officials said. However, Greece, Portugal, Spain, Cyprus and Malta are also thought to be against the obligatory gas consumption cuts.

But the southern states made clear their displeasure at the proposal, which is mostly designed to save the German economy from a deep recession.

Panic is already setting in in Germany at the prospect of a Russia gas cut off, with  Habeck saying he is taking shorter showers and regional leaders dimming street lights and closing swimming pools.

The 15 per cent ‘voluntary cut’, which is effectively a bailout measure for the Germany economy, comes a decade after the euro crisis, in which countries such as Portugal, Italy and Greece faced lectures from Germany on fiscal responsibility.

But Portugal and Greece, are far less reliant on Russian gas to power their economies – unlike Germany, which got over half of its gas from Russia before the invasion of Ukraine.

They argue that any cuts they make will be to rescue their formerly overbearing northern neighbour.

‘They cannot demand a sacrifice from us for which we have not been asked for an opinion,’ said Spain’s minister for ecological transition, Teresa Ribera, adding: ‘We have not lived beyond our means in terms of energy.’

Those with a limited ability to export gas to other EU countries can request a lower target, provided they export what they can.

That could include Spain, which does not rely on Russian gas, and has said cutting its own demand would not help other countries since it lacks infrastructure capacity to share spare fuel. 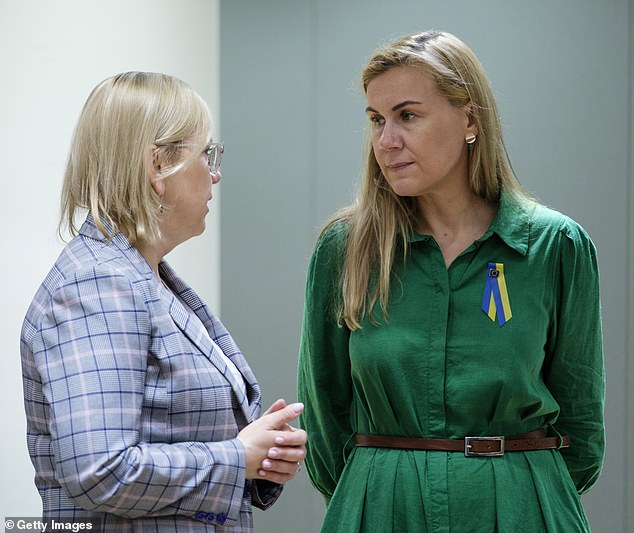 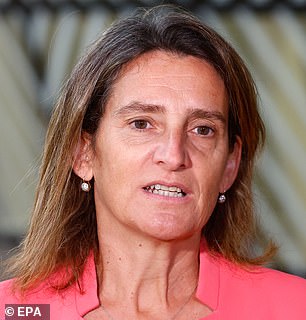 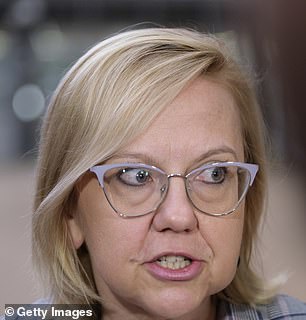 Both Spain and Poland were among countries that argued against a 15 per cent reduction in gas consumption across all EU countries, seeing as the threat of a Russian gas cut off did not imperil them as much as other countries 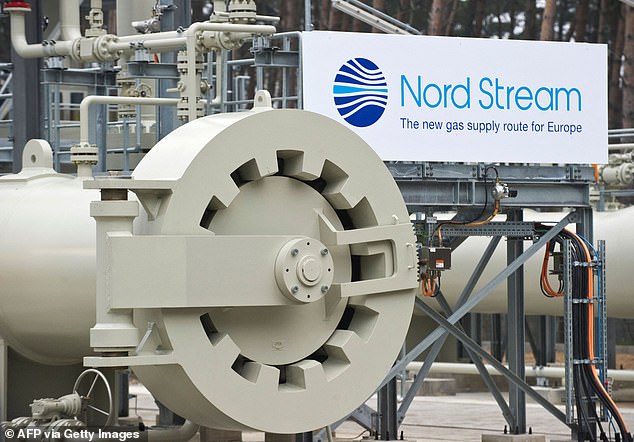 Germany imports more than half of is gas from Russia in a typical year. The vast majority of that gas arrived via Nord Stream 1, a pipeline that Moscow is now throttling it is thought in efforts to punish Germany for its support of Ukraine

However, Ribera struck a more conciliatory tone, explaining that ‘when someone asks for help, you have to help. Help can be in different ways, but I believe that the spirit of collaboration will prevail,’

Countries that meet an EU target for filling gas storage by August could face weaker targets – softening the cuts for roughly a dozen states, including Germany and Italy, based on current storage levels.

They can also exempt the gas they use in critical industries, such as energy-intensive steelmaking, from the target, an exemption which will disproportionately benefit Germany heavy industry.

The EU deal would also exempt from the binding 15 per cent gas cut countries such as Ireland and Malta that are not connected to other EU countries’ gas networks.

Russia’s Gazprom has blamed its latest reduction on needing to halt the operation of a turbine – a reason dismissed by EU energy chief Kadri Simson, who called the move ‘politically motivated’.

News of the latest reduction to Russian supply has driven gas prices higher, adding to the pain of filling storage, while creating incentives to use less. 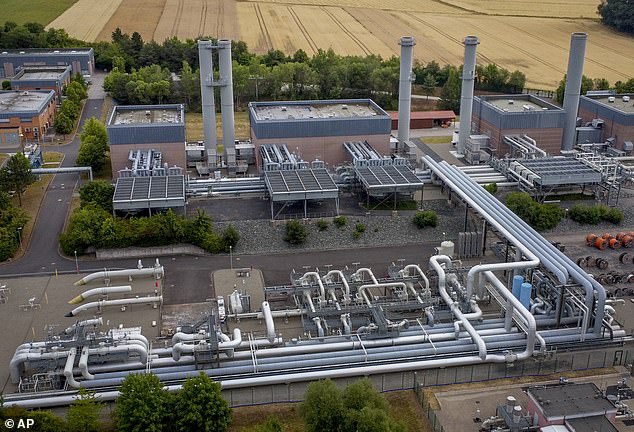 Countries that meet an EU target for filling gas storage (pictured: Reckrod gas storage plant near Eiterfeld, central Germany)  by August could face weaker targets – softening the cuts for roughly a dozen states, including Germany and Italy, based on current storage levels

Early on Tuesday, the benchmark front-month Dutch contract rose almost 10% and is more than 450% higher than a year ago, although down from record highs touched shortly after Russia began its invasion of Ukraine.

The EU plan has tested countries’ solidarity, with Greece and Poland among other the countries opposed to mandatory gas cuts. It will not be forgotten by Greece for generations the devastating austerity measures Germany imposed on the Mediterranean nation.

Polish Climate Minister Anna Moskwa said the deal would impose no constraints on Poland’s gas use, and opposed the idea that a country should curb its industrial gas use to help other states facing shortages.

Some EU diplomats raised concerns that the number of opt-outs in the final regulation may mean it fails to ensure countries save enough gas for winter.

Although governments including Germany, Europe’s biggest gas user, have upped their energy saving measures, EU countries have reduced their combined gas use by only 5, per cent despite months of soaring prices and dwindling Russian supplies.

‘Fifteen percent will probably not be enough given what the Russians have just announced,’ Irish Environment Minister Eamon Ryan said.

The deal requires backing from a majority of countries to trigger the binding gas cuts, after many opposed the Commission’s original proposal that it have the final say.