Revealed: England’s best and worst primary schools – so how does your child’s compare with rest of country?

Only half of the poorest pupils in England are reaching their expected level in national tests at the end of primary school, it was revealed today.

The figure of 51 per cent is far below the equivalent of 70 per cent for their richer peers, as England’s best and worst performing primary schools were revealed.

Poor pupils will not catch up with those better off until 2070 if the pace of change remains the same as it has since 2011, according to analysis of data released today.

Find out how girls and boys in your child’s school performed using our module, below: 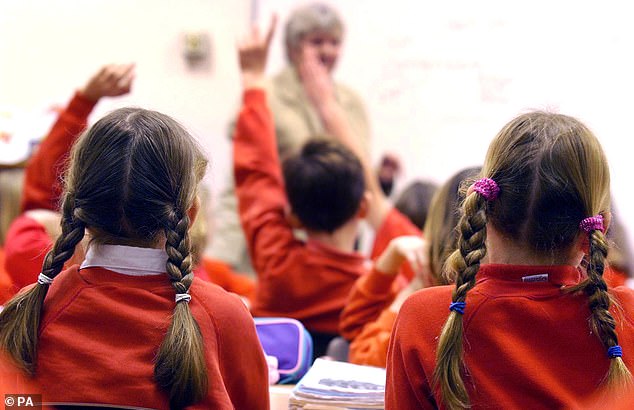 The study by BBC News comes as it emerged the number of primary school pupils reaching the expected standard in reading, writing and maths has risen again.

Across England, 64 per cent of 11-year-olds who sat this year’s Sats – or national curriculum tests – met Government targets in all three areas.

This was up from 61 per cent last year, according to the Department for Education which also released its league tables for primary schools today.

While the number of schools considered to be under-performing has decreased, 364 mainstream primaries in England fell below the primary school floor standard.

Press Association analysis found 91,620 pupils are taught at the under-performing primaries – representing around 2.1 per cent of children at mainstream schools.

The primary schools where 100% of pupils meet expected standards

Our Lady of the Rosary Catholic Primary School, Dalton-in-Furness

Schools are considered to be under-performing if fewer than 65 per cent of pupils reach the expected standard in reading, writing and maths, or if they fail to make sufficient progress in the three key areas.

The East and East Midlands had the highest percentage of schools below the floor standard, while London had the lowest at fewer than 1 per cent, according to the Government data.

Here is a summary by region of the number of mainstream primary schools in England that did not reach the Government’s floor standard for performance in 2017/18.

The list is ranked in descending order of percentage of under-performing schools.

It showed Norfolk had the biggest proportion of under-performing schools – 22 of the 231 mainstream primary schools in that local authority area.

The next highest proportions of schools below the floor standard were in Bedford, with two schools out of 23, and Portsmouth, three schools out of 32, both at around nine per cent.

A spokesman for Portsmouth City Council said: ‘Schools below the floor are receiving support, either through the local authority or through multi-academy trusts.

‘There is more work to be done, but it’s also important to point out that 87% of schools in Portsmouth are rated good or better. ‘

In Derbyshire, 14 of the local authority area’s 220 mainstream primaries were under-performing.

A spokeswoman for the county council said: ‘We are aware of schools that are performing below the standard set by the Government and work with each of them to make sure that the support needed for improvement is identified and secured.

‘We’re pleased to see a significant reduction in the number of schools performing below the DfE standard in Derbyshire over the last three years from 23 in 2016 to 14 this year and, working with schools, we are committed to reducing that number yet further.’

Schools come under this definition if, based on revised data for all of the past three years, fewer than 85 per cent of pupils achieved the expected standard at the end of primary school and they failed to make sufficient progress in reading, maths and writing.

This year’s figure equates to one in 20 of all schools included in the coasting calculation.

Earlier this year the DfE announced proposals aimed at ending confusion over how schools are measured.

The system of using the two standards – floor and coasting – to judge school performance will be replaced with a new single measure.

Figures also showed the gap between disadvantaged pupils – those in or formerly in care or eligible for free school meals – and their peers had continued to decrease, narrowing by 3% in the latest year and 13.2% since 2011, the department said.

He added: ‘Every child, regardless of their background, deserves a high quality education and opportunity to fulfil their potential.’

Which primary schools in England are missing expected standards?

Here is a list of the 364 state-funded mainstream primary schools in England that did not meet the Government’s floor standard for performance in 2017/18.

The information reads, from left to right: name of school, town/city (where appropriate), local authority.

The list is divided into regions, and the schools appear alphabetically by local authority.

CofE School of the Resurrection, Manchester

YORKSHIRE AND THE HUMBER