England rugby star Billy Vunipola will be hauled before RFU bosses after he backed Australian player’s homophobic comments with an Instagram post reading: ‘Man was made for woman to procreate’

Billy Vunipola has been summoned for talks with the Rugby Football Union after he backed an Australian player’s homophobic comments with an Instagram post reading: ‘Man was made for woman to procreate’.

On Saturday the 26-year-old, whose mother is a Methodist minister, was booed during his appearance as a second-half replacement against Bristol, who also played gay anthem ‘It’s Raining Men’ on their PA system. 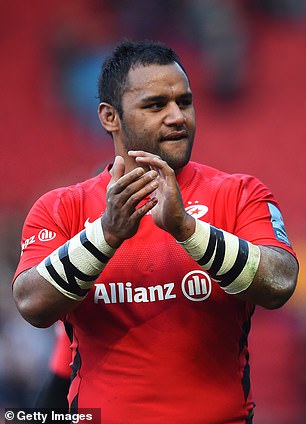 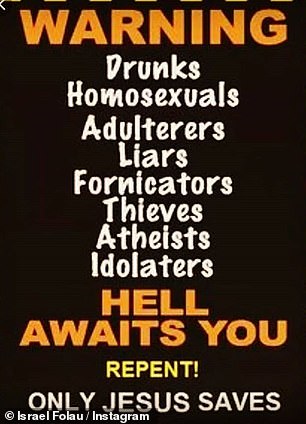 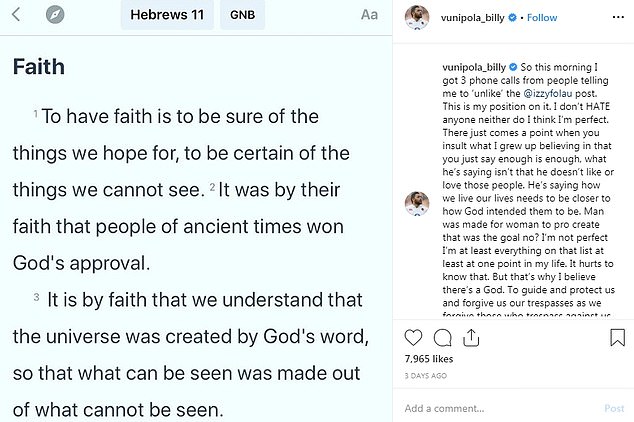 The post on Saturday in which Vunipola said ‘man was made for woman to pro create that was the goal, no?’ [sic]

The RFU is refusing to provide any details for its meeting with Vunipola, insisting it remains a private matter.

Twickenham has also been wary at this stage of saying whether disciplinary action will be taken, but if it is decided to pursue the matter further, it would most likely be under the broad charge of ‘bringing the game into disrepute’.

Saracens are conducting their own investigation after declaring Vunipola has failed to meet his responsibility as a representative of the club, while condemnation of his view has also come from Premiership Rugby and the Rugby Players’ Association.

The club’s director of rugby Mark McCall said ‘I’m sure there’s stuff going on in his head’ but will pick him for Saturday’s European semi-final against Munster at Allianz Park.

Channel 4, meanwhile, have removed him as one of the faces of their Heineken Champions Cup coverage.

Folau has been told by Rugby Australia that he is in breach of its code of conduct and will have his four-year contract terminated, subject to the 48-hour window for him to appeal.

Wallabies head coach Michael Cheika has ended Folau’s international career by revealing his comments on social media – his second such infringement – mean he cannot be selected.

Folau is unrepentant over the post, which – along with Vunipola’s – remains visible, adding that: ‘I believe His plans for me are better than whatever I can think. If that’s not to continue on playing, so be it.’ 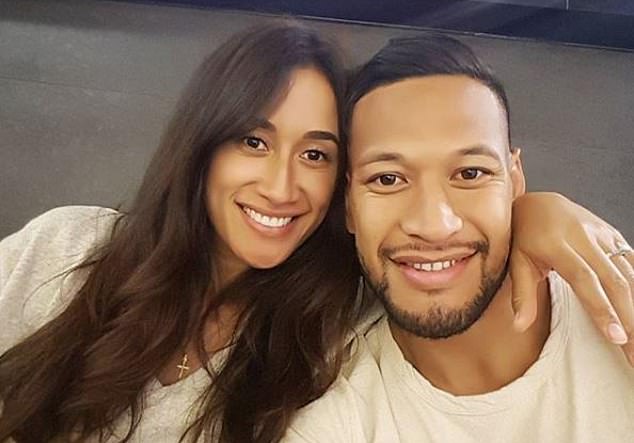 Israel Folau, pictured with his wife Maria, has refused to back down on his comments, saying he would rather face a ban than retract them

Peter Lynas, a spokesperson for the Evangelical Alliance – the oldest and largest evangelical unity movement in the UK – defended Vunipola’s position and asked whether religious beliefs are also being accommodated by rugby’s drive for diversity.

‘Billy Vunipola has expressed the view of evangelical Christians on marriage and quoted the Bible in the process,’ Lynas said.

‘He made clear in his post that he was far from perfect himself and doesn’t hate anyone. For this he is now being condemned and threatened with disciplinary action.

‘Is he being disciplined for quoting scripture? For holding orthodox Christian beliefs or just for expressing them? Do rugby players have freedom of religion or is this another faith-free zone? 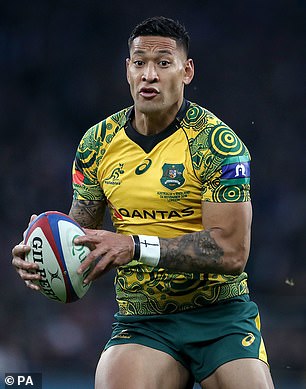 Referring to Folau, Rugby Australia boss Raelene Castle said: ‘Following the events of last year, Israel was warned formally and repeatedly about the expectations of him as player for the Wallabies and NSW Waratahs with regards to social media use and he has failed to meet those obligations.

‘It was made clear to him that any social media posts or commentary that is in any way disrespectful to people because of their sexuality will result in disciplinary action.

‘All professional Rugby players in Australia are bound by the Code of Conduct and there is a process in place for any disciplinary matter.

‘We appreciate that this particular matter will attract significant interest, but due process must be followed.’

Folau’s club side, New South Wales Waratahs, have also dropped him and clubs in Europe will be wary of signing him, leaving his entire career in doubt.

Rugby league bosses have also ruled out a possible return for Folau to the form of the sport where he began his career.

Folau has been almost ever-present in the Wallabies number 15 shirt since switching to rugby union from Australian Rules in 2013.

He has scored 32 tries in 62 matches for Australia and his sacking would be a massive blow to coach Michael Cheika at this year’s Rugby World Cup in Japan. 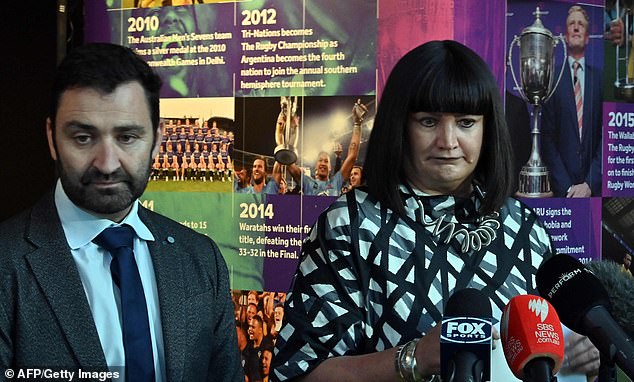 But Wallabies coach Cheika said earlier on Monday that he would not be able to pick Folau again due to the ‘disrespectful’ social media posts.

‘We had a discussion after the last time and made it pretty clear about his right to believe and our support in that, if that’s what he wants, to be part of the team,’ Cheika added.

‘But getting it out in that disrespectful manner publicly is not what our team is about.

‘When you play in the gold jersey we represent everyone in Australia, everyone. Everyone that is out there supporting us, we don’t pick and choose.’