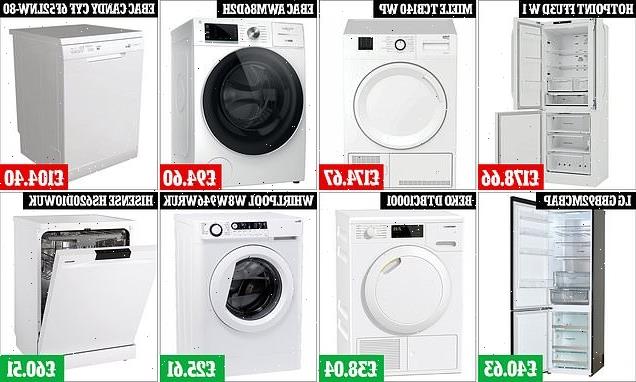 The energy-hungry white goods adding £130 to bills: Which? study reveals fridges, dishwashers and washing machines with highest running cost…so how many do you have in YOUR home?

Energy-inefficient fridge-freezers will add over £130 a year to households’ bills, according to new research.

Consumer advice site Which? found the average total cost of running all white good appliances is set to rise by £77 a year following the energy price cap increase of April 1.

Households with energy-hungry models of white goods, however, face steeper rises in their bills.

The Hotpoint FFU3D or FFU3D X 1 fridge-freezers will cost £178.66 to run annually at the new price cap rate of 28p per kilowatt-hour.

That compares with a cost of just £40.63 for the most energy efficient fridge-freezer identified by the study – the LG GBB92MCBAP – leaving owners more than £130 better off relative to operators of the least efficient model. 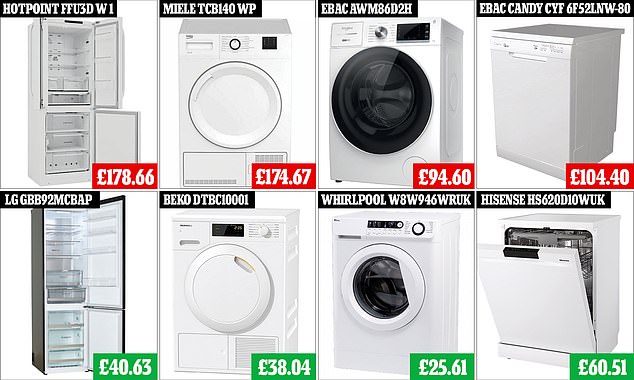 Consumer advice site Which? found the average cost of running appliances is set to increase by £77 on average following the higher energy price cap rate which came into effect on April 1

Which? said: ‘Fridge-freezers are the most expensive appliance to run.

‘Yet our testing reveals that some use less than a quarter of the energy that others use.’

Although buying a new, more energy-efficient model implies a significant upfront cost – of around £1,800 in the case of the LG GBB92MCBAP – that amount could be recouped in 13 years in the form of lower annual running costs, Which? said.

The research also examined the running costs of other white goods under the new higher energy price cap rate, comparing the four most popular models on the market.

In the washing machine department, the Ebac AWM86D2H and AWM74D2H models were found to cost £25.61 to run the cotton wash at 40°C four times a week over a year, comparing favourable with the Whirlpool W8W946WRUK which gobbles up four times as much energy and costs £94.60 annually.

Average annual energy bills have soared in Britain to £1,971 since April 1, following a 54 percent increase in the energy price cap.

Emily Seymour of Which? told The Telegraph: ‘If you are in the market for a new washing machine or fridge-freezer be sure to choose an energy efficient model.

‘You can cut energy consumption by avoiding small loads in your washing machine and dishwasher and not overfilling your fridge.’