Independent NSW MP Alex Greenwich has called for an end to the “culture war” over transgender women’s participation in sport, as both sides of the political debate claim they have been threatened with violence and referred the allegations to police. 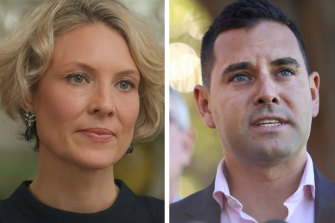 Liberal candidate Katherine Deves and NSW Sydney MP Alex Greenwich have both said they’ve been targeted by threats since speaking out about the participation of transgender women in sport.Credit:SBS/SMH

Its national hotline QLife has experienced a 19 per cent increase in calls to its support service since the election started, including a 53 per cent spike on days when there is significant media coverage of Deves’ views on LGBTQ+ issues.

Greenwich, the NSW MP for Sydney, said he had made a report to NSW Police about social media messages that threatened to “bash LGBTQ freaks” and called him a “piece of shit” for his stance supporting transgender people.

On Sunday, Deves said she’d been targeted by death threats as she spoke publicly for the first time since her inflammatory comments about transgender people and LGBTQ issues ignited a media storm on the issue.

Deves told public broadcaster SBS News in an interview aired on Sunday night that her family had left Sydney due to threats to her safety. “I have had to have the police and the AFP [Australian Federal Police] involved,” Deves said.

The Australian Federal Police is aware of Deves’ claims but would not confirm whether an official complaint had been made or was being investigated. A spokesperson for the AFP said it “does not comment on matters that may be the subject of investigation”.

NSW Police said Surry Hills police had received a report from Greenwich, who alleged he had received threats via social media. “An investigation into the incident is continuing,” a spokesperson said.

Greenwich told The Sydney Morning Herald and The Age that the comments made to him were deeply distressing but “nothing compared to what trans people, especially trans youth, experience on a daily basis”.

“Threats of violence are being made against public figures and calls to mental health support services for trans people are up over 50 per cent,” he said. “Surely it’s time for Morrison to end his culture war on an issue resolved by sport years ago.”

Section 42 of the Sex Discrimination Act allows people to be excluded from competing in sport based on their sex, gender identity or intersex status when the strength, stamina or physique of competitors is relevant.

She has been in the spotlight for her views on LGBTQ issues after several tweets from her now-deleted account were revealed, including posts that claimed “half of all males with trans identities are sex offenders” and comparing her anti-trans activism to resistance against the Nazis.

In her interview with SBS she said it was “dangerous to speak your mind” and partially blamed Twitter for the backlash, although she pledged to speak with more nuance in future.

“I recognise that trying to prosecute arguments about complex, nuanced and difficult subjects … should not take place on a platform that propagates offence and division and hurt,” she said.

The lawyer and mother-of-three was selected as the Liberal Party’s candidate to win the formally blue-ribbon northern beaches seat of Warringah back from independent Zali Steggall, who defeated Tony Abbott in 2019.

Morrison has sought to portray Deves as a champion of women’s rights. “She is a woman standing up for women and girls and their access to fair sport in this country,” he has said. “I am not going to allow her to be silenced.”

Greenwich threatened to withdraw his support for the Coalition state government after Perrottet agreed he believed “young girls should compete against young girls” and rejected calls for Deves to be disendorsed.

Perrottet last week called for a more tolerant and respectful conversation around the issue, but insisted his views were “in line with fair-minded Australians”.

Victorian Premier Daniel Andrews has tried to calm the conversation, saying in 20 years he had never had a school community come to him to discuss transgender girls in sport.

“Is this the biggest issue in our nation today? I don’t think it is. And I think only desperate people who are into wedge politics … would push this.” he said.