Judge throws out ‘spurious’ claim by ex Emmerdale actress who sued repair firm over £1000 bill to fix the hot tub at her £4.4million home claiming they botched the job and left her and her husband unable to use it for months

Former Emmerdale actress Georgia Slowe has lost a bitter court battle with workmen after suing them for ‘botched repairs’ on a leaking hot tub at her £4.4 million North London townhouse.

The 53-year-old actress, who played Perdita Hyde-Sinclair in the long-running ITV soap, told a judge she was ‘very cross’ over work carried out on the spa at her seven-bedroom, five-bathroom house in a leafy suburb in November 2017.

Mrs Slowe, who was nominated for a Laurence Olivier Award in 1989, told a judge at Central London County Court that her hot tub was left covered in glue and continued to leak despite being invoiced £1,052 by Hot Tub SOS Ltd.

The Hampshire-based firm insisted they did not breach their contract because Mrs Slowe was told that using a silicone sealant was ‘the cheaper option’, and that she ‘didn’t want to pay’ the additional £600 required to have the leaking part replaced.

Calling the claim ‘spurious’, they insisted they had never promised the glue repair would be permanent and didn’t charge her for it, general manager Chris Perry and engineer Stephen Horler told Judge Ian Avent. 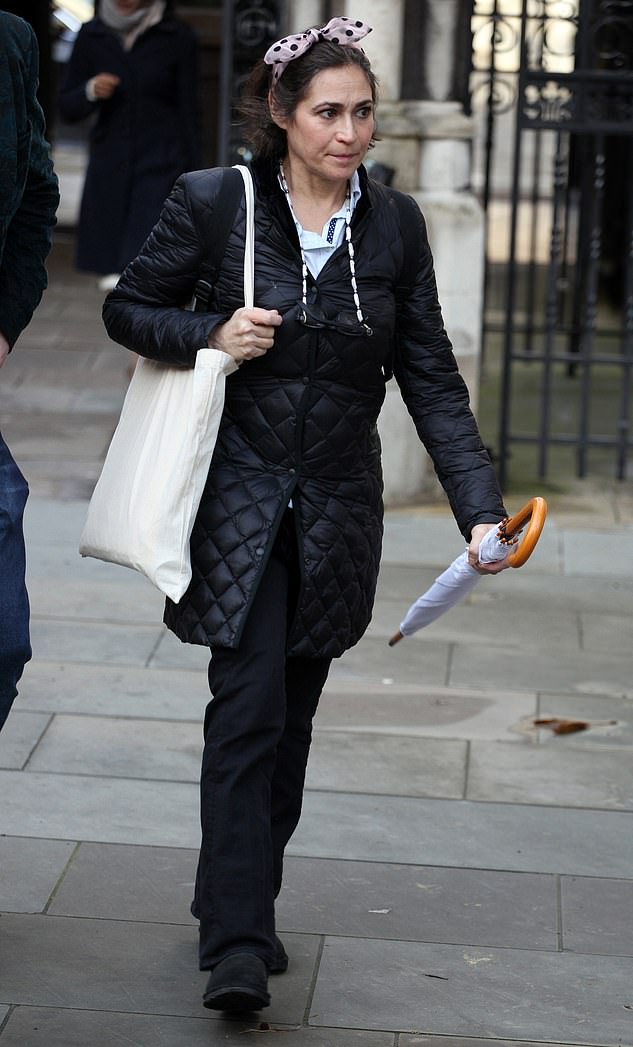 Loses claim: Emmerdale actress Georgia Slowe, 53, has lost a bitter court battle with workmen after suing them for ‘botched repairs’ on a hot tub at her £4.4 million London townhouse. A judge ruled the hot tub repair company had made it clear the work carried out was temporary

‘It wasn’t worth saving a few hundred pounds for months of aggravation.’

Judge Avent threw out her claim, rejecting her accusations against Hot Tub SOS, which he said had done its work with ‘care and skill’.

Mrs Slowe began acting when she was a child and has enjoyed a successful career.

She appeared in Emmerdale between 2006 and 2008, as well as playing Alice in the cult gothic fantasy The Company of Wolves in 1984. She was later nominated for a Laurence Olivier Award for her performance as Juliet in Romeo & Juliet in 1989.

She was married to Ray Kelvin, founder of the Ted Baker clothing chain from 1993 until they divorced in 2000, after having two sons.

Then later remarried to photographer Stuart McClymont in 2017 with whom she shares the £4.4m house where the row over the hot tub erupted.

The court heard that Ms Slowe called out Hot Tub SOS after discovering her tub had started leaking around a bank of embedded LED lights used to illuminate it whilst in use. 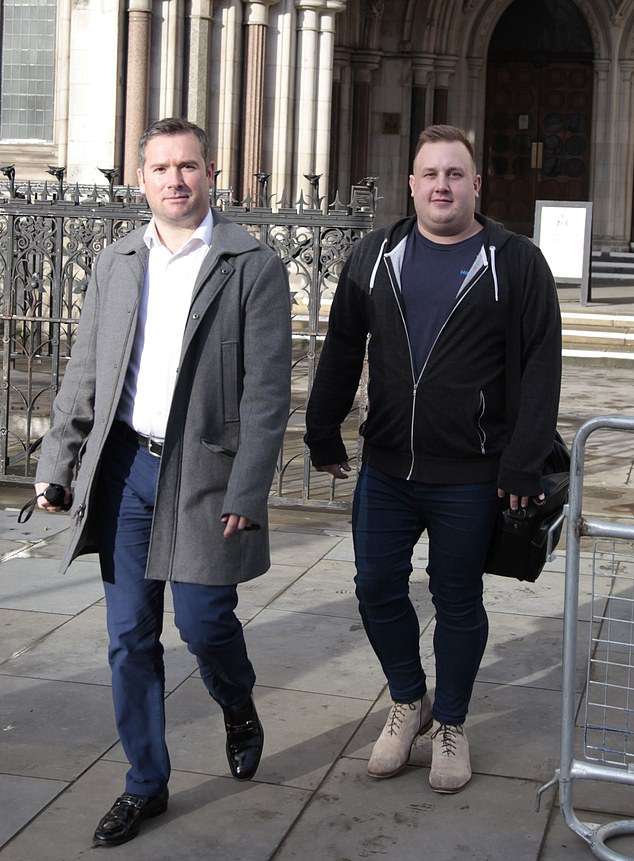 The hot tub ‘was important to her and her husband,’ the judge said, because soaking in it helped sooth back pains the actress had been suffering.

The leak had caused water to get into the pump and electrics, which needed to be replaced to the tune of over £1,000.

Hot Tub SOS engineers told the judge they also informed the actress that to replace the lights to stop the leak would cost an additional £600 and the job would have to be done by a specialist on another occasion.

The company said she was ‘not prepared to pay’ the extra £600 and, in the circumstances, ‘reluctantly suggested’ they could try to mend the lights with a special silicone glue.

However, engineer Stephen Horler wrote out a disclaimer on the £1,052.40 invoice which Ms Slowe’s husband signed, saying the glue fix was not guaranteed beyond 28 days. 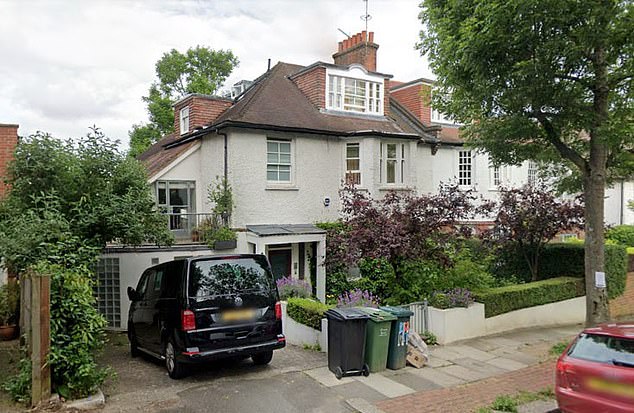 The 53-year-old actress, who played Perdita Hyde-Sinclair in the long-running ITV soap, told a judge she was ‘very cross’ over work carried out on a spa at her seven-bedroom, five-bathroom house in the leafy North London suburb in November 2017 (her London townhouse above)

Subsequently, Ms Slowe found that the tub was leaking again – and even worse than before, the court heard.

A row ensued because the new leak was not discovered until after the 28 day period and the repairmen said they would have to charge a £125 call out fee to travel from Hampshire to inspect the problem.

Ms Slowe refused and said she wanted the work redone for free.

‘I’m not going to pay £1000 to have a leaky hot tub,’ she told the judge, adding of her refusal to pay the callout fee, ‘we argued back and forth because I thought it was immoral.’

She eventually enlisted another repair company, which replaced the pump fitted by Hot Tub SOS and replaced the LED lights they glued. 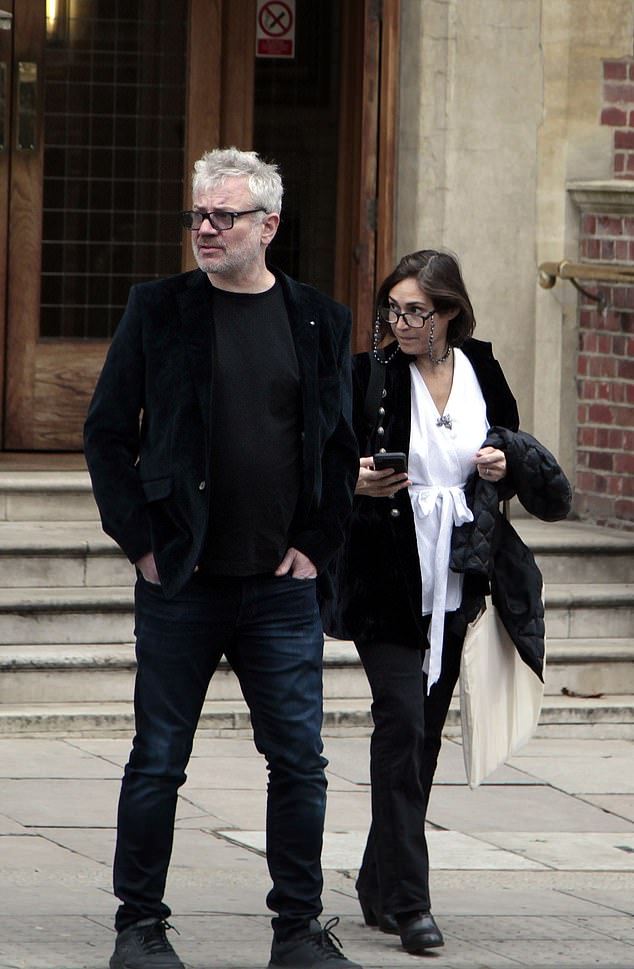 Mrs Slowe married photographer Stuart McClymont in 2017 and the pair now share the £4.4m house in where the row over the hot tub erupted. The hot tub ‘was important to her and her husband,’ the judge said, because soaking in it helped sooth back pains the actress had been suffering

The actress went on to sue Hot Tub SOS, claiming thousands in damages for the cost of the repairs the other company carried out and reimbursement for their own bill for ‘bad work’.

She told the judge that she had only agreed to ‘glueing the lights’ because she had been told it was a permanent cheap fix.

‘The gentleman that was working on the hot tub gave me his absolute assurance,’ she said.

‘I would not have gone for an option that would mean that the hot tub carried on leaking.

‘They never said it wouldn’t be a permanent fix otherwise I wouldn’t have gone for it in a million years. After they left, it was leaking worse than before.

‘I wouldn’t have gone for it if it was going to happen again. Why would I do that? It would have been completely idiotic and I’m seriously not an idiot,’ she said. 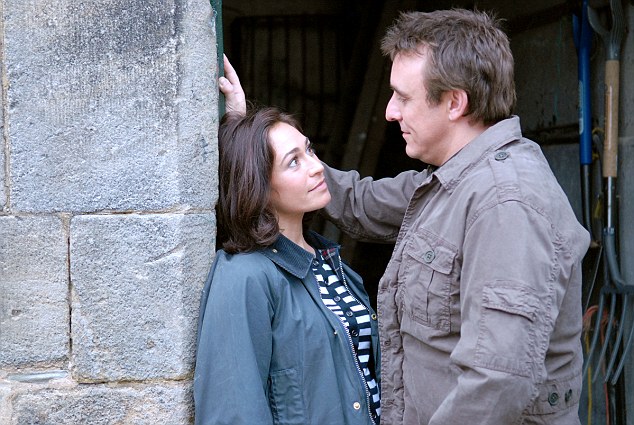 Georgia Slowe as Perdita Hyde-Sinclair in Emmerdale in 2007. She was also nominated for a Laurence Olivier Award for her performance as Juliet in Romeo & Juliet in 1989

She also complained that the glue repairs left her tub in a mess, saying she spent the next day scrubbing it off.

‘The whole of the hot tub the next day was covered in this rubbery stuff,’ she said.

She added: ‘It turns out the special glue they used was only silicone.’

On the written receipt signed by her husband setting out that the glue fix was not guaranteed to last more than 28 days, she said: ‘My husband didn’t read it, he just signed.’

Mr McClymont added: ‘I made a mistake in not reading it. I didn’t think I was signing a legal document. I thought I was just signing for the payment.’

Hot Tub SOS general manager Chris Perry told the judge the actress had brought ‘a bit of a spurious claim.’

Judge Avent told Ms Slowe: ‘Your husband signed the paperwork saying it had been repaired and you were satisfied with it.

‘It has been established law for 100 years now that a person is bound by their signature, whether they read the document or not.’

Giving his ruling, he added: ‘The burden is upon Ms Slowe to prove that her case is to be preferred. She alleges there had been a breach of contract. 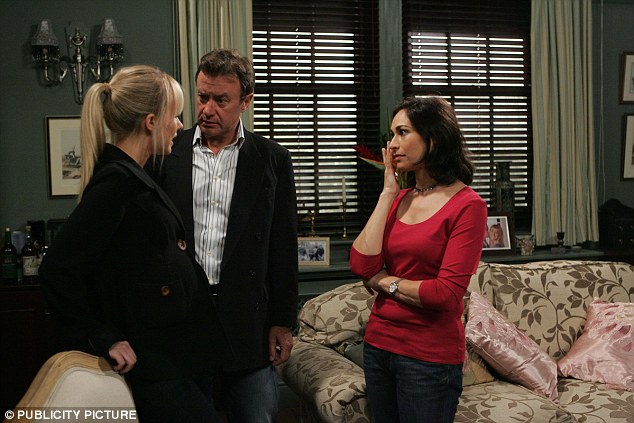 Georgia Slowe as Perdita Hyde-Sinclair in Emmerdale in 2008. She was also nominated for a Laurence Olivier Award for her performance as Juliet in Romeo & Juliet in 1989, as well as having appeared in cult British horror The Company of Wolves in 1984

‘In the end, she went for the glueing process. She opted for the cheaper option and instructed Hot Tub SOS to carry out repairs.’

There was ‘no evidence at all’ from other engineers that Hot Tub SOS’s work was shoddy or that the pump they fitted was at fault, he added.

Of Ms Slowe’s complaint that she suffered months of stress, the judge said: ‘That may well be, but that’s part of everyday life I’m afraid. Your stress and inconvenience doesn’t fall under a head of damage.’

Throwing out her claim, he went on: ‘Ms Slowe wants her money back. She didn’t want to pay twice. Hot Tub SOS defend the claim, on the basis that they simply followed the instructions were given and carried out their part of the bargain.

‘There was no charge in relation to the glueing of the lights so she suffered no loss. The only loss she had suffered arguably is the replacement of the pump and I’m not satisfied on the balance of probabilities that the pump required replacement.

‘I don’t accept that Hot Tub SOS gave an unqualified representation that there would be a permanent fix and there would be no further leaks in this tub.

‘I take the view that Hot Tub SOS did the best they could in the circumstances and performed their part of the bargain with reasonable care and skill.’