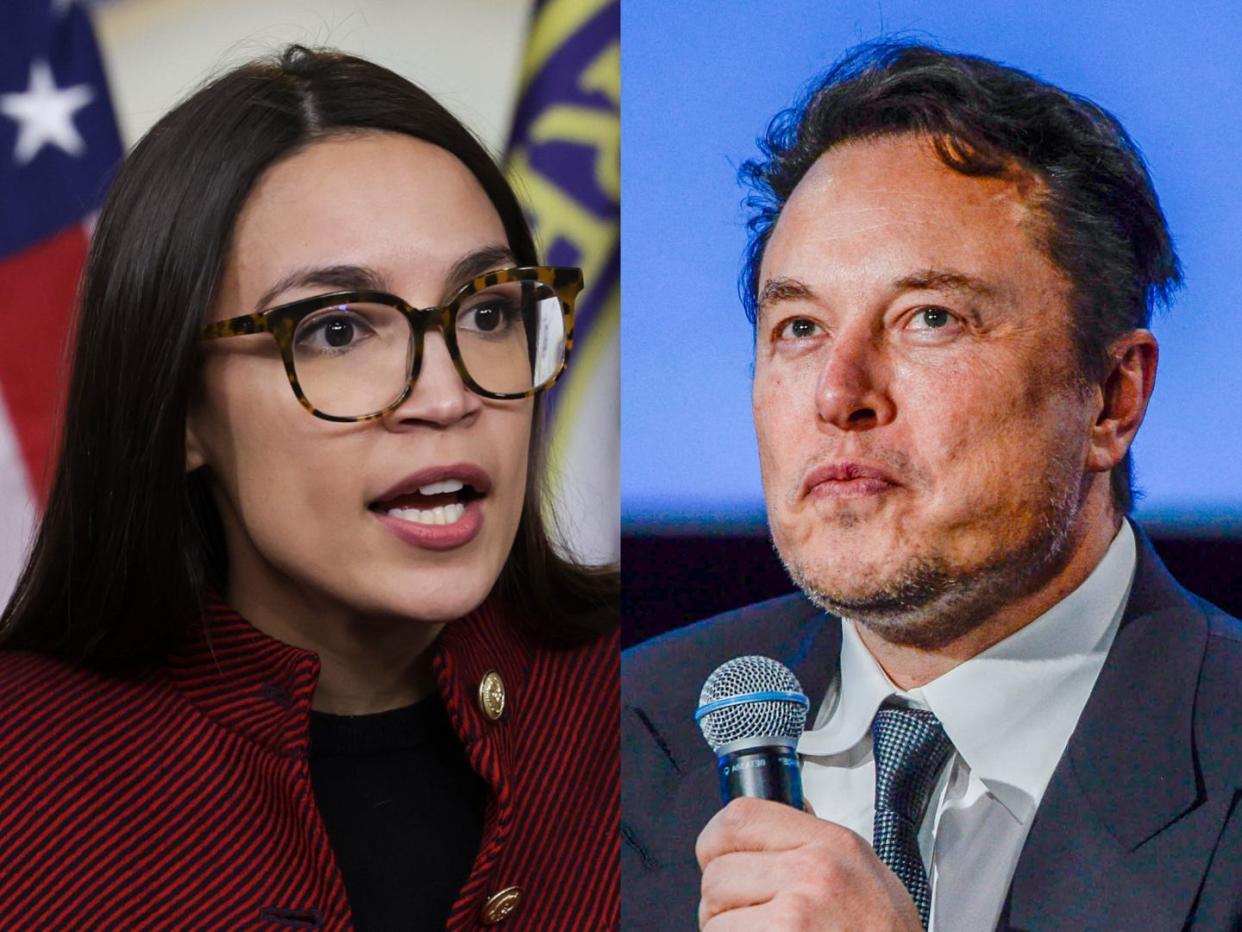 Elon Musk and Rep. Alexandria Ocasio-Cortez are in another Twitter spat.

On Thursday evening, Musk suspended the accounts of at least half a dozen journalists and tweeted an explanation for the move. He claimed the suspended journalists had doxxed him, a violation of Twitter's updated privacy policy that was put in place on Wednesday.

"You're a public figure. An extremely controversial and powerful one. I get feeling unsafe, but descending into abuse of power + erratically banning journalists only increases the intensity around you," Ocasio-Cortez wrote.

"Take a beat and lay off the proto-fascism. Maybe try putting down your phone," she added.

You’re a public figure. An extremely controversial and powerful one.

I get feeling unsafe, but descending into abuse of power + erratically banning journalists only increases the intensity around you.

Take a beat and lay off the proto-fascism. Maybe try putting down your phone. https://t.co/BniyYUqWMY

The congresswoman added that she understands where Musk is coming from, saying that she, too, has been "subject to real + dangerous plots."

"I didn't have security and have experienced many scary incidents," she tweeted. "In fact, many of the right-wing outlets you now elevate published photos of my home, car, etc. At a certain point you gotta disconnect."

Some 20 minutes later, Musk tweeted his response: "You first lol."

'Billionaire with an ego problem'

Musk and Ocasio-Cortez have had several tense exchanges on Twitter. In April, Ocasio-Cortez called Musk a "billionaire with an ego problem" who only bought Twitter "because Tucker Carlson or Peter Thiel took him to dinner and made him feel special." In response, Musk tweeted: "Stop hitting on me, I'm really shy."

In November, Ocasio-Cortez hit out at Musk for "trying to sell people on the idea that 'free speech' is actually a $8/mo subscription plan," referring to the billionaire's plan to charge Twitter subscribers a premium for verification.

Musk replied to the congresswoman's tweet, saying: "Your feedback is appreciated, now pay $8."

Also in November, Ocasio-Cortez reacted to Musk's public poll on whether former President Donald Trump's Twitter account should be reinstated.

"Idk man, last time he was here this platform was used to incite an insurrection, multiple people died, the Vice President of the United States was nearly assassinated, and hundreds were injured but I guess that's not enough for you to answer the question. Twitter poll it is," Ocasio-Cortez said in a tweeted response to Musk.

Ocasio-Cortez and Musk did not immediately respond to Insider's requests for comment.