No, your eyes aren't playing tricks on you.

One of the women pictured in the tweet is Senator Elizabeth Warren, the 70-year-old Massachusetts Democrat with presidential aspirations. The person shaking her hand is Stephanie Oyen – a Minnesota native whose Warren impression is so uncanny, fans mistakenly clamoured for selfies with her during the senator's Monday night rally.

If you haven't figured it out by now, Oyen is standing on the left. She figured her old Halloween costume – a blue blazer and clear glasses to mirror Warren's signature look – would "get a little laugh here and there" at Macalester College, where the senator was set to make her first campaign stop in the state.

Oyen arrived about 20 minutes before Warren and began to sift through a crowd so large it forced organisers to move the event outdoors. As she scoped out a seat near the front, one person's misguided comment triggered instant pandemonium: "Oh my God, there she is!"

Within seconds, Oyen was fending off hordes of Warren supporters eager for her attention. Her frequent pleas that she wasn't actually Warren were either ineffective or flat-out ignored. 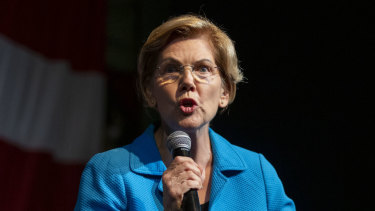 "People kept taking selfies with me, even when I said I'm not her," Oyen, who always wears her hair short, said in an interview Tuesday. "They would say, 'Who will know? No one's going to know.' "

Oyen hails from the Minneapolis suburb of Edina and has spent her entire career in the mortgage industry. She's long-admired Warren's role in shaping the Consumer Financial Protection Bureau and seized upon the opportunity to see her up close on Monday.

When she finally heard Warren speak, she was "blown away." But after the speech, when Oyen lined up to take a photograph with the senator, it was Warren who stood in awe.

"She pointed at me and said, 'we need to talk!'" Oyen recalled. After their photo op, a staffer called Oyen back for another picture where she had a longer conversation with her doppelganger.

"I was able to tell her I really admire you – clearly," she said.

Oyen says she later took off the glasses and blazer to stymie the attention, but it didn't really help. After explaining the costume to a man who wanted a photo of Oyen with his daughter, he jokingly replied: "I don't quite believe you."

Even though her costume is always a hit, and Oyen has even been stopped in public because of the resemblance, Oyen says she doesn't really see it as much as others.

Part of the issue, she acknowledged, is the age difference. Oyen is 50.