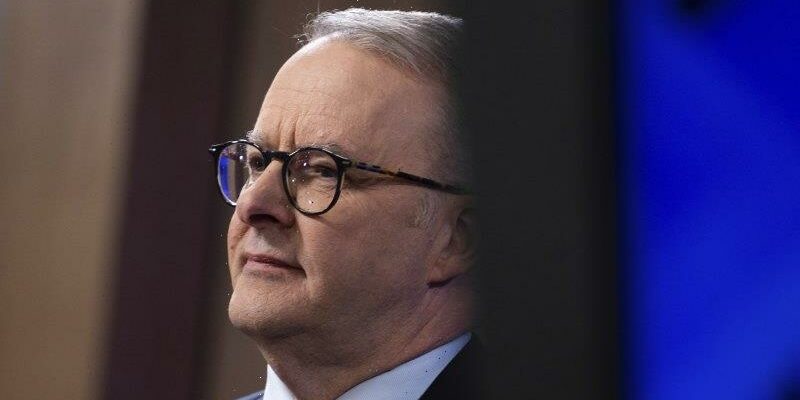 Opposition Leader Anthony Albanese is doing a bit of a breakfast television blitz this morning, with three interviews scheduled within a 40-minute period.

The Labor leader’s first appearance was on ABC News Breakfast where he stood outside his old council housing home in Camperdown, Sydney. Albanese will head to the seat of Bennelong this morning, before jetting to Brisbane. Tomorrow, he’ll campaign in key seats in Victoria, South Australia and Tasmania. 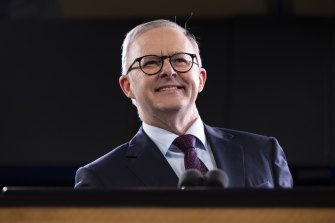 Co-host Lisa Millar asked if visiting five states in the last 48 hours of the election campaign shows the election is tighter than originally anticipated.

Here’s what the opposition leader had to say:

Elections in Australia are always really tight – that’s the truth. And I’ll be in Bennelong a bit later this morning, but then I’ll be going to Queensland, where I’ll be in Longman, in Dickson, in Ryan and in Petrie. And then later on I will be in South Australia, Tasmania, and Victoria over the next couple of days. So, it will be a busy time.

Albanese then refused to be drawn on the incident last night where Prime Minister Scott Morrison accidentally flattened a young boy during a practice soccer game in Devonport in Tasmania.

He described the footage as “interesting pictures” and said he was glad to hear the eight-year-old was OK.

Birmingham would rather have shoulder-charging PM than Albanese

Minister for Finance Simon Birmingham has managed to turn an incident where Prime Minister Scott Morrison accidentally shoulder-charged a small child on a soccer field yesterday into a dig at Opposition Leader Anthony Albanese.

When asked about the incident on Nine’s Today show earlier this morning, the Liberal senator said he’d rather have a leader who “stumbles on the soccer pitch than one who stumbles over the unemployment rate”. 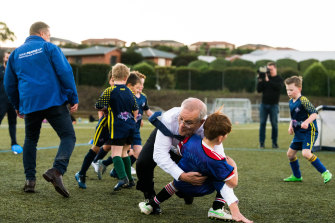 The PM accidentally running into the young boy while campaigning in Tasmania. Credit:James Brickwood

Morrison accidentally shoulder-charged 8-year-old Luca Fauvette at the Devonport Strikers soccer club yesterday afternoon. Those close to the boy have assured everyone he is fine.

“How good is young Luca,” Birmingham added. “What a great sport he is.”

Labor will take a knife to some of the Coalition’s spending promises to recover cash for its election pledges in a battle over the budget while it launches a campaign blitz across marginal seats in the final days of the campaign.

The Labor cuts will add to $750 million in savings the party announced yesterday in a step towards revealing full election costings to pay for commitments such as a childcare policy that reduces fees for most families. 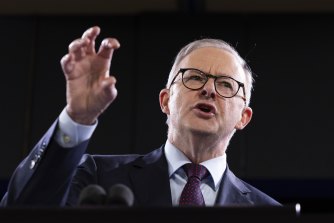 Labor leader Anthony Albanese is planning to claw back savings from the budget by slashing Coalition grant spending.Credit:Alex Ellinghausen

But the government seized on the Labor cuts to regional programs to warn that local projects would be cancelled if Labor leader Anthony Albanese gained power at the election this Saturday.

Labor treasury spokesman Jim Chalmers and finance spokeswoman Katy Gallagher are today tipped to produce costings that show deeper deficits and higher debt compared with the Coalition in the next four years, but they have also been looking for ways to cut what they regard as waste in government spending.

Australians have backed an increase in the minimum wage after an election row over the impact of inflation on household earnings, with 67 per cent of voters supporting a higher base pay despite government warnings about a chain reaction that could hurt the economy.

In a dispute that is shaping the final stage of the election campaign, a majority of uncommitted voters favour an increase in the $20.33 hourly rate after Labor leader Anthony Albanese said he “absolutely” believed the rate should rise by 5.1 per cent to keep up with inflation. 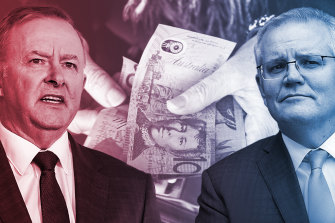 Australians have backed an increase in the minimum wage after an election row over the impact of inflation on household earnings.Credit:The Age and Sydney Morning Herald

Prime Minister Scott Morrison called Albanese a “loose unit on the economy” for making that remark but only 16 per cent of voters believe the minimum wage should stay at its current rate.

An exclusive survey shows that 40 per cent of respondents support a 5.1 per cent boost while another 27 per cent support an increase by a smaller amount.

With both leaders racing to secure wavering voters before the polls close on Saturday, the survey reveals 34 per cent of uncommitted voters favour the 5.1 per cent increase and 23 per cent support a smaller increase.

More on the polling here.

It’s Thursday, May 19. I’m Broede Carmody and I’ll be anchoring our live coverage for the first half of the morning. Latika Bourke will be on later to cover the blow-by-blow of the election campaign.