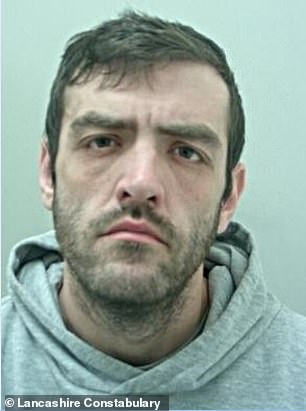 A convicted EDL thug beat the mother of his child for four hours in a horrifying ordeal which left her vomiting blood, until she fled screaming into the street wearing nothing but a hoodie.

Domestic abuser Bernard Holmes, 33 landed punch after punch on partner Gemma Hudson, 29, in his Blackburn home on the day he asked her to marry him.

Ms Hudson, who has bravely spoken out following Holmes’s conviction for ABH, said he also choked her, headbutted her, and ripped out chunks of her hair.

He also threw her to the floor, kicked her, banged her head against a wall and a radiator, and bit her on the face and mouth in the sickening four-hour attack on April 14.

Following the beating Ms Hudson was put into an induced coma for three days with a bleed on the brain. She had suffered soft tissue damage to the jaw, which meant she was forced to endure a liquid diet and had bruises all over her face and body, as well as bite marks.

Gemma Hudson, 29, was put in an induced coma after the horrifying four-hour attack

While Ms Hudson was in hospital Holmes, who was jailed for 18 months in 2012 for leading a violent English Defence League protest in Blackburn, was texting her telling her to ‘stop milking it’.

The had previously been jailed for two years in 2010 for an attack outside a bar which left his victim with catastrophic injuries.

Ms Hudson has spoken out to encourage women to use the Domestic Violence Disclosure Scheme (often called ‘Clare’s Law’) which gives any member of the public the right to ask the police if their partner may pose a risk to them.

Cowardly Holmes fled after beating Ms Hudson – the mother of one of his two children – but gave himself in after 10 days.

Reliving the terrifying attack Ms Hudson, who works in a care home, told the Lancashire Telegraph: ‘I went to his house at about 3pm. For an hour it was fine. From about 4pm to 8pm it was constant beating.’ 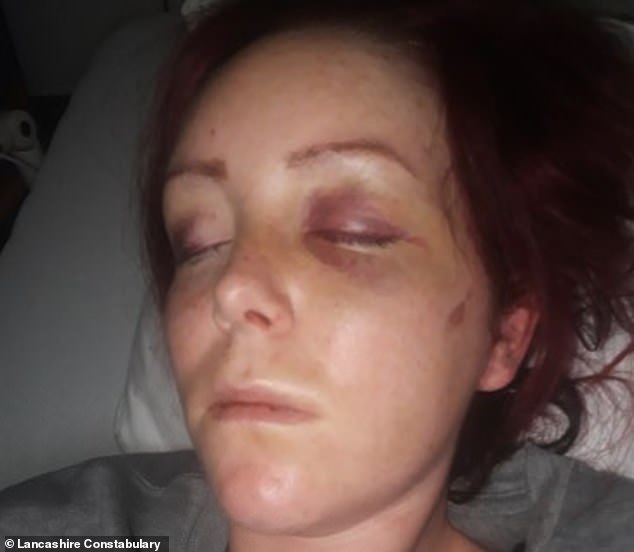 She explained he scrolled through her phone, discovered last-minute arrangements  to attend a friends’ hen party, and replied without her knowledge that she was not going.

‘The next minute he was raining punches on me’, she sai, ‘to the point I was sick all over his living room floor. He took pictures of me being sick and shared them on Whatsapp.

‘He would ask me questions while strangling me. He would count down “five, four, three, two, one” then he would either punch me, headbutt me or bite the side of me face and then floor me. He would then pick me back up by my hair or my throat.

‘After a while I asked to wash my mouth out. I could feel myself choking on my own blood. I put the tap on to pretend I was washing my mouth out and managed to run out the door. All I had on was one of his hoodies. I had nothing on my feet.

‘I legged it to the next street to get help. He was seen on CCTV chasing me round the street and round a car. When everyone came out because they could hear me screaming he ran off and was on the run from the police for 10 days.’

Ms Hudson, who met Holmes while stewarding at Accrington Stanley two years ago, said she was aware of his past not the full extent of his violent criminal history, and said she wished she had looked into Clare’s Law when she met him and encouraged other women to do the same.

Clare’s Law: how you can ask police if your partner is an abuser

The Domestic Violence Disclosure Scheme (DVDS) is often called ‘Clare’s Law’ after the landmark case that led to it.

Clare’s Law gives any member of the public the right to ask the police if their partner may pose a risk to them.

A member of the public can also make enquiries into the partner of a close friend or family member.

To apply you must go to a police station in person, and discuss your concerns and situation with a police officer or staff member.

Police and partner agencies will then carry out a range of checks.

If these reveal a record of abusive offences, or suggest a risk of violence or abuse, they will consider sharing this information.

The disclosure will usually be made in person, to the person at risk, at a time and place agreed in advance to be safe.

During their relationship which she described as being ‘on and off like a light’, Ms Hudson said Holmes assaulted her on more than one occasion – although she never reported that to the police – would regularly accuse her of cheating on him, throw her belongings out of the car, kick her out of the car and make her walk home and verbally abuse her.

Ms Hudson, of Oswaldtwistle, said she has now lost confidence and fears reprisals.

She added: ‘I do regret meeting him. I should have listened to everybody else who said he was a girl beater and violent.

‘The only good thing that has come out of this is my son.’

Holmes, who was jailed for 28 months in 2010 for leaving victim Sean Baxendale with catastrophic injuries in a two-punch attack outside Bar Ibiza in Blackburn, pleaded guilty to ABH and harassment.

The family of the victim, who had to have part of his skull removed and was left with permanent brain injuries, spoke out against what they said was a lenient sentence.

Det Con David Richardson said: ‘This was a nasty and sustained attack, leading to significant injuries.

‘The police will continue to deal robustly with perpetrators of domestic violence and put them before the courts’.

The national 24-hour Domestic Violence freephone helpline number is 0808 2000 247. The service is run in partnership between Women’s Aid and Refuge.