"I will put forward a bill to hold early parliamentary elections on Monday," Diab said in a televised address on Saturday, local time. "I call on all political parties to agree on the next stage … I am with [the] Lebanese aspiring for change." 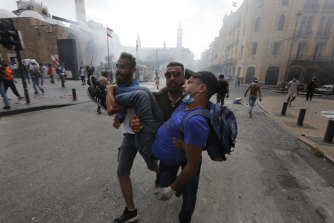 Diab floated the proposal as thousands of protesters, furious with their leaders after Tuesday's monumental blast at the Beirut port, took to the city streets to demand drastic reforms.

"The scale of the catastrophe is bigger than anyone can imagine," Diab said, referring to the blast. "We are in a state of emergency."

Protests escalated into clashes between protesters and police as furious residents mourned the victims and called for the removal of what they described as "corrupt politicians".

Police used tear gas to disperse the protesters, a number of whom stormed several government buildings, including the ministries of foreign affairs, economy and energy, witnesses said.

Late on Saturday, the Lebanese army succeeding in driving protesters out of the ministries they had briefly broken into and vandalised, burning images of Lebanese President Michel Aoun.

At the Foreign Ministry, demonstrators raised a huge placard at the entrance reading: "Beirut is the capital of revolution," Lebanese privately owned television MTV reported.

"We want the corrupt leaders of Lebanon to know that these ministries are for the people of Lebanon and not for them," shouted one protester at the scene. 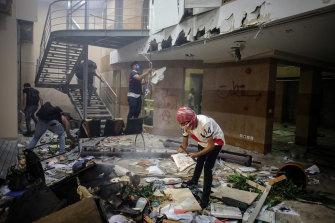 Protesters break into the Lebanese Banks Association (ABL) headquarters during a demonstration in Beirut on Saturday.Credit:Bloomberg

At least one person, a police officer, was killed after being "attacked" by protesters while "helping people trapped" inside a hotel in central Beirut, the country's Internal Security Force said in a tweet.

The Lebanese Red Cross meanwhile said at least 238 people had been injured in Saturday's clashes, 63 of whom were transferred to hospitals. Eyewitnesses said shots had been heard near to the parliament building.

Earlier, crowds packed the roads leading to the city's central Martyr Square, banging on the iron fences on the pavements in a demonstration of their fury.

A call to join a march from ground zero of the blast site towards the square in Beirut's central district asked participants to wear black in a sign of mourning for the victims.