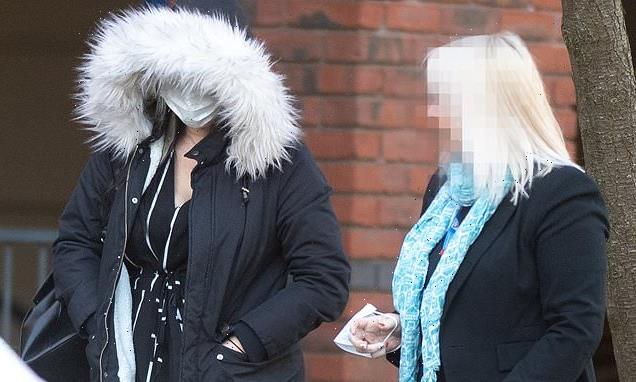 Drink driver, 24, left her boyfriend for dead in road after he climbed onto her bonnet and told her to ‘run me over’ following row 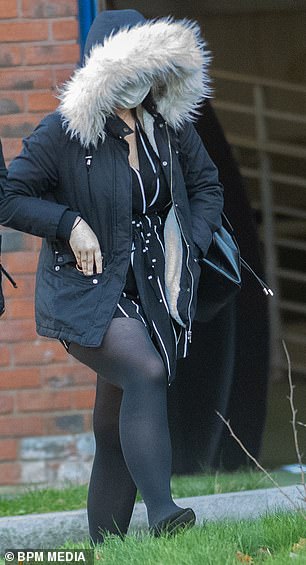 A drink-driver left her ex-boyfriend for dead in the road after he deliberately lay on her bonnet and shouted ‘run me over’.

Natasha Dulson, 24, had drunk a bottle of wine while visiting her former partner’s sister at an address in Newcastle-under-Lyme in Staffordshire on February 25.

After leaving in the early hours of the following morning, Dulson and her ex got into her white Mini to wait for a taxi, but an argument then broke out between them, Stoke-on-Trent Crown Court heard.

The man bit Dulson’s nose and when she pushed him off he bit her thumb, and when she tried to call her mother for help the ex-boyfriend started striking the dashboard, the court was told.

Dulson feared for her safety and pulled off but then stopped, and her partner then got out of the car and lay across the bonnet with his hands up to the windscreen saying ‘just run me over then’.

The defendant then drove off for a second time and her ex was thrown from the vehicle on to the road, where he lay unconscious after suffering head injuries.

Residents and paramedics gave him first aid before he was taken to hospital.

Dulson, of Porthill, Staffordshire, returned to the scene and provided a positive roadside breath test, showing she was nearly two-and-a-half times the legal limit.

She admitted dangerous driving and drink-driving, but her plea was on a basis she had been in a relationship with the man and was the victim of domestic violence.

Dulson was banned from driving for 20 months – and until she passes an extended test. She was also handed a two-year community order requiring her to complete a rehabilitation activity for 20 days, with 140 hours of unpaid work.

The court had heard that Dulson and her partner had become close again during lockdown and she agreed to go for a meal at his sister’s house.

The man became ill-tempered and argued with his sister.

Prosecutor Emma Rutherford said a resident of Stratford Avenue in May Bank heard shouting at 1.30am on February 26.

Miss Rutherford said: ‘He looked out the window and saw a white Mini parked on the opposite side of the road. A man was in the front passenger seat. He did not see the driver (the defendant) but could hear a female voice and could hear people were arguing. He heard the defendant shout, ”Get out”.

‘He saw the man get out and stand in front of the bonnet. He was spread across the bonnet with his hands up to the windscreen. He said, ”Just run me over then”.

‘He saw the car pull off. It turned right into Downing Avenue.’

At 1.50am a resident heard shouting in the street. He saw a man lying in the road. He could see a white Mini parked next to him. He went outside and saw the defendant pull off in the Mini at speed. 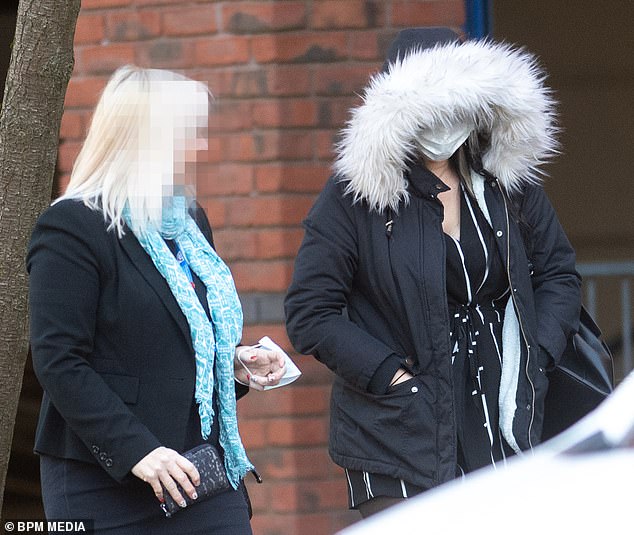 Dulson (right) admitted dangerous driving and drink-driving, but her plea was on a basis she had been in a relationship with the man and was the victim of domestic violence

‘The man was unconscious. He and his wife administered first aid and contacted the emergency services.

‘A few minutes later the defendant returned at speed. He formed the view she was going to hit them. He stood up and held his hand up. She stopped the vehicle before driving off.’

Police arrived and saw the Mini pull away. They followed. The officer noticed she smelt of alcohol and was hysterical.

Dulson said she had been assaulted by the man and provided a positive roadside breath test before being taken to custody.

The man had a head wound was bleeding. He was taken to hospital by ambulance. His injuries were deemed not life-threatening or life-changing.

In her police interview the defendant said she had consumed a bottle of wine through the night but did not feel drunk.

She accepted driving off and her driving was dangerous.

Amrisha Parathalingham, mitigating, said the defendant has no previous convictions and has sought professional help since her arrest.

Judge Paul Glenn said: ‘Your decision to drive, having been drinking with his sister, was stupid. It seems to have been spontaneous. There were plainly other options available to you. You drove about one-and-a-half to two miles and your route must have taken you through Newcastle town centre.

‘Having subsequently been assaulted after you stopped, I accept you would have been frightened.

‘He was standing directly in front of your car or on the bonnet when you decided to drive off in an aggressive manner.

‘You did not drive for all that long before he was thrown off and left lying in the street apparently unconscious. It is fortunate there was no other traffic about as he could have been run over.

‘I accept you are remorseful. The prospect of you getting into work is a good one. Importantly, you seem to have sought professional help and you have made a real effort.

‘I accept the risk of you re-offending is low and I do not regard this as you using your vehicle intentionally as a weapon. If I did I would send you to prison. But I do not think that is necessary in this case.’