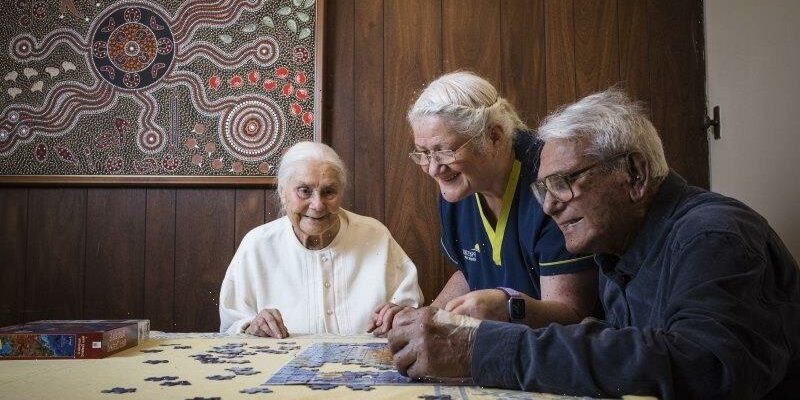 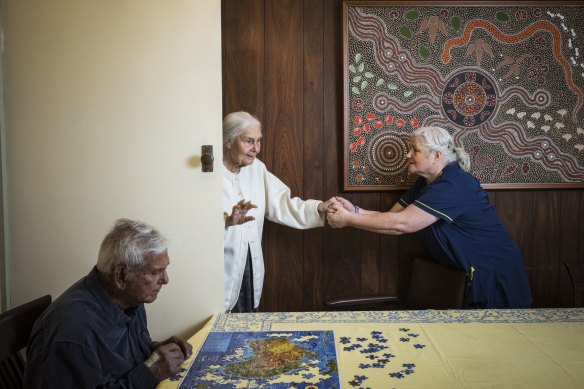 Maria McCreadie likes to tell friends she gets paid to sleep. For 14 years, the Bayswater resident has worked as a home carer to older people, often staying overnight in their homes and helping with tasks like preparing meals or getting changed.

She helps one client, who cannot stand, get into pyjamas and then bed using a standing hoist. “Then I give her a foot massage so she can get to sleep a little better, and so her feet are warm.”

Three mornings a week, she helps Box Hill couple Dorothy Van Gramberg, 89, and Joseph, 94, shower and dress, and makes them breakfast and lunch.

“They’re a lovely couple,” says 65-year-old McCreadie, who is part of a rapidly growing army of carers across Australia, paid for by the federal government’s home care funding packages.

Simultaneously, new figures obtained by The Age and The Sydney Morning Herald show the daunting financial challenges operators of aged care homes face from a 25 per cent pay claim by unions, for a low-paid sector in which 83 per cent of workers are women. Accountancy firm StewartBrown finds that pay increases and other factors will add $9.3 billion each year just to maintain current conditions in aged care, on top of the $23.6 billion the Australian government already spends.

At the same time, a new plan to be released on Thursday by New Zealand operator Ryman Healthcare urges Canberra to adopt a “continuum of care” approach largely practised in its homeland. It would see a rapid expansion across Australia of retirement villages that are combined with aged care centres, so residents can age in one place.

Many are wondering whether Australia’s nursing home model should change dramatically.

Among them is geriatrician Joseph Ibrahim, who in June told a conference of geriatric medicine specialists that Australia should get rid of all aged care homes. It did not go well. 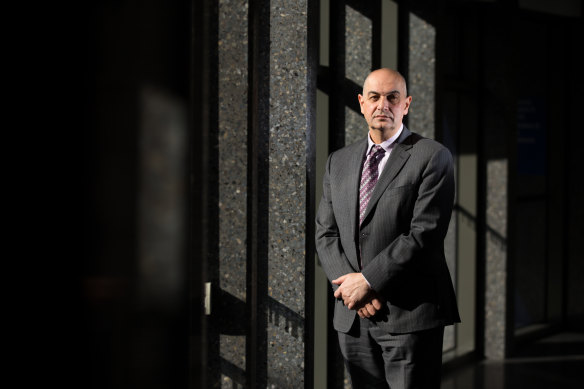 “Most found it confronting and considered it a foolhardy proposal,” the Monash University professor and aged care expert says.

Like many in aged care professions, Ibrahim wants more public money directed into home care. Its growth has already been stratospheric: from 60,000 recipients in 2014 to a predicted 276,000 next June.

The federal government pays providers to deliver aged care services, and its Aged Care Financing Authority last year found the cost of providing in-home care to an individual was $25,000, compared with $71,000 for an aged care home.

StewartBrown partner Grant Corderoy says the eye-watering sums needed to keep the aged care model afloat make it clear taxpayers cannot solely continue to foot the bill. The wealthiest aged care consumers need to contribute more, he says, particularly in accommodation costs. “When you’re in an aged care home, the consumer is not paying an appropriate rental for their accommodation.” 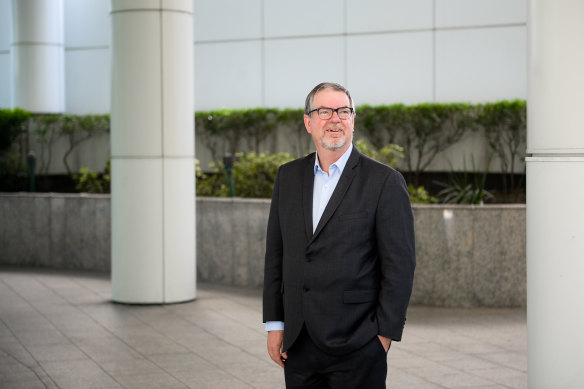 Most aged care operators have lost money since the pandemic began. One of Australia’s biggest providers, Regis, became the latest casualty this month, posting a $38.8 million loss.

Nursing homes have changed remarkably in the last decade, with most older people entering at the last feasible moment – often completely unable to support themselves.

And it’s not always possible to enter a home at the moment. Across Australia, many people are stuck in hospitals waiting for a nursing home bed to become available due to workforce shortages.

“Aged care providers are closing because they can’t get staff, which means older people are stuck in hospitals,” says Sarah Newman, general manager of home services at BaptistCare NSW & ACT, one of Australia’s biggest in-home care providers, with 8000 clients.

A hospital bed costs significantly more than home care, which Newman estimates at $145 a day, while a day in a nursing home costs the public around $225. The health pricing authority’s most recent daily overall cost to taxpayers for an acute patient in a Victorian hospital is just over $6000 a day.

Newman believes a mix of home care combined with more retirement villages, where communities of older people who don’t need permanent healthcare can access limited assistance, will become the norm. 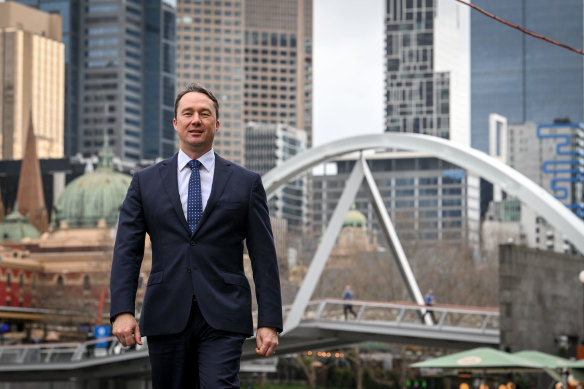 The pandemic has placed huge pressure on his company’s workforce. “We’ve never before had to say no to any new business,” said McDonald. Telling new clients he didn’t have the staff to help was “heartbreaking; you’re trying to make their lives better, not push the headache back onto them”.

McDonald said the home care packages on offer from the federal government are “a drop in the ocean” compared to community demand. “Some people that could stay at home [with a higher] level of care, the funding doesn’t facilitate it,” he said. Many ended up in aged care homes as a result. 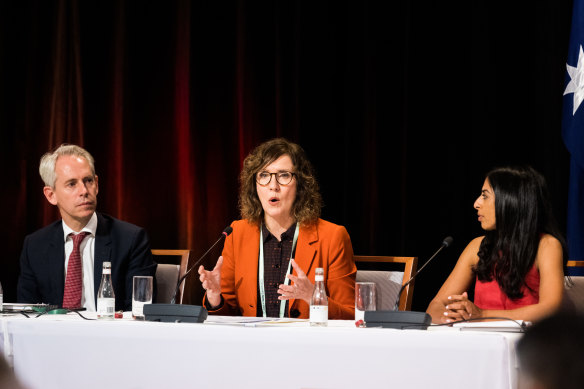 Annie Butler, the federal secretary of the Australian Nursing and Midwifery Federation, at this month’s jobs and skills summit.Credit:James Brickwood

And he says the knowledge in the community about in-home care is sometimes extremely marginal. “There are still families we talk to who don’t know in-home care is an option. And they often say to us, ‘OK, we’ll get that care but at what point do we have to go into a nursing home?’ There’s this assumption that this is just a short-term fix.”

Australian Nursing and Midwifery Federation federal secretary Annie Butler says that despite “the parlous state of residential aged care”, it is the only reality possible for many families. But she wants privatised aged care reviewed by the Albanese government. “Wouldn’t it be a more efficient use of the government’s funds just to directly provide aged care?”

She points to 179 publicly run aged care homes in Victoria – many in regional areas and attached to hospitals. Just 3 per cent of coronavirus aged care deaths in the state have occurred in public homes. Of 2523 deaths in Victorian aged care, 97 per cent were in private homes.

Butler says there needs to be a wider acceptance that aged care homes are health settings, not purely residential homes as many operators have long tried to argue.

“Yes, it’s where they live, but it’s a health care setting,” says Butler, who believes operators make this argument so they can pay personal carers wages lower than that of nurses. “Given that we’re living longer, residential care has progressed now to what’s really sub-acute care – it’s not acute hospital care, but it’s the next level down.”

Victoria’s public homes generally have higher-care-needs residents. “They also have proper staffing and proper resourcing,” says Butler. “The homes are better run but simpler: it’s not about a grand piano and chandeliers and fancy artwork. There’s something wrong with the profit imperative in aged care.”

She says creating public aged care homes would require states to run centres with funding from the Commonwealth. “It’d be a more efficient use of public money – but there would be more than a few vested interests you’d have to cross.”

Monash’s Ibrahim says aged care compares appallingly to Australia’s hospital system. “In aged care, no one starts from the premise that they are going to end up in it, so it’s not an area that’s as well thought through as hospitals and health care.”

He says Australians want as much home-based care as possible, up to the point where – often due to dementia – they need to enter an aged care facility. But he argues the model put in place by former prime minister John Howard in 1997 to fund them is no longer fit for purpose.

“The proposition that we can have publicly funded residential aged care? Absolutely, of course we can.

“But if you look at aged care from what society generally wants when we get old, you come up with a very different answer than the solution we have now.”