Police expect to solve four homicides and say they have stopped 21 planned underworld killings in Melbourne as part of an international investigation using encrypted message technology.

The Australian Federal Police and the FBI joined forces for the three-year operation, dubbed the “sting of the century”, which culminated in the arrest of dozens of alleged bikie and mafia figures in raids this week. 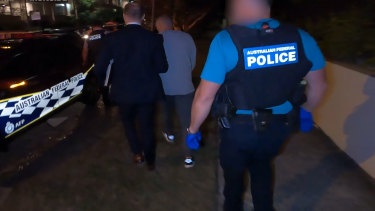 Armed police raided 37 properties across Victoria, arresting 32 people on Monday and seizing more than a tonne of illicit drugs, as well as luxury cars, cash, guns and gold bullion, as part of Operation Ironside.

The ambitious operation used An0m – an encrypted app favoured by criminals worldwide – to covertly monitor a vast trove of communications about the global drug trade and other illegal activities.

Police said those arrested in Victoria included nine patched members of the Comanchero outlaw motorcycle gang and their sergeant-at-arms in suburbs including Sydenham, Footscray, Glenroy, Elwood and Port Melbourne.

Victoria Police Deputy Commissioner Ross Guenther said a string of extradition orders would probably follow after revealing criminal kingpins who had fled overseas in the past decade were among those using the encrypted messaging app to give orders to those still living in Australia.

“There will be people that will be brought back to this country, subject to the approval of their extradition orders, as a result of this operation.

“It is alleged some of the world’s most senior criminals have used this platform.” 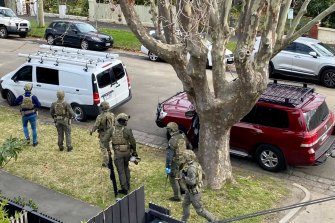 They include the deaths of Muhamed Yucel in Keysborough in 2017, Zabi Ezedyar in Narre Warren in 2017 and Ikenasio Tuivasa in Ravenhall last month. All three are believed to be victims of mistaken identity. The fourth case is yet to be revealed due to active investigations, police said.

“We have very strong indications that the murders were commissioned and committed by people affiliated to the Comanchero outlaw motorcycle gang,” Mr Hill said.

“We believe those matters will be resolved sooner rather than later.”

Mr Hill said conversations about 21 planned underworld killings, mainly between rival gangs, had been intercepted using the app. They included serious threats to kill. In one incident police descended on two cars with false numbers plates parked on a suburban Melbourne street. Officers believed the men were planning to carry out a “hit” nearby.

Federal Police Assistant Commissioner Bruce Giles said the sting followed the successful take-down in 2018 of encryption service Phantom Secure, which had 14,000 users in Australia. He said authorities then moved to infiltrate An0m, a new encrypted messaging service, and became involved just before the product was due to be released to the criminal market.

He said those using An0m had to buy a device – designed to look like a mobile phone – which trades on the black market for $1700.

Working with the FBI, AFP employees built a system to monitor key words and “imminent threats” sent via the messaging service with the help of new legislation here and in the US.

About 1650 of the devices are believed to be in Australia and 9000 globally, Mr Giles said. 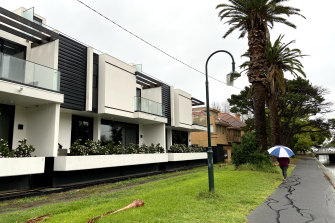 An apartment building in Elwood that was involved in the police raids on Monday night.Credit:Joe Armao

He said the operation had led to the arrest of 220 people across the county. About 3.7 tonnes of drugs, 104 weapons and $45 million in cash were also seized in the operation involving more than 4000 police officers. Investigators will now “interrogate” three years of encrypted data, with more arrests foreshadowed.

A number of men faced the Melbourne Magistrates Court on Tuesday in relation to the sting, with several applying for bail.

During one bail application, the court heard how a syndicate used the encrypted technology with code names such as “Chief Reason” and “Arrive Music” to plan drug deals that were allegedly carried out in the car parks of a Bunnings store and a Chemists Warehouse.

In a separate proceeding, Mark Joannou, 41, applied for bail after police charged him with two counts of conspiracy to import commercial quantities of methamphetamine and cocaine.

Encrypted chat messages between Mr Joannou and another syndicate member show them allegedly discussing a planned import from Los Angeles and a second import from India, which together involved about 1.6 tonnes of drugs with a street value of $1 billion.

Detective Senior Constable Cassi Bond said Mr Joannou’s alleged role in the syndicate was as “an investor”. When police raided his home this week, they said they found $30,000 in cash concealed in a wall behind the bathroom and a further $400,000 in the walls around his home.

While police had concerns that Mr Joannou would conceal evidence, contact others in the syndicate and jeopardise investigations if released on bail, his lawyer Daniel Sala said it would be difficult to hinder an investigation that was “well and truly in the public domain”.

A $100,000 surety was offered by a colleague of Mr Joannou, but the prosecutor said given the size of the planned drug imports and that they had found almost $500,000 in the accused’s walls, it was “woefully inadequate” to bring the court any comfort.

A magistrate will make a decision about bail on Thursday.