This is the moment engineers were left red-faced when two diggers got stuck in the mud trying to recover a trapped dumper truck.

The truck sank into the surface of the lagoon at Poole Park in Dorset while carrying out dredging works as part of a £625,000 council project.

A yellow digger, which can weigh up to 24 tonnes or three fully grown elephants, was sent to its rescue but it too suffered the same misfortune and became wedged in the mud. 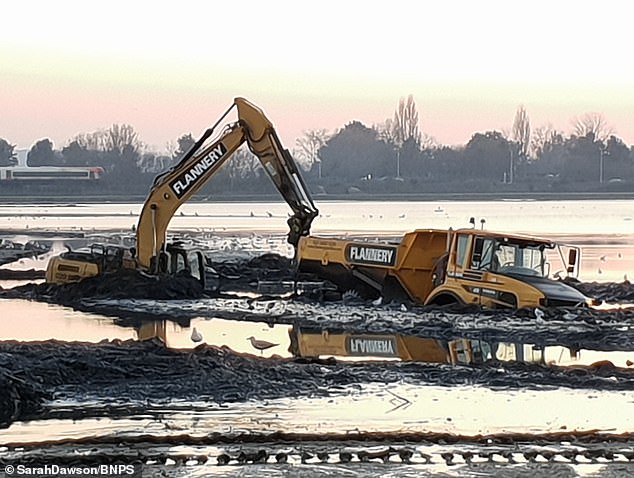 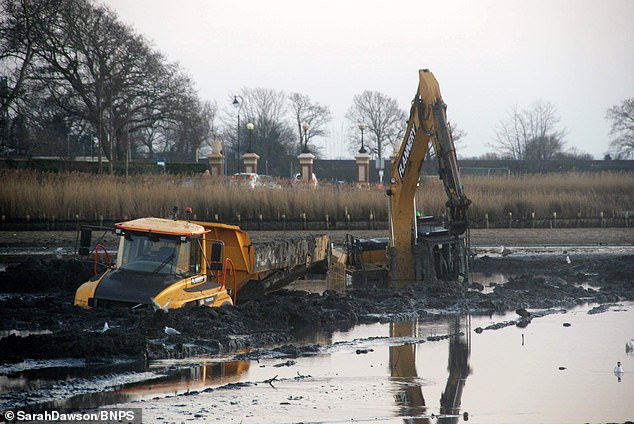 Another digger was then sent in a bid to rescue the first one, but also met its match and got stuck in the mud.

One of the diggers has now reportedly been retrieved even though the other digger and the dump truck are still stuck.

One user, who witnessed the scene, said: ‘Fun and games at Poole Park.

Benny Gould added: ‘Who would put a dumper truck in there!’

The work at Poole Park is expected to take around 15 weeks and be completed in late April.

Poole Borough Council, who are responsible for the project, labelled the mishap an ‘unfortunate’ event and said the vehicles getting trapped will not cause ‘lasting detriment’ to the environment.

Borough of Poole’s head of environmental services, Ian Poultney, said: ‘These events are unfortunate but are part of operational occurrences when dealing with conditions in this type of environment.

‘All the necessary steps were taken to ensure there was no lasting detriment to the environment and work is programmed to recover the vehicles and to continue dredging works in the lagoon.’