Washington: US President Donald Trump has positioned himself as an enemy of the Washington elite in his acceptance speech at the Republican National Convention, dubbing his Democratic rival Joe Biden the "destroyer of American greatness" and a "Trojan horse for socialism".

In an unprecedented move, Trump delivered his speech from the South Lawn of the White House, a decision critics said was a flagrant abuse of presidential authority. 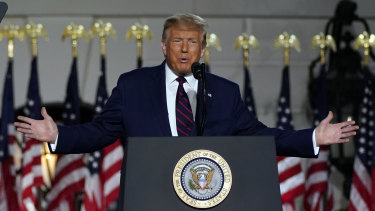 US President Donald Trump speaks from the South Lawn of the White House on the fourth day of the Republican National Convention. Credit:AP

"At no time before have voters faced a clearer choice between two parties, two visions, two philosophies, or two agendas," Trump said of the November 3 election.

"This is the most important election in the history of our country."

The 1500 estimated audience members for Trump's speech were seated closely together, with few wearing masks.

The President referred only briefly to the pandemic that has claimed over 180,000 American lives and forced tens of millions into unemployment.

"We will produce a vaccine by the end of the year or maybe even sooner," he declared.

"Together we will crush this virus."

Even though he has been in power for four years, Trump returned to the populist themes that powered his successful 2016 campaign.

"Together, we have ended the rule of the failed political class and they are desperate to get their power back by any means necessary," he said.

"They are angry at me because instead of putting them first, I put America first."

Trump sought to draw a stark contrast with Biden on China, painting his opponent as part of a failed political elite that had sold out ordinary workers.

"Joe Biden's agenda is made in China, mine is made in the USA," he said.

"Washington insiders asked me not to stand up to China. They pleaded to let continue stealing our jobs, ripping us off and robbing our country blind. But I kept my word to the American People. We took the toughest, strongest, and hardest hitting action against China in US history."

Trump continued: "For 47 years, Joe Biden took the donations of blue-collar workers, gave them hugs and even kisses, and told them he felt their pain – and then he flew back to Washington and voted to ship their jobs to China."

Trump said Biden had spent "his entire career on the wrong side of history", referring to his support for free trade deals.

"Biden’s record is a shameful roll call of the most catastrophic betrayals and blunders in our lifetime," Trump said.

Walter Shaub, the director of the United States Office of Government Ethics under Barack Obama, blasted Trump's decision to deliver such a party-political speech from the White House.

"This abomination may be the most visible misuse of official position for private gain in America’s history," he said. "It is an abuse of the power entrusted to this man, the breach of a sacred trust."