A deep sea diver was left with arms and a chest like Popeye after a fishing accident off the coast of Pisco, in southern Peru.

Alejandro ‘Willy’ Ramos, 57, was deep sea diving for shellfish four years ago with a colleague and his son when a huge cargo ship cut across his vital air hose.

This was Willy’s only source of compressed air and though he was able to swim to the surface, the change in pressure caused irreparable damage to his chest and arms and added 30 kilos to his frame. 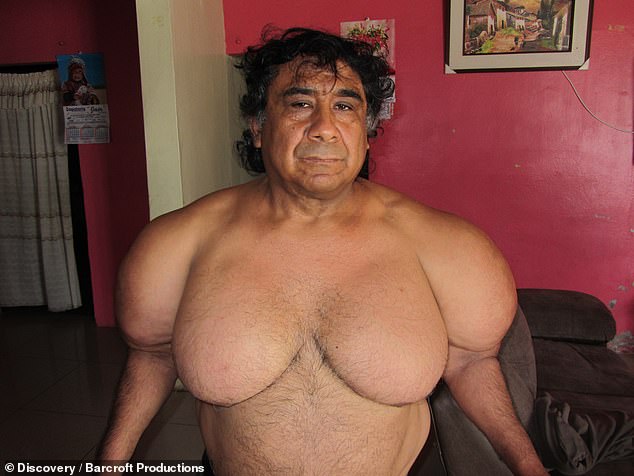 Willy Ramos, 57, gained 30kg after the fishing accident left him with swollen arms and a swollen chest 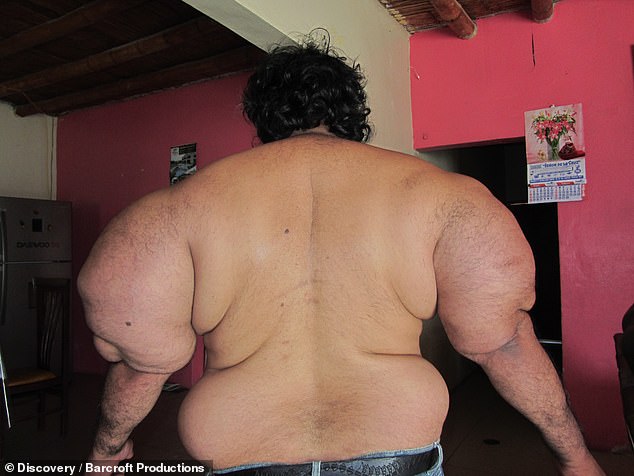 He swam up from 100 ft below and it is thought that nitrogen caused the damage to his pectorals and arms.

According to El Nacional, when diver’s bodies experience pressure under the sea nitrogen become compressed and is deposited in fatty tissue.

But when they swim back to the surface, the nitrogen expands back into its gaseous form and the bubbles can block the blood, known as decompression syndrome.

But because Willy needed air he did not have time to climb up slowly as divers must do to prevent damage. 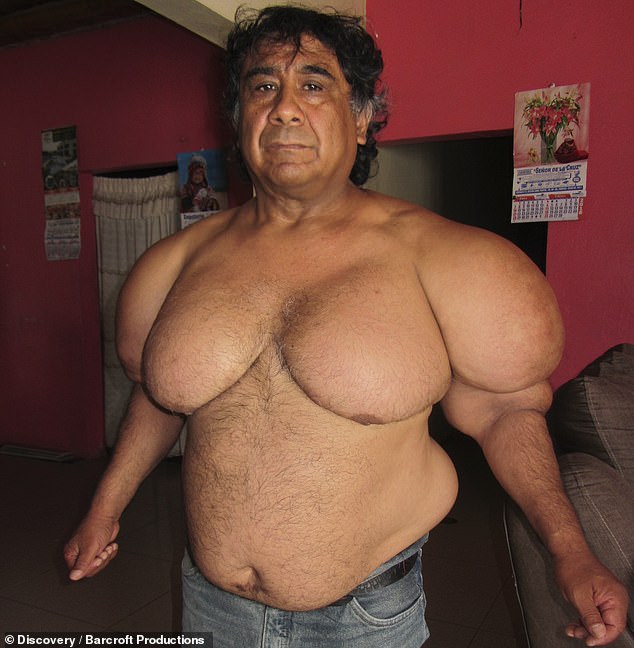 Willy at his home in Pisco, Peru where he shows how his condition has caused massive bloating to his upper body 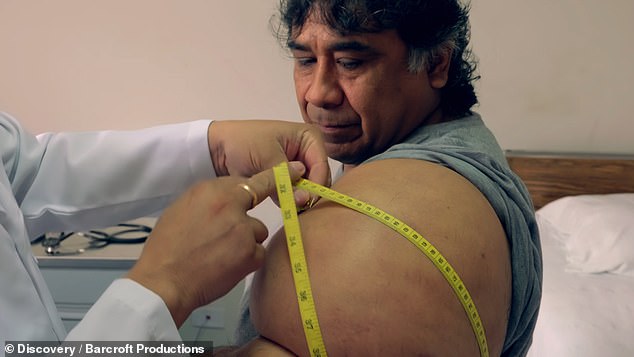 Alejandro Ramos, from Pisco in Peru, having his ballooned bicep measured by Dr Raul Aguado 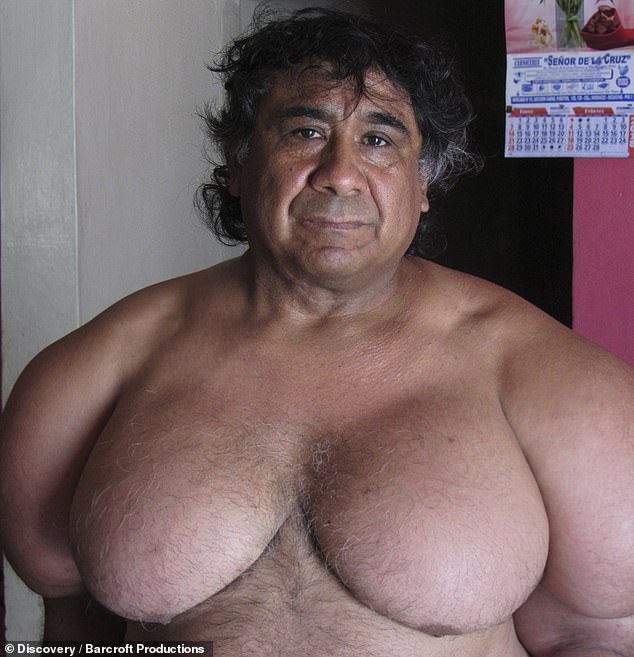 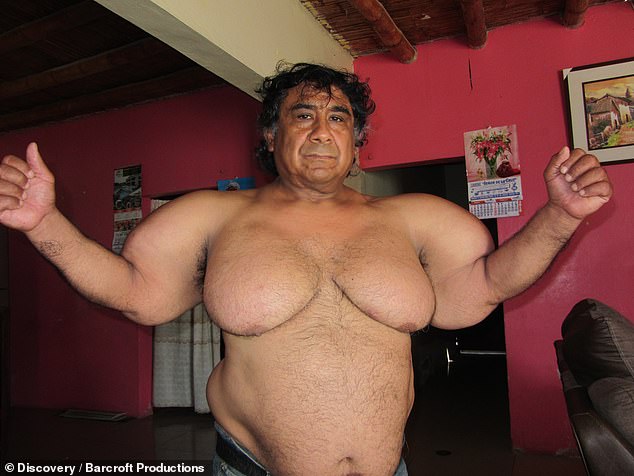 The newspaper reported that before the Naval Medical Centre looked at his special case, Willy had been embarrassed to live his home.

The bulky frame he had acquired made him feel uncomfortable in public and lack of funds meant he was unable to seek much treatment.

The father-of-two had to endure aching bones and his chest hissing when he breathed, the Venezuelan daily said.

Willy followed his father into the fishing business at the age of 30 and said that back then divers only had to go down about half the distance that he dove to on the day of the accident. 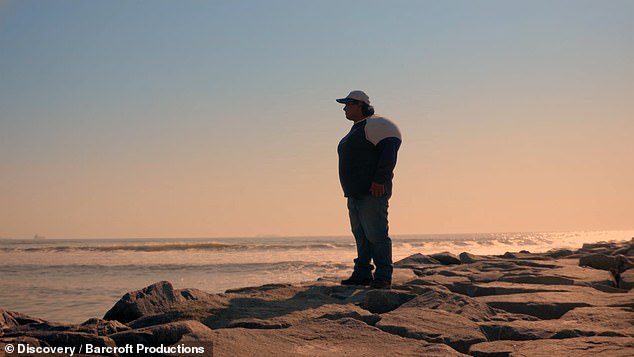 Willy Ramos standing on a rocky beach by the South Pacific Ocean in Pisco, Peru, where he still enjoys remembering his days as a fisherman 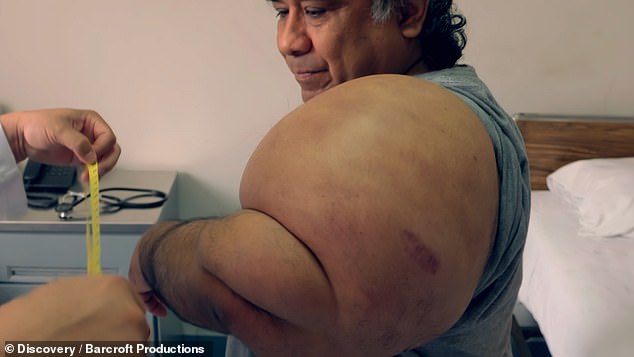 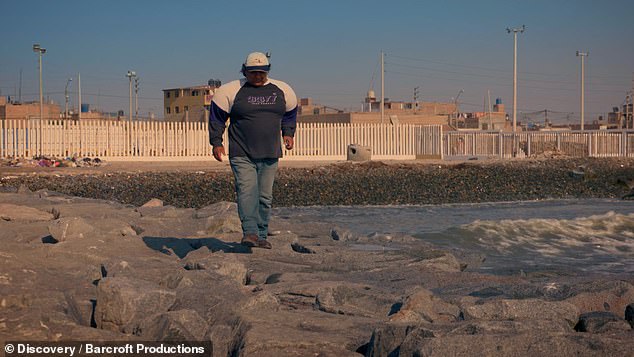 Bulky Willy Ramos looks like a body-builder as his pullover is tightly held to his huge arms and chest, after the accident saw him gain 30kg 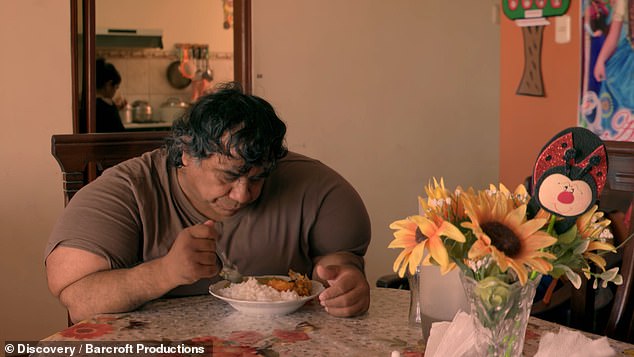 Willy Ramos enjoying a meal at his home in Pisco, Peru; although he might look like Popeye, he is not eating spinach

But shellfish had receded to the deeper waters due to over-fishing and that made things more dangerous.

Willy said he gets depressed about his deformity but thanks God that he is alive.

Doctors told El Nacional that treating the condition is difficult and requires a high-tech oxygen chamber where a higher percentage of oxygen in the air can help to repair the damaged tissue.

Unfortunately the treatment in the hyperbaric chamber became too expensive for Willy who lost his job as a result of his injuries.

As well as the pain he experiences in his arms, he also has difficulty walking and has damaged his hip from walking with the added weight, according to El Comercio.

He told El Nacional: ‘The state does not care for us.’