Mother-of-four, 36, who claimed £10,000 in disability benefits ‘because she could barely walk’ must repay it all… after being caught working out at the GYM three times a week

A mother-of-four was caught working out at the gym while claiming more than  £10,000 in disability payments – after she said she could barely walk.

Layla Leach claimed she could only walk 20 metres and as a result was awarded the highest level of benefit for immobility.

She was caught out after she was spotted at two gyms using weights, cardio equipment and the swimming pool up to three times per week. 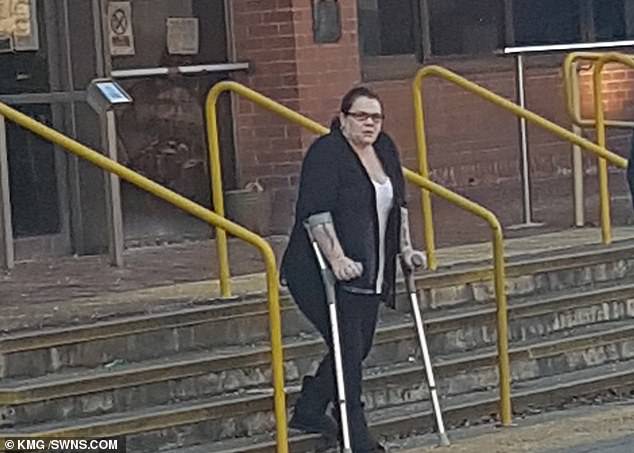 The 36-year-old was found guilty of dishonestly claiming the money by ‘making a false statement’.

She was also found guilty of failing to notify the Department for Work and Pensions (DWP) that her long-term health condition had improved.

Leach, from Ashford in Kent, called prosecutor John Bishop a ‘bully’ at Folkestone Magistrates’ Court and pleaded not guilty to both offences.

But she was ordered to pay back £10,047 in £20 monthly installments – meaning she will be 78-years-old when her debt to taxpayers is finally settled.

Mr Bishop told the court on Thursday that Leach lied to DWP officials for financial gain.

He added: ‘You wrote in your claim form that you could only walk 20 metres but you have just made clear to this court you don’t even know how far 20 metres is.

‘You say you attended the gyms on instruction of a doctor, but the gyms did not receive a medical note and there was no mention of your physical limitations.’

Leach was found working out at Ashford International Hotel and Anytime Fitness.

But Leach, who suffers from Fibromyalgia, claimed she was using the gym under a doctor’s recommendation to improve her health.

The court heard various evidence against her,  including a fitness instructor’s account of Leach using weights, cardio equipment and swimming pool up to three times a week.

Keith Betts, defending, said Leach’s family’s income was benefit-based and her ongoing medical condition meant she would be unfit for unpaid work.

He added that she was of ‘previous good character’ and had no previous convictions.

Leach was fined £85 and sentenced to two 12-week curfews from 7pm to 7am to run concurrently, and faces £660 in court costs.

Upon sentencing, the bench chairman said: ‘Her story changed and she contradicted herself a number of times.

‘The reason for our findings is that Mrs Leach is not a credible witness – we believe she had full understanding of the decision she made.

‘We believe the credibility of the gym instructor.’

A DWP spokesperson said: ‘Only a small minority of benefit claimants are dishonest, but cases like this show how we are catching those who cheat the system and divert taxpayers’ money from the people who need it.

‘We are determined to catch those we suspect of fraudulently claiming benefits by following up on tip-offs, undertaking surveillance and working with local councils.’